Critics says that the subject matter is out of touch with racial justice issues, and artist now regrets creating it 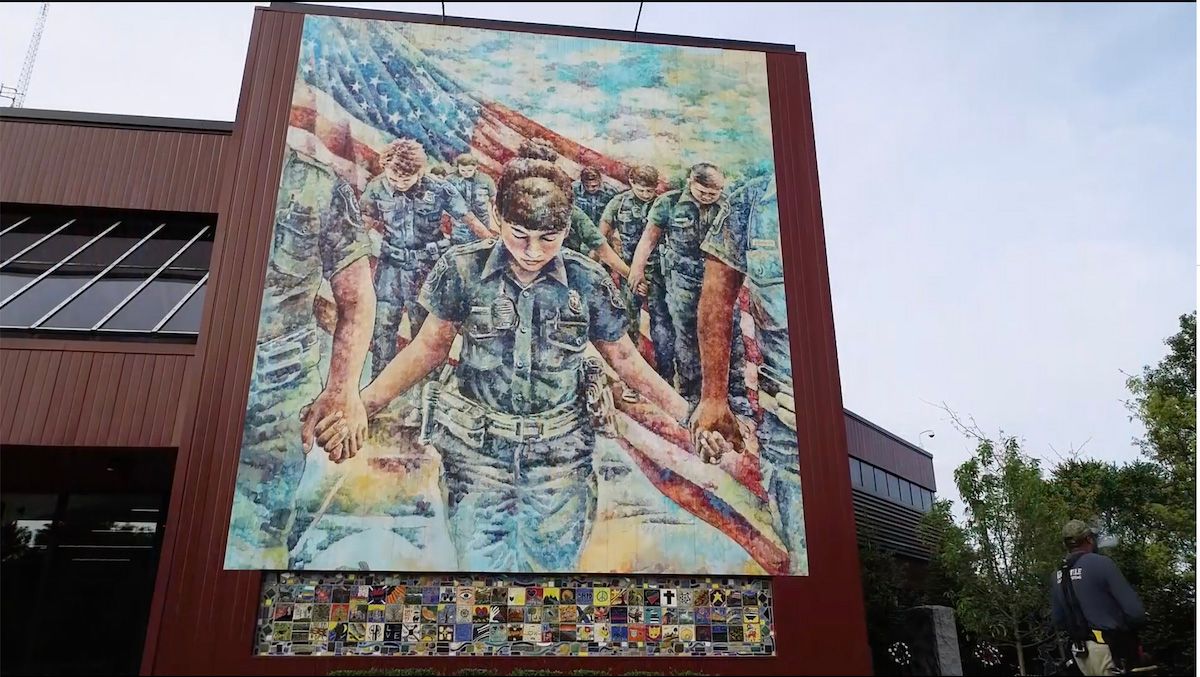 The mural To Serve and Protect, sponsored by the Detroit Institute of Arts was displayed outside the Sterling Heights, Michigan police department Courtesy of Sterling Heights City Hall

An outdoor mural sponsored by the Detroit Institute of Arts (DIA) depicting police officers joining hands in front of an American flag has drawn a torrent of social media criticism from artists, former and current museum employees and others who argue that it demonstrates that the institute is critically out of touch.

Even the Detroit artist who executed the mural outside a police station in Sterling Heights, Michigan, Nicole Macdonald, has now renounced it, saying that it champions racist forms of power at a time when the museum should be overwhelmingly concerned about justice for Detroit’s Black residents.

The 20-by-30ft mural was commissioned in 2018 and unveiled in a ribbon-cutting ceremony on 1 June by the DIA and by the city of Sterling Heights, a Detroit suburb. Titled To Serve and Protect, it was created through DIA’s Partners in Public Art (PiPA) programme, which cooperates with local communities to create lasting works of public art that are intended to create a sense of solidarity.

The mural depicting the officers with bowed heads and clasped hands with the flag in the background is placed above dozens of 8-inch tiles lined up in rows that were decorated by police officers and their families in painting sessions organised by the DIA.

The museum called attention to the mural in an Instagram post on 4 June, saying that it “represents officer families, service, honour and dedication to the city of Sterling Heights”. The post quickly drew indignant comments and was taken down on 6 June, with the institute explaining in a subsequent post that it had been removed “out of concern for individuals who were being personally targeted in the comments”. That post was also later taken down.

The DIA’s sponsorship of the mural was also condemned by artists, among them Kevin Beasley, Xaviera Simmons, Dawoud Bey and Sherina Rodriguez Sharpe. “The museum is in the heart of one of the largest black cities in this country and this what ya'll doing?” Beasley wrote on Instagram. He added, “No major art museum should be funding, promoting and partnering with police departments to create propaganda that ignores and washes over the abuse of power the police exercise on a daily basis.”

“With this mural and IG post, debuted on the day before Breonna Taylor's birthday, leadership has once again undermined the (award-winning) work that their own curators and staff poured into building trust in vulnerable Black and Brown communities,” Rodriguez Sharpe, who is based in Detroit, wrote on Instagram. “In this, leadership has caused harm to not only their own staff, but also the people they have promised to serve.” Taylor was killed by the police in her Louisville, Kentucky apartment in March 2020.

The employee group DIA Staff Action, a group of current and former employees that says it is working to improve working conditions at the institute, denounced the mural as “pro cop” and “out of touch”. “The leadership of @diadetroit continues to demonstrate that they are unable to lead our institution and serve the diverse communities of Detroit,” the group says on its Instagram page.

The group has circulated a petition since July 2020 calling for the resignation of the DIA’s director, Salvador Salort-Pons, and its board chairman, Eugene Gargaro Jr, known as one of Salort-Pons’s defenders. Salort-Pons, who has led the museum since 2015, has come under fire for employee complaints of autocratic behaviour and an insensitivity to race and gender, and the museum’s board has said that it is now monitoring his performance.

The avalanche of social media criticism involving the mural led Macdonald, who had attended the 1 June unveiling, to voice regret that she had ever agreed to create it. “I consider myself a socialist, against police brutality” and “pro-police reform”, the artist, who is white, said in a statement provided to the news site Deadline Detroit. “I feel completely sick about this and feel like I was used. The museum needs to be working with groups that are disenfranchised and in our city.” She told The New York Times that she now feels that the mural “represents those tenets of power that are historically racist.”

Part of the disconnect between the mural’s content and the artistic community’s reaction is rooted in how the PiPA works are commissioned. Under a millage funding system instituted in 2012, property taxes in three Detroit-area counties provide two-thirds of the museum’s operating budget. The DIA says the contracts governing that arrangement require the museum to satisfy what local residents want in collaborations like the mural or programmes like field trips for students. Still, the museum adds that it plans to apply more scrutiny going forward.

“Community-based projects such as these are part of the contract the DIA has with the counties that provide tax funding to pay for these projects, and require that they be driven by the community,” says a spokeswoman. “As required in the contract, the DIA hands over the authority of the project to the community.”

She adds, however, that the DIA initiated a process several months ago “to develop an application and review process for future public art projects to provide additional oversight beyond what is outlined in the contract. As this process is put in place, future PiPA proposals will go through a robust review process prior to the work commencing, culminating in approval from the host community’s city or township council.”

The DIA also says in a statement: “Since 2018, the year this mural was painted, much has transpired in our country and we understand and respect that many members of our community are hurt and angered. To support healing, we will continue investing in partnerships with community-based non-profits in the tri-county region led by and serving the Bipoc community.”

The city of Sterling Heights, which unlike Detroit is majority white, says meanwhile that the mural is not likely to come down. "Not only does public art enhance quality of life in a community, it also provides a method to break down barriers, provoke thought and create important community conversations," city officials said yesterday in a statement quoted by The Macomb Daily.

"The time has never been better to spark conversations around continuous improvement and promote a message of peace, love, unity, kindness and humility in service to our community, and we look forward to continuing to promote that message–through both this art and in our actions–for years to come.”