Diary of a pavilion: Wales in Venice

James Richards’s contribution to the Welsh presentation at the Biennale is a multifaceted installation set in a Castello church. Here, the entire process, from application to installation, is described by the exhibition’s curator— the director of visual arts for Chapter, in Cardiff

The shortlist for Cymru yn Fenis/Wales in Venice is announced and we’ve made it! Chapter’s proposal for an exhibition with James Richards has been selected, alongside tenders with the artists Richard Billingham and Clare Woods, by a panel including curators from across the art world. The next step is to prepare a full proposal for the interview in May. James is heading to São Paulo for a residency soon, so we need to start working on it straight away.

Interview day and James is still in São Paulo, so we Skype him in to the proceedings. It’s a fairly intense meeting in which we talk about our ambitions for the project as a whole. Alongside our plans for a world-class exhibition, it’s vital for us to consider how the exhibition will reflect back in Wales and focus international and national attention on other work from the country, and how we might create experiences and connections for galleries, curators and artists here.

The decision letter telling us that our project has been chosen arrives at my inbox. I call James, who’s now in New York, to tell him the news and swear him to secrecy until the announcement is made.

Our first trip to Venice to see the exhibition venue. We travel with Louise Wright, the commissioner for Wales in Venice, and Chapter’s technical manager Dean Woolford. The venue is Santa Maria Ausiliatrice, a former church and convent that today incorporates a community centre. It’s an intriguing and challenging mix of the ecclesiastical and historic with the utilitarian and functional, and we’re looking forward to exploring it and getting to grips with its inevitable quirks and nuances.

Our second recce in Venice and a chance to meet with the extended team, including James’s technical collaborator, Matt Fitts. We order in sound equipment and test the acoustics in the church—it’s our only chance to experiment before we return to Venice to install the exhibition, so it’s vital that we leave confident that the space can hold James’s ambitions for the sound installation he’s developing.

We update the Wales in Venice selection committee on our progress. It’s a chance for James to discuss his ideas, for the Chapter team to talk through planning and management, and for everyone to be reassured that we’re on track. We also book the bands for our opening party. It’s a platform to showcase some of the incredible music being produced in Wales today: our line-up features Gwenno, Meilyr Jones and the BBC Radio 1 DJ Huw Stephens.

James arrives in Cardiff for a two-month residency at Chapter. This gives us an excellent opportunity for a more intensive and intimate dialogue around the exhibition. We put out a call for students from the composition course at the Royal Welsh College of Music & Drama to work with James on his new sound installation. We select two students—Kirsten Evans and Samuel Williams—and James begins a series of improvised exchanges and recordings with them that will eventually also include some of the school’s percussion students.

Dean flies over to Venice to get the keys for the venue and the building adaptation begins. We have just three weeks to convert the space into our exhibition venue. Meanwhile, James heads to Chicago to finish work on the new video that he’s making in collaboration with the artist Steve Reinke. The starting point for their audio-visual conversation is some incredible archive material from a series of photographs and collages found in the archive of Albrecht Becker—a production designer, photographer and actor imprisoned by the Nazis for being homosexual. The archive is held at the Schwules Museum, Berlin, where James has spent months sifting through hundreds and thousands of images. 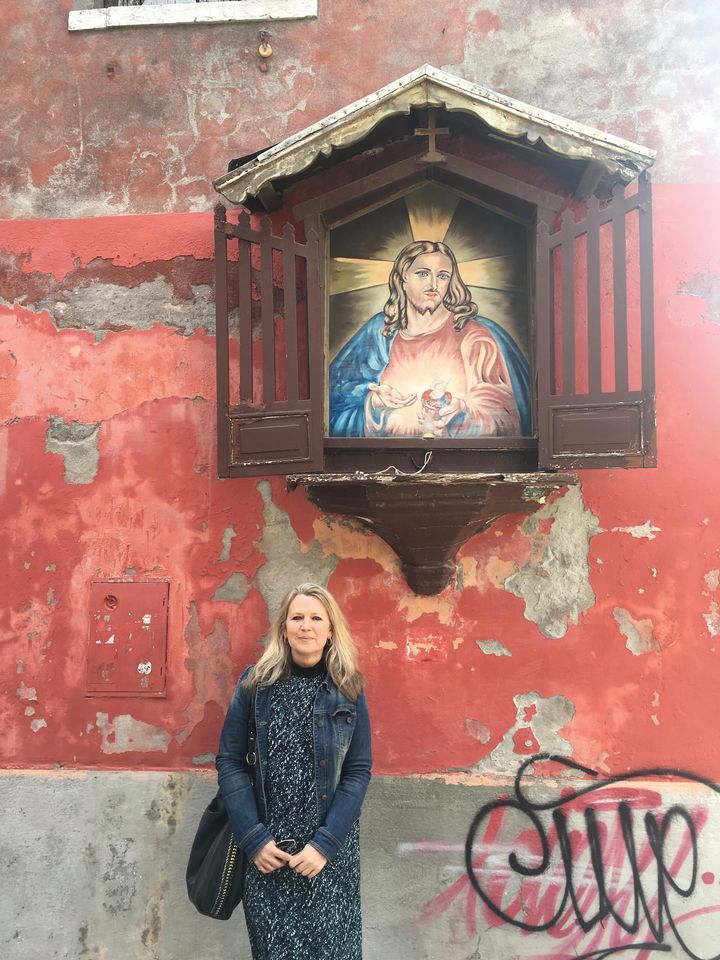 James and Matt have created bespoke furniture for Migratory Motor Complex, the sound installation in the church, and we excitedly await delivery to London. In Wales, the technical team are busy preparing acoustic panels and furniture to seat the audience, and we liaise with ACT Printers in Cardiff on a series of 100 inkjet prints mounted onto aluminium that will form the installation Rushes Minotaur. The series of images is expanded out of two original photographic sources: a close-up of crumbling skin from a medical book and the tarpaulin-shielded façade of a shop. These have then been cut together and rescanned to create a multitude of manipulated combinations that will be mounted onto the wall with shelving that we are busy producing in our studio. We crate and gather all the works, equipment, office ephemera and publicity materials ready for transportation. Having worked in Venice before, we’re aware that many seemingly straightforward things can be difficult to come by in Venice.

The team flies out ahead of James’s arrival. We need to check that the adaptation to the building is running smoothly and that we can begin installation on schedule.

The truck arrives at Tronchetto and is packed onto a boat by a team of Venetian art handlers and ArtWorks Wales. We wait canalside in Castello and are relieved to see it arrive on schedule. The works and equipment are offloaded into the venue. Everything is condition-checked on arrival in case of any damage during transportation. All is well and work can begin.

Dean is busy constructing the acoustic panelling for the video work whilst myself and project manager Catherine Angle set up an office in our apartment—we’re still working on a range of other exhibitions and projects back home in Cardiff, so we have to carry on as normal while in Venice.

James arrives with the remaining works on his laptop. He will complete the audio work in the church as he needs to react to, and interact with, the acoustics of the room. Although it’s a little daunting to think that the work is not yet complete, it’s also really exciting to see how it will unfold on site. Meanwhile, signs and information for the Biennale are being installed across the city every day. It’s just 26 days until the vernissage begins.