Artist Olu Oguibe believes the city caved in to demands from the anti-immigration AfD, which opposes the monument 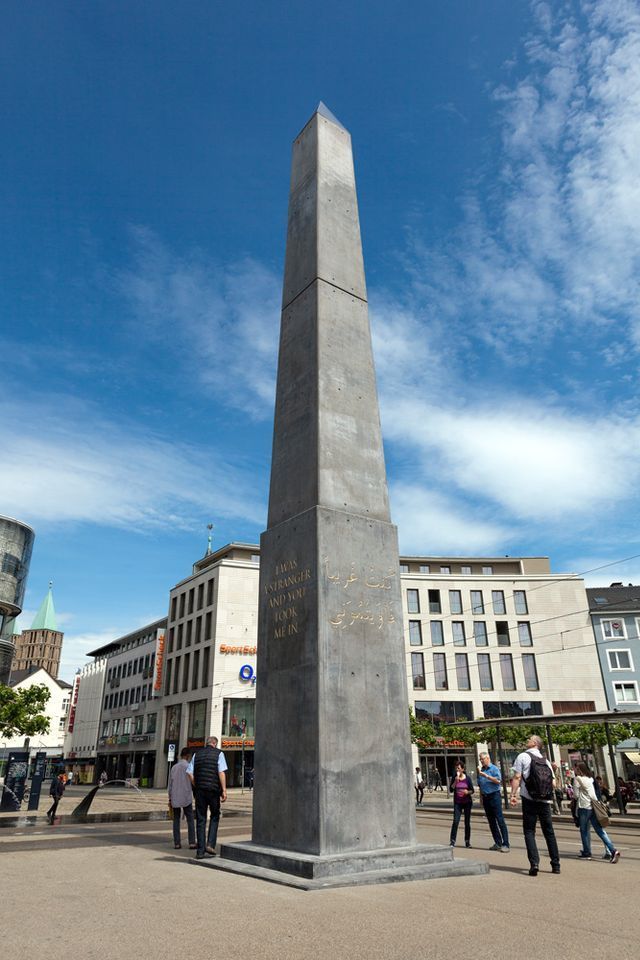 After agreeing to a knock-down price for his obelisk created for last year’s Documenta, the Nigerian artist Olu Oguibe has now locked horns with the city of Kassel over the location of his work.

Oguibe says his Monument to Strangers and Refugees was specifically designed for Königsplatz (King’s Square), where it stood during Documenta, the contemporary art exhibition that takes place in Kassel every five years. This central square in Kassel is where Johann Wolfgang von Goethe was once refused a hotel room because he spoke French to the innkeeper. But city authorities have suggested giving it an alternative home on Holländische Platz, or Dutch Square, which is near the university and frequented by students and immigrants.

“The site and the work go together,” says Alexander Koch of the art gallery KOW in Berlin, who is acting as Oguibe’s spokesman. “Obelisks and kings have something to do with each other. The Dutch and obelisks, not so much.” Koch says the obelisk will be dismantled and potentially sold to another city if Kassel refuses to keep it on Königsplatz.

The city of Kassel and Oguibe launched a fund-raising campaign to buy the obelisk earlier this year, with a target amount of €600,000. They fell well short of that amount, raising just over €76,000 from private donors. An unnamed institutional donor agreed to add a further €50,000. Oguibe has accepted the price.

Koch said the city kept changing its reasons for giving the obelisk a new home, most recently saying it wanted to keep the Königsplatz spot free for future Documenta works.

Oguibe believes that city politicians have caved in to demands from the anti-immigration AfD, which opposes the monument. One AfD city politician described the obelisk as “ideologically polarising, deformed art” last year.

“The artist says he is not willing to go along with this politicisation of his work,” Koch says.

Intended as “a call to action,” the obelisk is inscribed in four languages. It reminds viewers that hospitality can save lives and repudiates the bigotry that leads to refugees being turned away in humanitarian crises.