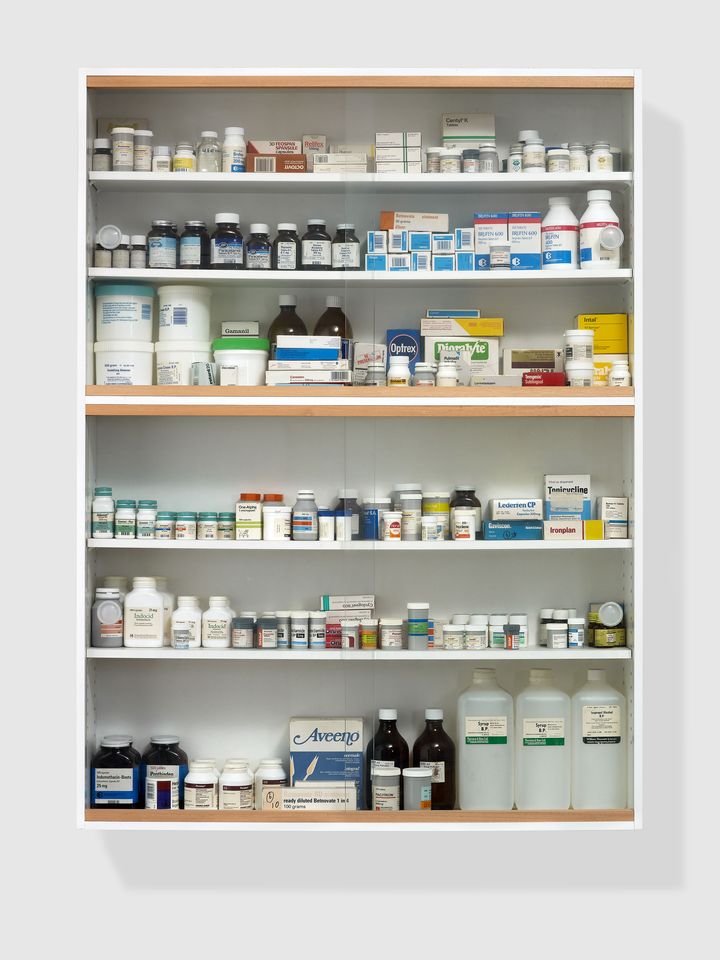 In 1989, when Robert Tibbles bought Damien Hirst’s Bodies, one of the first medicine cabinets the artist created for his degree show at Goldsmiths College that year, little did the bond trader and art collector know that his £600 purchase would become a milestone in the history of contemporary British art.

Back then, Tibbles says, “there wasn’t an enormous slew of people who worked in investment banks and were serious buyers of this sort of art”. His friends were even less complimentary about his collecting. “I lived with that medicine cabinet for seven years with people telling me it was crap, and that I should send it back,” Tibbles says.

For lots of different reasons, he didn’t. “It’s a very clever work—it’s a bit like Duchamp’s Bottle Rack [of 1914]. You’re looking at something incredibly ordinary in a different way,” he says.

The trader bought the piece from the late German dealer Karsten Schubert, who was a close associate of the artist Michael Craig-Martin who taught many of the Young British Artists (YBAs) at Goldsmiths College in London and became known as the godfather of Britart. Through Schubert and, later, the White Cube founder Jay Jopling, Tibbles went on to amass a small, but tightly formed collection of YBA works—“a moment in time”, as he describes it.

The 30-strong collection acquired between 1988 and 2004 is being sold at Phillips in London next month with a total estimate of around £4m. Bodies, which Hirst himself installed in Tibbles’s Pimlico flat, later rehanging it after it fell off the wall, carries a £1.2m-£1.8m estimate and has been guaranteed by a third party.

The cabinet is among six works by Hirst to come to the block with a third-party guarantee—meaning Phillips is not prepared to risk finding buyers in the saleroom on the night. Other Hirst works include a 1994 spot painting (est £900,000-£1.2m), which Tibbles hung above his fireplace for more than two decades, and a spin painting from 1997 (est £270,000-£350,000).

Some pre-sale nerves are to be expected as the YBA auction market has suffered in recent years. Hirst pulled off a coup with his Beautiful Inside My Head Forever auction at Sotheby’s London in September 2008, which netted £111.4m over two days. But the sale unfolded as the financial markets collapsed and prices have since come down to what Hirst himself has described as “the real market”. In 2013, that drop in value was estimated at 60% by Artnet. More recently, auctions of YBA works owned by the advertising mogul and early supporter Charles Saatchi, the gambler and owner of the Museum of Old and New Art in Tasmania, David Walsh, and the late singer George Michael, have produced mixed results.

So why is Tibbles selling now? “I was shown good stuff, and I chose good stuff. The truth is, the valuations have always remained remarkably stable,” he says. Over the years, there have been a number of invitations to sell individual works, but Tibbles never felt the time—or money—was right. “Ultimately, I had this epiphany and realised, actually, [the collection is] complete,” he says.

Cheyenne Westphal, the chairman of Phillips, acknowledges that the “market for YBAs in general has softened”, but adds: “We have some hard evidence that important historic pieces have performed well by Damien Hirst.”

She points to The Void (2000), one of the first pill cabinets Hirst ever made, which sold for $5.3m at Phillips in New York in May 2017, the highest price achieved for the artist in the past three years.

Other lots are keenly priced. Two canvases by Derek Jarman, a knobbly abstract landscape painting of the artist’s garden in Dungeness in Kent from 1994 and a mixed media piece from around the same time, are estimated at £2,500 to £3,500 each. A third work Tibbles that bought from Jarman’s former dealer Richard Salmon incorporating a Sun headline about rent boys at Fortnum & Mason has disintegrated beyond repair and is unsellable.

A favourite with the former Tate director Nicholas Serota, who visited Tibbles’s flat in 1996 to discuss his collection, is Sarah Morris’s Fuck (1996), which was acquired from Jopling along with Girls, executed the same year. Both paintings are estimated at £6,000 to £8,000.