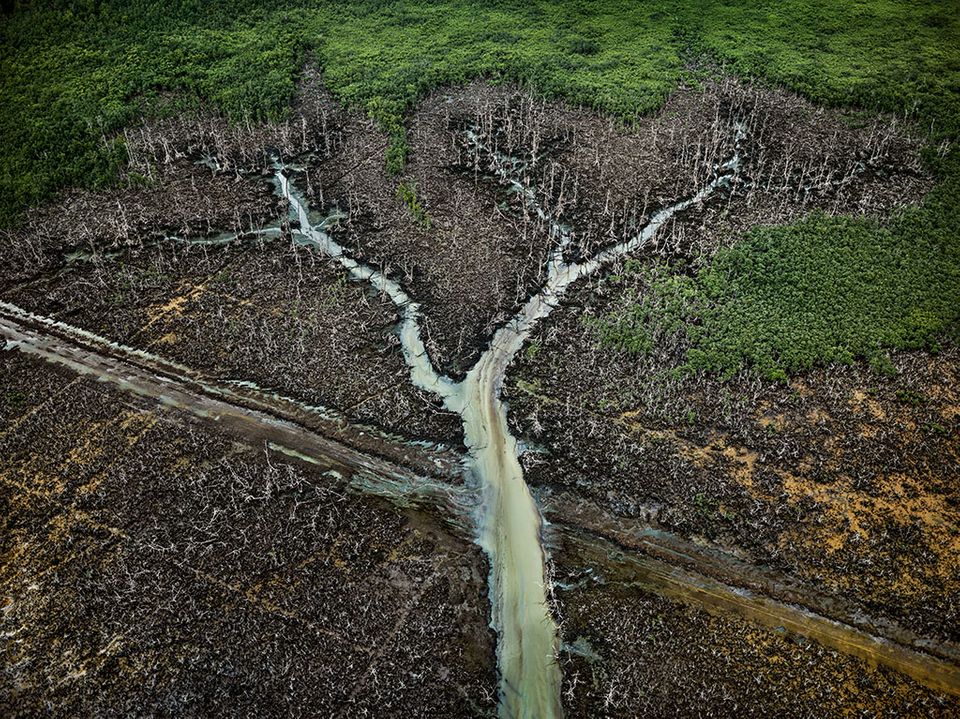 Much like archaeological eras, the Canadian photographer Edward Burtynsky’s projects tend to span long stretches of time. He spent a decade working on his Oil series and five years on the Water project. But, for the past five years, he has been preoccupied by the Anthropocene project, part of which was unveiled for the first time at Photo London art fair yesterday, 16 May (until 20 May).

Most striking among the works is a high resolution mural showing a Carrara marble quarry, a more than six metre-long panorama made by seamlessly stitching together 122 50-megapixel files. The piece literally comes to life using augmented reality (AR)—when you hold an iPad up to the print, the image on the screen pans out to reveal the magnitude of the scene, complete with moving trucks and diggers.

Other photographs show oil bunkers in the Niger Delta, Nigeria; the Morenci Mine in Clifton, Arizona; and a Teck Cominco-owned open pit copper mine on Logan Lake in British Columbia, Canada. Burtynsky's Anthropocene project will culminate in two exhibitions opening simultaneously at the Art Gallery of Ontario and the National Gallery of Canada on 28 September, as well as a book published by Steidl.

Burtynsky has been photographing man’s impact on the earth for far longer than five years, however. He started shooting open pit mines in 1982 and has been “looking at altered landscapes ever since”, he says.

In 1996, Burtynsky started photographing mining sites. He recalls how, one day, he realised the extent of the oil and plastics industry. “I pulled up to a gas station in my car, with its plastic interior, wearing a plastic jacket. I thought, I’m surrounded by this thing called oil. Oil is almost like blood in our veins, it keeps us going. But when we do see it, it’s like blood on the floor.”

The scale of industry became an enduring fascination for Burtynsky–what he describes as the great acceleration. “It was a theme that wasn’t going to dissipate, it was only going to amplify over time,” he says. “When I was born in 1955 there were 2.5 billion people on the planet, now that number is approaching 8 billion. Resources are at risk.”

Terms such as climate change and global warming have been around since the 1970s, but it is only recently that the word Anthropocene (the era of man) has become more widespread. “Around five years ago it became more and more of a subject in the news, but it is the scientific and arts communities that are propagating the term Anthropocene, more than anywhere else,” Burtynsky says. He has been collaborating with the Anthropocene Working Group, an international collective of scientists, to formalise the Anthropocene as a geological epoch.

Despite a consensus that the planet is entering the sixth phase of extinction, Burtynsky holds some hope, for the near future at least. “As we all begin to convert individually, these shifts can happen quickly,” he says. “Look at what’s happening with straws or in Kenya with plastic bags, they banned them overnight. It’s about the cumulative effect.”