The maverick Scandinavian artist duo Elmgreen & Dragset focus on an art world staple—art fairs and their enduring popularity—in their latest show, The Well Fair, which opens at the Ullens Center for Contemporary Art (UCCA) in Beijing on Sunday (24 January-17 April).

The artists have transformed the main hall of UCCA into a fictional fair by building multiple rows of rectangular booths, mimicking the generic architecture of art fairs worldwide.

Works created by Elmgreen & Dragset dating from the past 20 years are dotted around the stands, including The Black and White Diary (2009), a selection of selfie-like snapshots documenting the duo’s professional and personal lives; Modern Moses (2006), an installation featuring a baby abandoned near a cashpoint; and Self Portraits (2015), a series of appropriated works based on other artists’ wall labels. 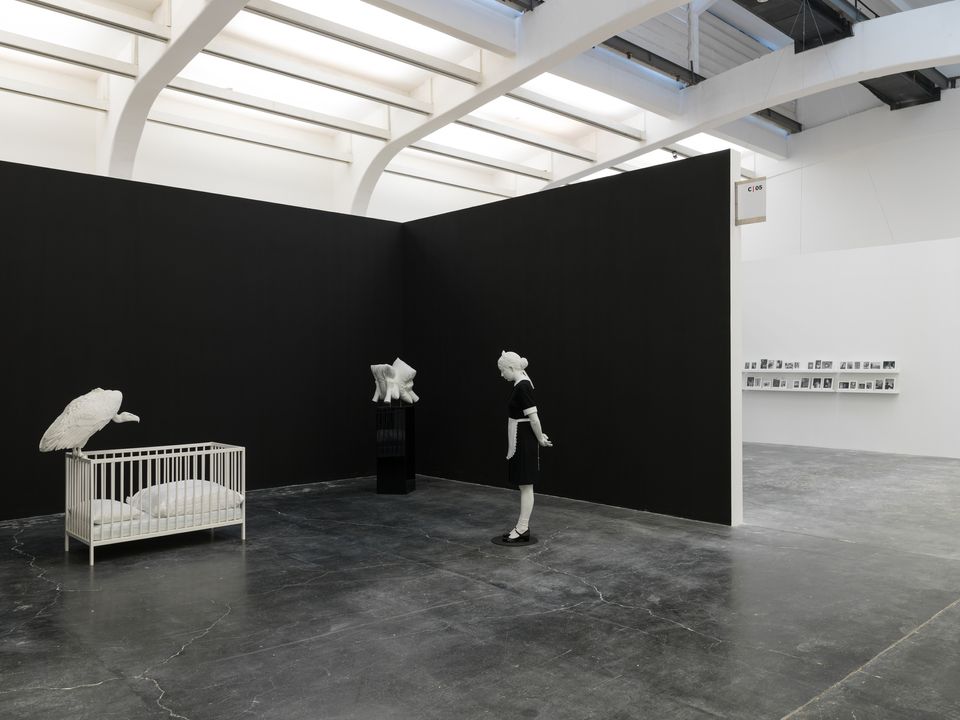 Michael Elmgreen says: “In each booth we have created a narrative, a whole small-scale solo show, so that the exhibition contains multiple solo shows with different concepts and stories.” Two adjacent stands staffed by dealers played by identical twins, showing the same works hung in an identical fashion, are a comment on the generic, conveyor-belt aspect of art fairs. UCCA staff, meanwhile, double up as fair guards and information desk staff.

“Some booths have a more poetic or surreal character, while a booth consisting of a number of urn-shaped, hand-blown glass vases—filled with the actual food pigments that are used to coat HIV pills such as Truvada and Isentress—has a more political and serious message which we find important especially in the local context of Beijing,” Elmgreen says.

Elmgreen says that the exhibition examines how the layout of an art fair influences behavioural patterns. “As artists, we constantly hear critics, galleries and fellow artists complain about fair hysteria,” he says. “But everyone still participates in these events since it is a fact that you reach a much wider audience at a fair than in a gallery show. As artists, we somehow need to accept dealing with this presentation format as a reality. With The Well Fair, we have made the fair fit to our works instead of trying to make our works fit into the fair context: a reversed power relationship.”

The fair’s VIP lounge is inaccessible, reflecting the power play apparent at fairs. “There is not only a difference in the way mega collectors and smaller collectors are treated, but also between blue-chip artists and emerging artists, and between smaller, upcoming galleries that have less attractive spots within the fair and the big players,” Elmgreen says.

Does Elmgreen like art fairs? “They could definitely improve and be developed into something more challenging,” he says. “As it stands, the procedure of the art fair is rather repetitive—like decorating the Christmas tree the same way every year.” The Art Newspaper China is the exhibition’s media partner.