Museum is in discussion with trade union after 'final offer' 1.5% salary increase was deemed too low 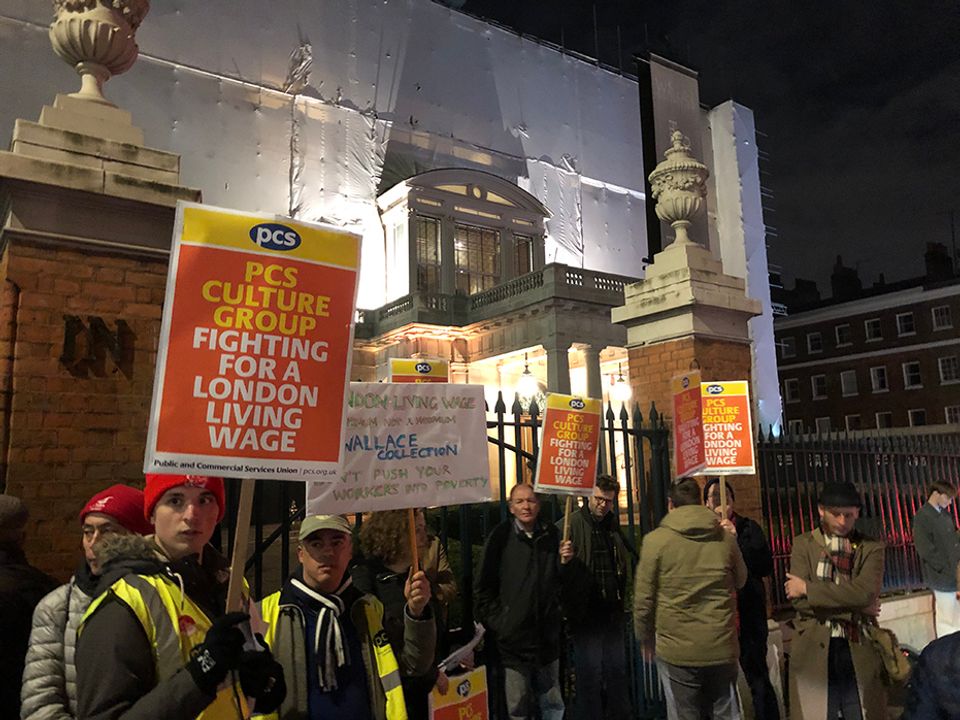 The Wallace Collection in London is involved in a dispute with the Public and Commercial Service Union (PCS) over demands from its staff to be paid the London Living Wage, which is currently set at £10.75 per hour or £19,980 per year.

Following discussions initiated by PCS in May this year with the museum's senior management, the Wallace Collection made a "final offer" in November of a 1.5% pay rise for all staff—an amount described as "derisory" by PCS. This increase leaves current salaries for the museum’s lowest earning full-time workers at 3.9% below the London Living Wage

In response, a group of around 20 protestors gathered outside the Wallace Collection on 3 December, calling for the museum's senior management to “treat its workers fairly” and for its director, Xavier Bray, to “end low pay”. Following a board of trustees meeting that took place the next day, the Wallace Collection released a statement saying: "Discussions with the PCS union are ongoing and we hope to reach a satisfactory resolution for all parties shortly."

One of the UK's largest trade unions, PCS bargains with a number of other major UK public arts institutions including Tate, the Victoria & Albert Museum and National Galleries Scotland.

Last year, PCS entered into a dispute with Tate after the gallery offered pay rises "significantly below the inflation rate", according to PCS officer Steven Warwick. The result was settled before strike action took place, with Tate eventually giving "one of the most generous awards across the [arts] sector".

Warwick adds that he cannot think of any other public arts institution that PCS deal with besides the Wallace Collection that does not pay its directly employed staff a London Living Wage.

This is not the first time that the Wallace Collection has been engaged in a dispute regarding paying its workers a Living Wage, according to a Wallace Collection employee who asked to remain anonymous. Speaking at the protest, he said that in 2015 staff demanded an increase to salaries and after "lengthy" discussions, which took around a year, the museum committed to paying the 2015 London Living Wage.

But since then wages have stagnated, he says, estimating "a 7-8 % loss in income for the lowest band of staff since the beginning of 2017, when adjusting for inflation". Workers on salaries above the London Living Wage, such as members of the curatorial and library departments, are also affected by the Wallace Collection's failure to remunerate in accordance with inflation, he said.

Other grievances addressed by the protesters included claims that the museum has increased the number of zero-hour contracts and has decreased opportunities for full-time staff to work overtime.

Among the key risk priorities outlined in the Wallace Collection's annual report for 2018-19 is "guaranteeing the scholarly quality of the museum’s activities and improving its international position under severe financial constraints".

The museum recorded a slight decrease in visitor attendance, dropping from 463,284 to 421,676, although the 2017-18 figure represented an all-time record for the Wallace Collection. The decrease is also in line with several other national museums, the report states, attributed in part to a fall in overseas visitors to the UK.

The matter is still being discussed among the board of trustees, whose chairman António Horta-Osório, the chief executive of Lloyd's Banking Group, earned a salary of $10.3m in 2016 as reported by the Financial Times. "It is for the trustees to improve the offer", says Warwick, adding that PCS will not back down and “will escalate the dispute as appropriate".

UPDATE: In a statement released 16 December, PCS announced that the Wallace Collection Trustees and senior leadership have made a new offer that guarantees the London Living Wage for the museum's lowest paid staff until at least 2021. A "significantly improved offer" has also been made for all other staff salaries which "meets all of PCS's core demands".

In the same statement Steven Warwick said: “We are pleased that the Wallace Collection and its trustees have taken the moral decision to pay, as a minimum, the London Living Wage. We appreciate the extra burden that this puts on a small employer and so we are committed to campaigning for DCMS and the Government to properly fund our cultural institutions, ensuring that they can meet this important obligation.”