As China faces growing criticism over its detention of Uyghers and crackdown in Hong Kong, Tate, V&A and the Pompidou explain why it is important to continue working in the country 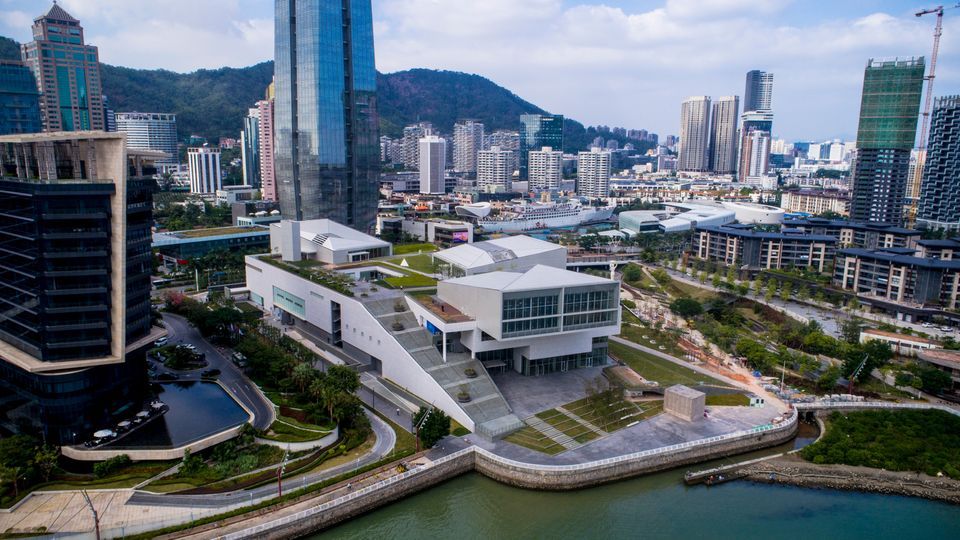 Design Society, the museum project developed by China Merchants Shekou and the V&A in London opened in 2017 Design Society

“The V&A’s history of working in and with China stems back to our earliest years, as a new museum building a collection celebrating the finest examples of art and design from across the world. Today our international strategy focuses on sharing the V&A’s collections, knowledge and expertise with the widest possible audience and is rooted in the belief that cultural exchange—particularly at museum to museum level—can be highly impactful as a means of generating greater understanding between global cultures and communities.

The V&A’s role as a founding partner in establishing Design Society was to help establish a new cultural platform at the heart of a manufacturing and creative megacity, a centre of design innovation where the issues and opportunities of our time are the most acute. Over five years, we offered professional advice and training to multiple departments, supported the creation of a new learning strategy focused on an extensive community engagement programme and developed a long-running display featuring over 250 objects from across our collections in the V&A’s Values of Design gallery. Due to the impact of Covid-19, and temporary closures at both Design Society and the V&A in recent months, the initial contract has not yet concluded—discussions are ongoing about the future of our relationship under any new agreement.

The V&A receives approximately 40% of its income from the UK government. The rest of our operating budget must be drawn from sponsorship, donations, membership and commercial activities. In the current financial environment, we recognise an increased need for financial resilience. Innovations like our partnership with Design Society play an increasingly important part in ensuring the V&A is financially sustainable, contributing to the ongoing preservation of national collections, keeping the V&A free to visitors and helping fund a varied programme of free displays, talks, tours and research.” 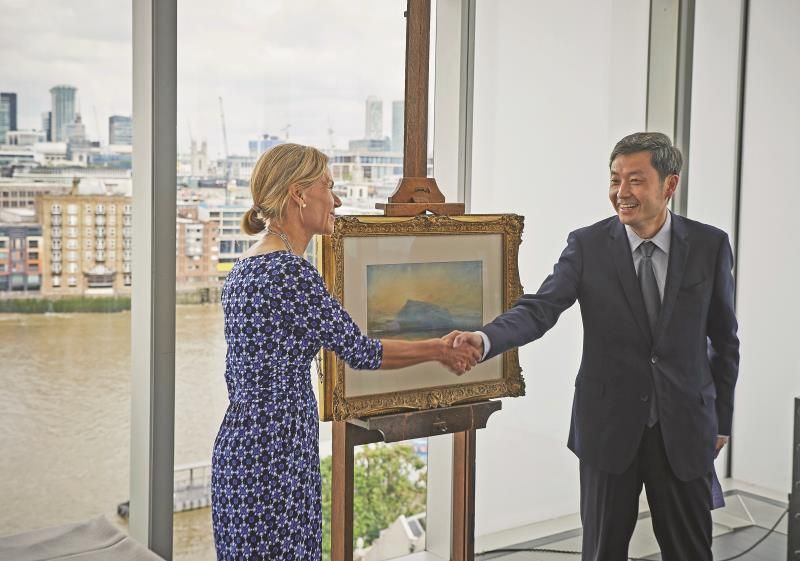 Kerstin Mogull, the managing director of Tate, and Bao Shuyi, the vice general manager of Lujiazui Group signed a Memorandum of Understanding as part of the development of Shanghai’s Pudong Museum of Art in June 2019 Photo courtesy Tate © Ben Fisher

“International cultural exchange is extremely important to Tate and to the UK as a whole. As part of our charitable purpose we aim to bring art to as many people around the world as possible. Sharing Tate’s collection and expertise internationally and promoting British art outside the UK means we can reach audiences worldwide and engage in cultural dialogue in diverse social and political contexts. The art scene in China has grown exponentially in recent years with many international cultural institutions working in the region. Tate has long been engaged with Chinese art and artists, with collegiate exchange between the British and Chinese cultural sectors.

The project with Museum of Art Pudong has been developed over a period of time and is one of many professional relationships Tate holds with museums around the world. It is a collaboration with museum colleagues committed to increasing Chinese people’s access to the possibilities of international art. The project will help Tate reach Chinese audiences and deepen our understanding of the rapidly growing Chinese art world.

As a public institution, we always work with the backing of the UK Government and the approval of our trustees.

We respect the views of artists and work in dialogue with them. We welcome Ai Weiwei’s views, just as we welcome the views of all other artists with whom we work throughout the world. Our collaboration in Shanghai is about people to people relationships with Lujiazui and in the context of the gallery they are creating, sharing expertise and art. In line with the British Council and the Department of Culture, Media and Sport, we believe that cultural relations play a vital role in the world today.” 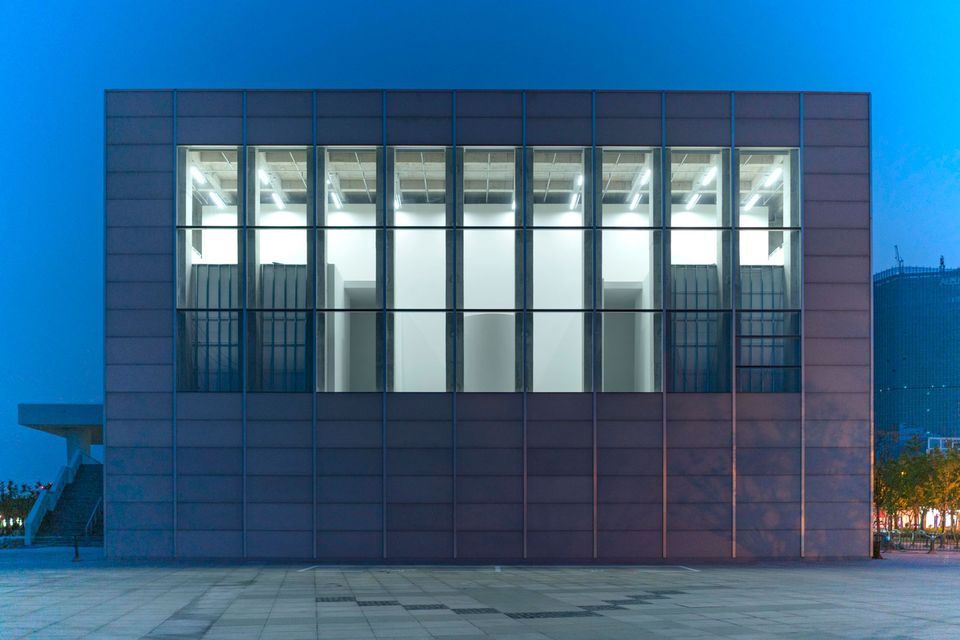 “The Centre Pompidou is an independent public institution. It opened the Centre Pompidou x West Bund Museum Project in China with backing from the French Ministry for European and Foreign Affairs, as well as the French Ministry of Culture. We work in close collaboration with both, and in particular with the French consulate in Shanghai, although we do not intervene in international matters handled by the French government, or the prerogatives of the French Ministry of Foreign Affairs. The ministry has recently given its recommendations on the situation of the Uighur issue and on Human Rights in China and Hong Kong (available on the website www.diplomatie.gouv.fr)

The Centre Pompidou and its staff work independently with their Chinese counterparts to choose works, themes and exhibition setups. In compliance with Chinese law, exhibition content is approved by the authority in charge of cultural affairs. The authorisation and approval process may seem complex but we do currently have sufficient freedom to be able to work with China. Should this cease to be the case, we would rescind our collaboration; it goes without saying that all conditions for the conservation of our works have been met. Our foremost ambition is to be able to show and share the sheer wealth of our collections and to provide our Chinese counterparts with our expertise in running museums and outreach.

Shanghai is developing as a new cultural hub; we are not alone in seeking to move in there. Other museums are gaining a foothold, sometimes surprisingly quickly, as seen with the Shanghai Power Station of Art, the Rockbund Art Museum, the Yuz Museum, the Long Museum and several art galleries and contemporary art fairs being organised.

Being established in Shanghai also provides an opportunity to explore non-Western forms of modernity and to forge ahead with our work for the Centre Pompidou collection which now comprises over 200 works produced by nearly 120 artists of Chinese nationality or born in China, dating from the 1930s to the present and featuring all media and the most established names such as Pan Yuliang, Chen Zhen, Huang Yong Ping, Fan Lijun through to more contemporary talents such as Ma Desheng, Wang Keping, Agence MAD, Liu Jianhua etc.

Getting established in Shanghai does not only stem from a policy of outreach or cultural radiance with a view to Westernisation. The Centre Pompidou international development policy is based on experimentation. This involves drawing up a project with a partner, in this instance in Shanghai with a public–private partner reporting to the Shanghai city council. We do not have a single template, we implement projects over a 5-10-year period, factoring in our partner’s expectations and local specifics which differ greatly in Shanghai compared to Málaga and Brussels. With China, the Centre Pompidou has long fostered exchanges and cooperation initiatives, starting in 1989, when the Centre presented in Paris Chinese artists in the exhibition Les Magiciens de la Terre (1989) and in 2003 it organised the exhibition Alors, la Chine?, the greatest Chinese contemporary art event ever organised in France at the time, not forgetting the more recent Masterpieces from the Centre Pompidou 1906-1977 exhibited in Shanghai in 2016. Our foremost aim is to introduce the Chinese public to modern and contemporary art. They are increasingly open to other western cultures and interested in forms of contemporary creation. Without being accused of naivety, we firmly believe that exchange can elevate and help to foster tolerance and curiosity. The opening of the Centre Pompidou X Westbund Museum has been a success despite the Covid situation.

The exhibition The Shape of Time, which is still running, explains the development of the concept of time through over 100 emblematic works by major artists, the likes of Kandinsky, Mondrian and Duchamp, Miró and Picasso as well as modern artists from Asia like Ding Yi, Zao Wou-Ki, Zhang Huan and Kazuo Shiraga. The dialogue between the thinking and artistic traditions in east and west has been launched. As for the temporary exhibition Observations, about new media, it highlighted some 15 works and artists, including Claude Closky, Dan Graham, Mona Hatoum and Zhang Peili. These video projects explore the concept of “observing and being observed”, suggesting a difference between observation, surveillance and censure, which theme could surely be considered especially sensitive? Ultimately, the question is whether we can best serve democracy by ignoring China or by embracing it, forging links and giving access to western culture, as The Art Newspaper China most certainly does.”