Life-size "bodyforms" are positioned amid ancient grottoes, agoras and sculptures 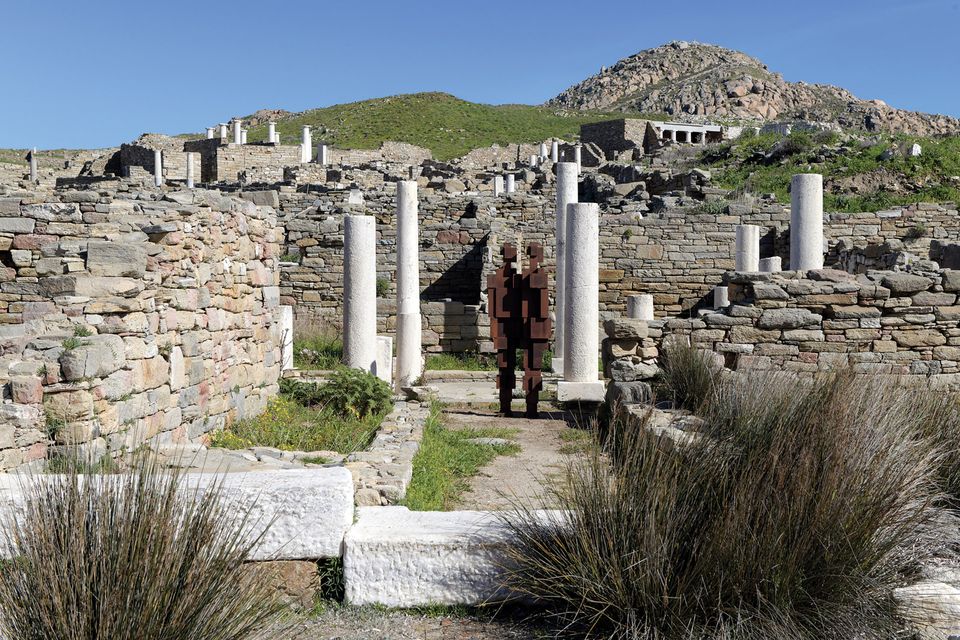 The sculptor Antony Gormley has dispersed 29 of his “bodyforms” around Delos, a Unesco World Heritage site © Panos Kokkinias; courtesy of NEON, the Ephorate of Antiquities of Cyclades and Antony Gormley

As the reputed birthplace of the Olympian twin gods Apollo and Artemis, the island of Delos was one of the most important cult centres of the ancient Greek world, until rerouted Roman trading passages left it almost entirely uninhabited for the past 2,000 years.

In a project running through 31 October, the Turner Prize-winning British sculptor Antony Gormley (born 1950) has repopulated the 1.3 sq. mile island once more by dispersing 29 of his life-sized iron “bodyforms” among its grottoes, theatres, agoras and famous giant phallus sculptures.

The exhibition is “about the human space within space, and what it feels like to inhabit that”, Gormley says.

The works consist of 25 sculptures made over the past two decades and four new, site-specific commissions created since his first visit to the island in August 2018. He may well be the first artist in more than a millennium to make a new work for the site.

“It is an amazing privilege to respond to a place in which the dialogue between geology and humans has gone on for so long,” Gormley says. There are "figurative works that look out to sea, which you see on the approach, but then as you get further inland, they become more abstract”. He describes the archaeological remnants of Delos as “primitive but powerful” and “postmodernism at 300BC”.

Called Sight, the show was commissioned by Neon, the Greek non-profit contemporary art organisation that was founded in 2013 by the entrepreneur Dimitris Daskalopoulos. Its co-curators are Elina Kountouri, Neon’s managing director, and Iwona Blazwick, the director of the Whitechapel Gallery in London.

The project is the first of its kind on the island—a Unesco World Heritage site—to be unanimously approved by the Greek Archaeological Council and the Ephorate of Antiquities of Cyclades. According to Gormley, who spent time studying archaeology at the University of Cambridge, enormous steps have been taken to protect the site in anticipation of an increase in visitor numbers. “We are surrounded by extremely diligent archaeologists,” he says. “Anywhere where there is a junction between my work and original ancient surfaces, we had to put in protective layers.”

But the “shrill winds” invoked by ancient poets were problematic for the artist, delaying the completion of the installation by a month. “We had force-seven gales and waves of up to three or four metres smashing against [a work from the series] Another Time, which we put in the sea to the north of the island,” he says. “The foundations were bent to buggery.”