Expo Chicago opens a week of cross-collaboration in the city 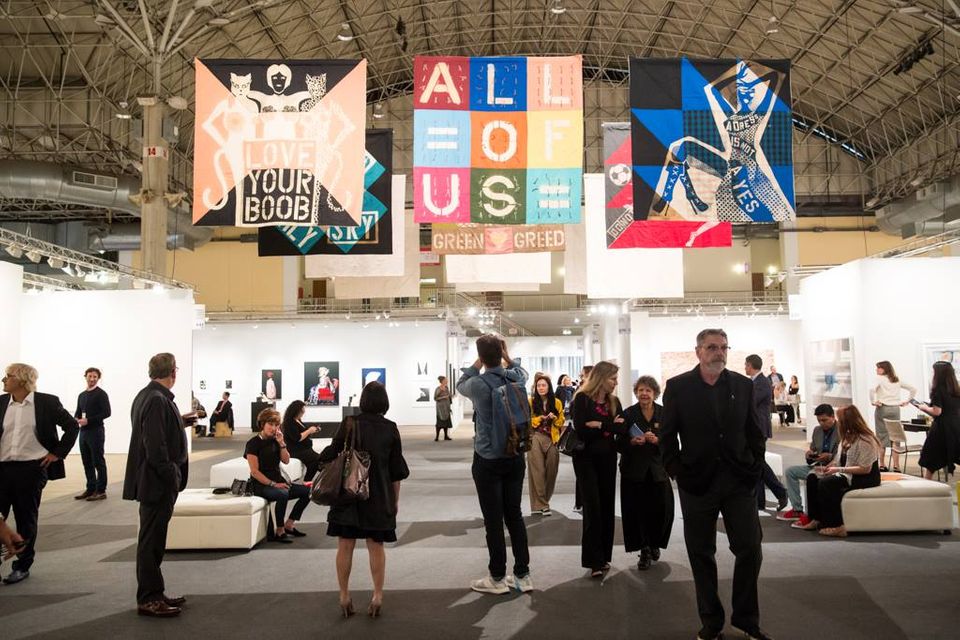 With the architecture biennial opening on the heels of Expo Chicago, and the Terra Foundation’s Art Design Chicago gearing up for 2018 with a presence at the fair, intersectional collaboration seems to be the prevailing spirit of the moment.

Edward Cella Art & Architecture of Los Angeles is showing work at Navy Pier that straddles both disciplines, such as photographer Jennifer Bolande’s billboards that contain an image of the landscape view that they are blocking. This is the gallery’s first time in Chicago and they came because Expo is aligned with the architecture biennial. “It’s the reason we are here,” said gallery director David De Boer.

Another newcomer, Praz-Delavallade, with galleries in Paris and Los Angeles, drew in visitors with the photographer Matthew Brandt’s messy (the artist’s word) yet elegant suite of large silver tree images mounted on aluminum that possess a reflective quality reminiscent of antique mirrors.

Luis De Jesus also of Los Angeles presented Lia Halloran’s arresting large-scale painted cyanotypes of stars and heavenly phenomena. The California artist based this work on glass plate negatives made byfemale astronomers working at the Harvard College Observatory in the 1800s. Facing those pieces are two painted video and mixed media works by the Brooklyn artist Federico Solmi, a vivid political grotesque cartoon offering an intriguing contrast to Halloran’s serene works. The gallery did well with works by Solmi last year so they decided to return.

One of the many standout pieces is Matthew Cusick’s triptych, Waldeninsamkeit, 2016, a lush landscape collage made from pieces of maps inlaid on aluminum,atPavel Zoubok from New York.Genevieve Gaignard’s photographs and collages at the Los Angeles-based Shulamit Nazarian prove that the eternal quest to explore identity is neither divisive or a waste of time. Texas-based artistDeborah Roberts, whose work was recently chosen for a group show at the Studio Museum in Harlem, presents stunning figurative mixed media on paper at Jenkins Johnson Gallery of San Francisco and Brooklyn.

There was no lack of secondary market treasures, notably a small Bill Voila triptych, Poem At, at New York’s James Cohan and Andy Warhol’s Tuna Fish Disaster at Gagosian. The latter gallery’s display, its first outing at Expo, was a standout of hard-hitting works that hint at dark days, including the arresting full-sized guillotine by Piero Golia, Untitled (Evil exists where good men do nothing).

Social practice art shines in the project spaces placed at the edges of the hall, where ideas about food—whether they be issues of waste or insecurity—are the special of the day. The Tea Project by Aaron Hughes and Amber Ginsburg, and hosted by Human Rights Watch, presents daily tea performances in front of a handsome display of porcelain-cast cups drawns from an archive of 780—one for each man detained at Guantanamo. The project is inspired by the Styrofoam cups that detainees would decorate by scratching; guards confiscated all these personalised vessels.

And in The Food Chain Project, the Israeli-Dutch artist Itamar Gilboa sculpted a copy of everything he ate in one year to illustrate the vastness of consumption. Just a fraction of the collection of white plaster pieces were brought to Chicago with the proceeds from sales supporting a food bank.