Bailout fail? Fewer than half of museums in England apply for government’s £1.57bn rescue package 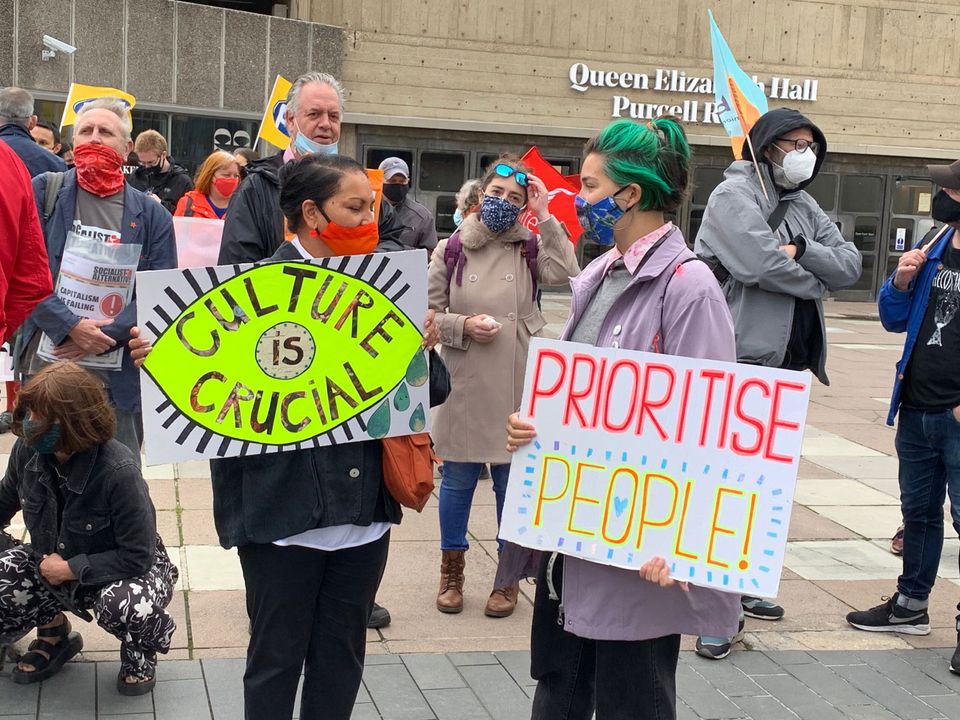 Protesters at the Southbank Centre on Saturday, which is home to the Hayward Gallery and one of the major institutions under scrutiny © G. Harris

According to figures obtained by The Art Newspaper, just 42% of museums based in England have applied for funding from the government’s £1.57bn emergency package for the arts (26 out of 63 organisations responded to our survey).

National museums that are directly funded by the Department for Culture, Media and Sport (DCMS)—such as the Tate, the Victoria & Albert Museum, the National Gallery and the British Museum—cannot apply for the Arts Council England’s (ACE) cultural recovery fund. The ACE fund is made up of £500m in grants and £270m in loans. Applications for the second round of funding close today.

Museums directly funded by the DCMS will instead each receive a portion of a £98m-pot that has been ring fenced by the department as part of the £1.57bn bailout. A DCMS spokesman says: “A number of our arm’s length [DCMS-sponsored] bodies will receive a share of just under £100m in additional grant-in-aid this financial year to help offset the financial impacts of Covid-19.”

The question now is whether further funding will be made available; the £98m must be shared among 17 of the biggest institutions in the UK, with the DCMS topping up grants-in-aid by between 10% and 25%. The Tate is due to receive £7m, while the British Library is understood to have been allocated around £9m.

All of the national museums who responded to our survey say they are currently in discussions with the government about their funding positions ahead of the Comprehensive Spending Review this autumn. A source close to the DCMS says: “The nationals are focusing on the next Spending Review, and putting their lobbying behind-the-scenes into that. It’s too early to say how they will fare.”

A spokeswoman from the V&A says the museum is “continuing to monitor the impact of Covid-19 on the museum’s finances”. She adds: “Ongoing support will be critical for our long-term future, as we expect it will take a number of years to build our business model back up to pre-pandemic levels.”

In a letter to national museums leaked to The Art Newspaper last week, the culture department’s secretary of state Oliver Dowden urged organisations “to take as commercially-minded approach as possible, pursuing every opportunity to maximise alternative sources of income, to fully leverage this investment”.

He adds: “I will not be in a position to make the case for any further financial support for the sector if it becomes apparent that revenue enhancing opportunities were available to your institutions and you did not maximise them.” Dowden highlights potential revenue could come from “exploiting regulatory easements to diversify hospitality and trading activities to monetising digital offers and extending openings”.

Other national portfolio organisations such as the Serpentine Galleries and the Barbican say they have been advised they are not eligible for ACE’s cultural recovery fund. ACE declined to comment on this point, but a spokeswoman for the Serpentine says: “We have been in discussion with the Arts Council who have told us that we are not eligible for the emergency funding, which they have received from the DCMS. We are currently assessing everything in the light of current events.”

The Southbank Centre, which has come under scrutiny for its proposed redundancies, is applying for a loan, which are only available for sums above £3m. A spokeswoman for the organisation says: “We are still finalising our application and considering the most appropriate way to do this given the unique challenges the Southbank Centre faces due to its existing loan commitments.” Before the pandemic, the Southbank took out loans worth an estimated £20m, according to the Public and Commerical Services Union, to help maintain and repair its venues, with the approval of ACE.

Crucially, those who receive ACE funds can use them to cover costs including redundancy pay-outs, which union members have been lobbying for, as well as debts incurred as a direct result of the Covid-19 pandemic. 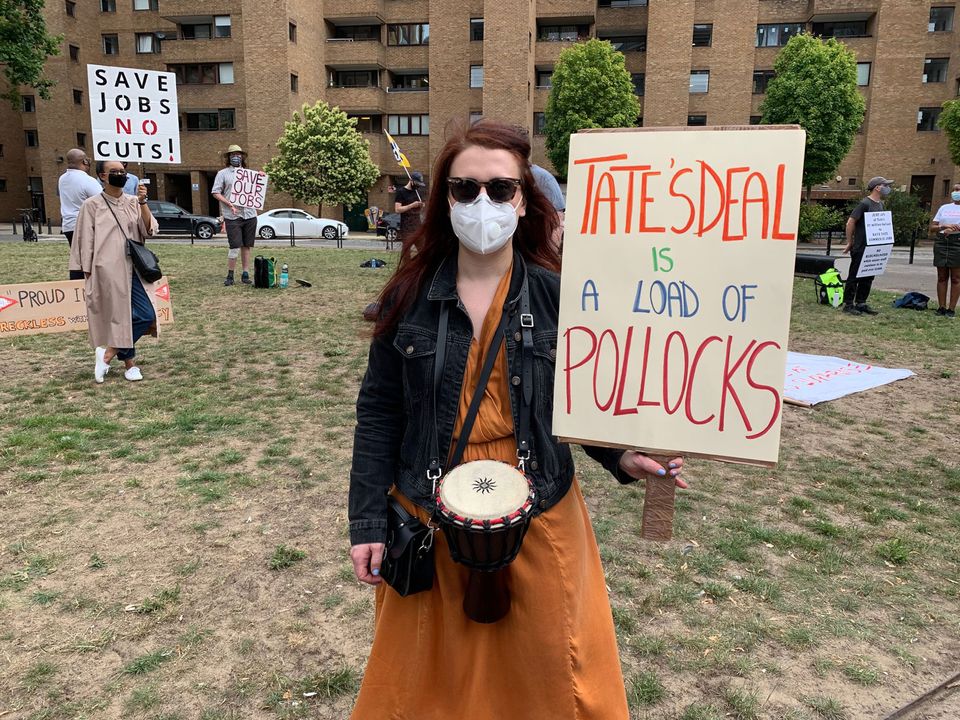 A protester outside Tate Modern in July protesting against jobs cuts © G. Harris

More reports of job losses are beginning to emerge. Among the most high-profile to have announced redundancies are Tate Enterprises, the Tate museums’ commercial arm (313 employees); Southbank Centre (400 employees); and the National Gallery Company, which manages the museum’s shops, café, publications and image licensing (24 employees).

The Art Newspaper also understands that 20%-33% of staff are at risk of losing their jobs at the Royal Households, which includes the Royal Collection Trust. A spokeswoman for the Royal Collection will not confirm or deny the statistic. However, she adds: “While we have taken out a £22m loan to enable us to continue to operate in the near future, we need to do so with a lower cost base to recover our financial position. Inevitably this must include a reduction in staff costs, which is our greatest single expense.”

Two people have been made redundant at the Arnolfini in Bristol and one at the South London Gallery. Voluntary severance schemes are being implemented at the Imperial War Museum, which has not applied for ACE funding, and The Whitworth, which has applied. The Royal Academy of Arts, which has also applied to ACE, is “assessing all options”.

“[The funding is] focused only on the second half of this financial year [...] we call for support from DCMS to be extended if it is to save the future of our struggling sector”

The real test for the sector comes in October when the government’s Coronavirus Job Retention Scheme ends. At the Dulwich Picture Gallery, which has applied for £1.4m via ACE’s cultural recovery fund, 95% of staff are on furlough until 31 October, while the organisation has kept on all of its casual staff through the furlough scheme. A spokeswoman says the gallery has made “fundamental changes to reduce our cost base in order to get through the summer and to prepare for at least two years’ of austerity ahead”. This includes a full staff restructure following a voluntary redundancy process.

Meanwhile, culture and heritage groups in Scotland are due to receive £59m funding which will help support galleries, with £5m set aside to assist “creative freelancers”. The new package “comes as part of the £97m in UK government consequentials for the culture and heritage sectors”, according to a statement from the Scottish state body Creative Scotland. The £97m amount was allocated to Scotland from the £1.57bn fund; Northern Ireland will receive £33m while Wales gets £59m.

Across the UK, the future looks rocky for museums. As Sam Thorne, the director of Nottingham Contemporary says: “While [the government’s] fund is an extremely important intervention, it’s focused only on the second half of this financial year. We need to think and work further ahead. Along with colleagues around the UK, we call for support from DCMS to be extended if it is to save the future of our struggling sector.”

• Still looking to apply for Arts Council England funding? See, Ten tips to get Arts Council funding, according to an expert