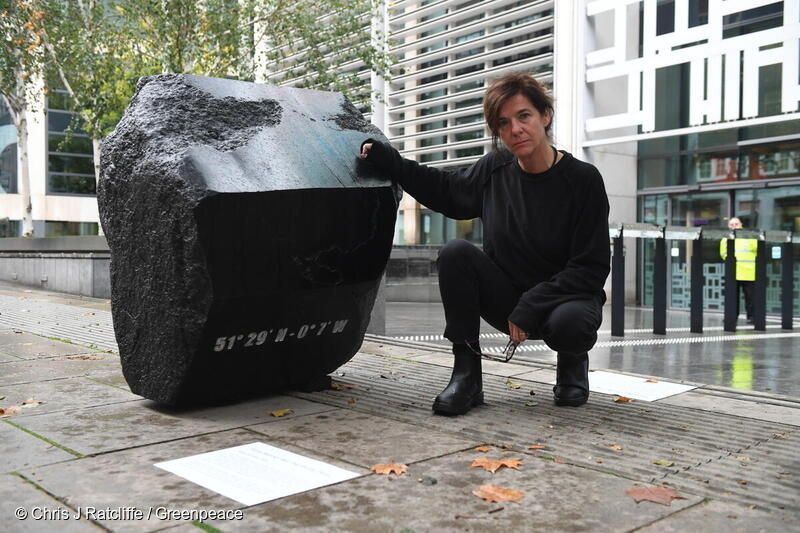 Frieze week got off to an environmentally conscious start when at nine o’clock this morning the artist Fiona Banner and five activists from Greenpeace deposited her 1.5 ton sculpture Full Stop Klang (2020) on the doorstep of the Department for Environment, Food & Rural Affairs (DEFRA), the government ministry responsible for the UK’s fishing policy.

DEFRA Security were informed that Banner and co. were delivering a work to George Eustice, the environment secretary, which was exactly the case. Full Stop Klang is made from granite in the font Klang. It is a calling card and a message for Eustice and his government, calling out their failure to protect our ocean environment from bottom trawling in the seas. “There are Marine Protected Areas (MPA) out there that are not being protected and the ocean bed is being destroyed. Let’s stop turning a blind eye to this,” Banner says.

This direct action is part of a Greenpeace campaign to stop illegal industrial fishing in some of Britain’s most sensitive marine areas. Of particular concern to both Banner and Greenpeace is the widespread illegal fishing activity taking place around the North Sea in the Dogger Bank MPA. Here she says there is “an enormous amount of bottom trawling fishing going on, which is essentially like a bulldozer charging through an ancient forest. The environment and eco-culture is being damaged—and it needs to stop”. 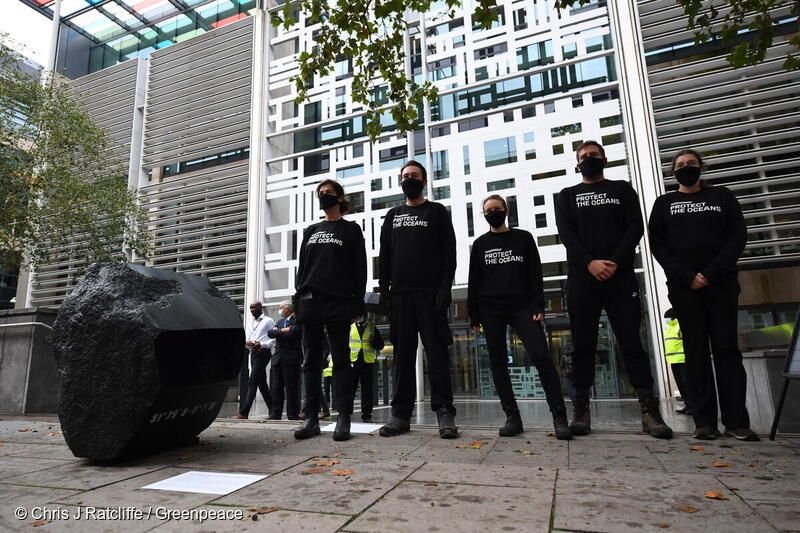 Banner’s heavyweight message to George Eustice is one of a series of three granite full stop sculptures. This afternoon the remaining two, in the fonts Peanuts and Orator, are being loaded onto the Greenpeace ship Esperanza which is moored by Tower Bridge. From here they will be taken to the Dogger Bank MPA and will then be deposited into the water as part of an underwater boulder barrier. This submerged granite wall has been developed by Greenpeace to render an area of almost 50 sq. miles off-limits to destructive bottom trawling. Both Banner and Greenpeace pledge to remove the sculptures and all the boulders if the government makes “a credible commitment to immediately ban industrial fishing from the Dogger Bank and all of the UK’s offshore MPAs".

"When language is used in a duplicitous way and words stop meaning things, then democracy dies" The artist Fiona Banner

Using her sculpture as a means for direct action marks a new departure for Banner. The giant sculptural full stops she has been making for over two decades are usually to be found in museums, galleries and official public spaces. There are five on the plaza overlooking the River Thames outside London's County Hall. But lockdown and the recent political climate have resulted in what she describes as “a shift in currency” with her sculptures, which are now being deployed as agents for change. “My work is politically charged and now I’m charging it in a different way,” she says. “The pandemic has made us more alert to the precariousness of nature at a time when words like 'crisis' and 'emergency' have been repeated to the point of diluting their urgency. This work is a message. It uses big, physical, absurd language to create obstacle and a call to stop, reconsider and act.” Banner adds that she sees the work as an especially appropriate symbol for our post-truth, fake news era. “It’s the most simple gesture I could make. Where do we go when the words that we use cease to be charged in the way that we want them to be?”

The sheer weight of the work means that, despite the police demanding its immediate removal, it is likely that the sculpture will be remaining outside DEFRA for some time. And that’s fine as far as Banner is concerned. “It is an extremely heavy item and it will probably need a crane to move it” she says, adding that “we’re all fed up with the puffed up, slippery rhetoric of the government. I’d be happy if Klang remains as a reminder that when language is used in a duplicitous way and words stop meaning things, then democracy dies”.