It is a valiant and determined curator who can drive through her dream of an exhibition of still-lifes, especially when the works in question are flower paintings. Historically the still-life has had a low place in the hierarchies of fine art, and a form of discrimination by value is reflected in the market even now. The appearance of Working Among Flowers, which accompanied a touring exhibition, Bouquets: French Still-life Painting from Chardin to Matisse, initiated by the Dallas Museum of Art and Virginia Museum of Fine Arts, is something of a curatorial triumph. It brings together some 130 flower paintings, backed by documentary material and portraits (much more material than in the show itself). Illustrated essays by the editors with Audrey Gay-Mazuel, Olivier Meslay and Sylvie Patry precede brief explanatory texts with yet more illustrations for each section of the catalogue. This allows discussion of the market for flower painting, the taste in vases and other containers and the relationship with contemporary poetry.

The book is in two parts: the essay section and the catalogue. The first essay is concerned with the Spaendonck family and the Neo-Dutch tradition of elaborate flower pieces, followed by a compressed account of botanical illustration in the 18th and early 19th centuries – in fact, contrary to the quoted authority here, the Florilegium with its scientific remit is thriving in the present day. The rediscovery of Chardin by the Brothers Goncourt, illustrated by his exquisite arrangement of flowers in a blue-and-white vase (early 1760s) from Edinburgh, leads the way to the Modern Floral Still Life. A useful summary of the market for Impressionist flower paintings follows. Identifying the ceramic containers points the way to wider cultural interpretations, and will make readers wish that this had been extended to include the catalogue entries. The final essay takes the coverage from floral painting as a response to changes in science, culture and industry into the realms of poetry and, by extension, to the suggestion of floral codes in the paintings themselves. 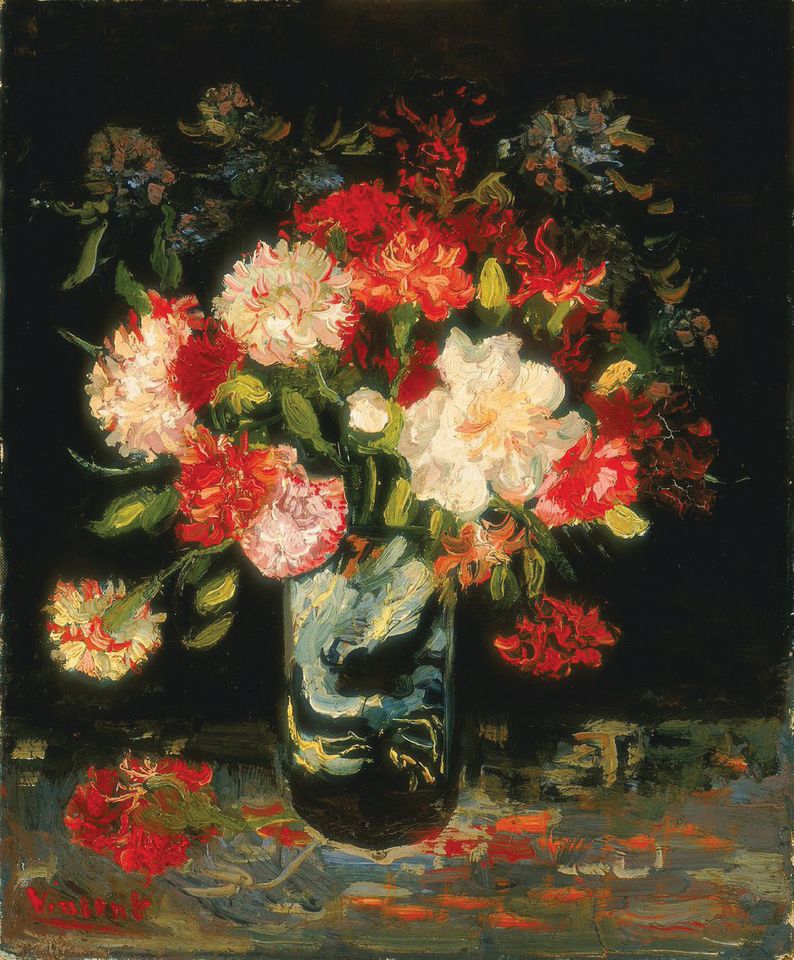 The catalogue section opens with Chardin, Anne Vallayer-Coster and Redouté (a rare oil painting) and their contemporaries. The second section deals with the Lyonnais “fleuristes”, whose flower imagery fed the requirements of the local silk industry. Flower painting in France flourished in connection within Lyons’s traditions of luxury manufacturing, tapestry and silk weaving, wallpaper design, porcelain decoration and, from the mid 19th century, “old” rose pépinières or market nurseries. But the type of floral art encouraged by these associations—clarity, finish and verisimilitude—had reached the lim it of its artistic development and the moment for a new direction had arrived. Vividly colourful flower arrangements by Eugène Delacroix capture the excitement of newly available cultivars and exotics from the East in the 1830s. Delacroix and Courbet smashed through the enamelled perfection of the Dutch flower-painting style without sacrificing the botanical character of the flowers. Their massed bouquets look strikingly modern beside the earlier works, even before the Impressionists had forged a newly expressive language for floral art. Frédéric Bazille, a passionate gardener who retained a crispness and precision in his flower portraits, has a beautiful African woman filling the vase to emphasise the exoticism of his 1870 flower bouquet. Fantin-Latour, Manet, Van Gogh, Odilon Redon and Matisse are represented in strength.

However far these flower paintings go in Impressionistic or Post-Impressionistic technique, the characteristics of the flowers and their identity are never entirely obscured. The book offers a parade of beautiful (if somewhat over-familiar) works that, notwithstanding the lengthy bibliography, belong to a genre taken less seriously than it should be.

• Charlotte Gere is a writer, exhibition curator and 19th-century decorative arts specialist, with many publications on jewellery, design and historic interiors