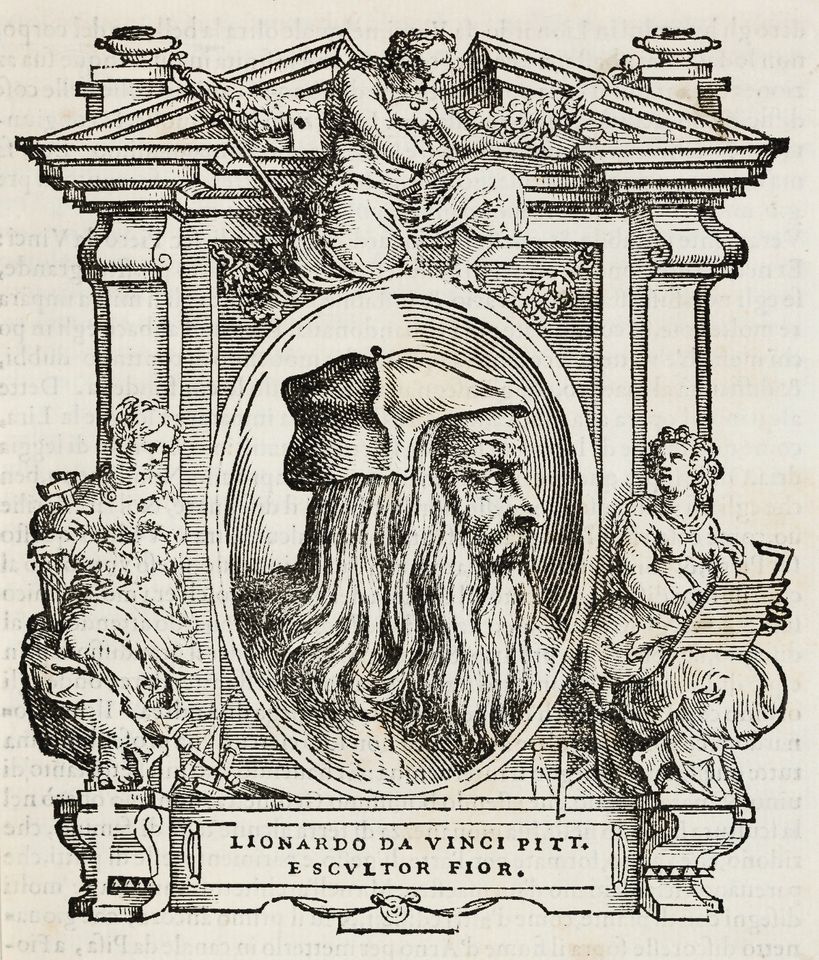 Frontispiece to Giorgio Vasari’s Life of Leonardo da Vinci, from a 1791 edition of Vasari’s Lives © Royal Academy of Arts

The highly anticipated Leonardo da Vinci exhibition marking the 500th anniversary of the artist’s death opens at the Musée du Louvre in Paris this month. Although the media has focused primarily on whether the Salvator Mundi will be included in the display, the real substance of the show is the exhaustive research into Italian literary sources conducted by Louis Frank, a curator in the prints and drawings department and a philologist, which has shed new light on the artist’s life. Contrary to the mythology that surrounds the artist, suggesting that he was easily distracted and moved frequently from one preoccupation to another, the curators argue that all of Leonardo’s endeavours in multiple fields were ultimately undertaken in the service of painting.

Frank, who has organised the exhibition with Vincent Delieuvin from the museum’s paintings department, has spent over a decade examining texts such as The Lives of the Most Excellent Painters, Sculptors, and Architects, written by the 16th-century artist Giorgio Vasari and one of the ideological foundations of Italian Renaissance art history. To coincide with the show, a new version of Vasari’s Life of Leonardo da Vinci is being published by the Louvre and the art publisher Hazan, featuring the original Italian texts alongside Frank’s translations.

A painter at the Medici court, Vasari wrote biographies of the greatest artists of his time, encompassing the likes of Donatello and Michelangelo. Born in 1511, eight years before Leonardo’s death in France, he never met the celebrated artist but was able to reconstruct most of his life through direct and indirect testimonies.

Frank praises Vasari’s understanding of Leonardo’s spirit but says that he took none of his assertions for granted and assiduously cross-checked the writer’s statements about the artist’s life and work against other documents. He urges caution when we read the many subsequent accounts of Leonardo’s life.

“Over the centuries, art historians have accepted as irrevocable truth edited texts that have sometimes been changed by publishers. These mistakes led to distortions which have contributed to the myths surrounding Leonardo,” Frank says. “We had to go back to the source material.” For example, as early as 1759, in one of Vasari’s passages, the word medaglie was changed into modegli: Vasari’s reference to “medallions”, or sculptural reliefs, which were made in Leonardo’s workshop to study draperies, was thus erroneously understood as “models”(three-dimensional figurines). This has subsequently caused confusion over Leonardo’s studio practice. Leonardo himself praised the art of relief, which he saw as closer to drawing and painting and above sculpture, which he deemed a “mechanical art”. A section of the exhibition, with large-scale reconstructions of medaglie, is devoted to this approach.

The complete revision of literature on Leonardo “allowed us to revamp the chronology of his paintings” and even correct his birth date, by one day, Delieuvin says. For both curators (contrary to the late specialist Carlo Pedretti, for example), there is no doubt that the faces of the Mona Lisa and of St Anne in The Virgin and Child with St Anne, both in the Louvre collection, were painted as early as October 1503, when they were seen in the artist’s studio by Agostino Vespucci, a Florentine chancellery official and Machiavelli’s assistant, although the artist continued to work on both paintings until 1519. Examinations at the French museums’ research laboratory supported these findings.

Both curators intend to dispel the image of Leonardo as a dilettante unable to finish his paintings because he was easily distracted. Vasari himself contributed to this misconception by stating that the artist worked on the Mona Lisa for four years before leaving it unfinished (“imperfetto”). But Vasari never saw the painting, which was in the French royal collection. He nevertheless regarded it as one of the pinnacles of artistic achievement alongside Michelangelo’s Last Judgement in the Sistine Chapel and Brunelleschi’s dome of Florence cathedral.

Vespucci also indicated—in a note written in the margin of an edition of a text by the Roman orator Cicero—that the sitter was “Lisa del Giocondo”, an identity that is generally accepted today, the curators say. The note was discovered by chance in 2005 by the researcher Armin Schlechter in Heidelberg University Library, where the Cicero text is housed.

Pointedly, Delieuvin argues that the portrait has “lost the magnificent lapis lazuli blue of the sky”, as it is covered with yellow varnish that “will inevitably darken more with the time”, implicitly suggesting that this celebrated painting should be restored.

The curators believe that Leonardo saw painting as his top priority, contradicting a popular belief that he gave it up for years to focus on engineering and mathematical, medical and botanical studies. In fact, Leonardo’s first biographer, the humanist Paolo Giovio, wrote that Leonardo considered these disciplines as “necessario picturae famulantes”, the useful servants of painting. For Leonardo, the curators say, such research was a contribution to his painting, which he considered the most divine of all the arts, placed even above science; it was the only discipline capable of recreating life in all its complexity.

The new edition of Vasari’s Lives includes both complete editions of Vasari’s Life of Leonardo da Vinci (1550 and 1568) and passages drawn from Leonardo’s own writings as well as other texts such as Giovio’s biography of the artist. Helped by specialists, Frank has also penned chapters on mathematical and medical disputes of the time, as well as detailed historical accounts of events like the Battle of Anghiari, which Leonardo commemorated for the republic of Florence in a painting that is now lost.