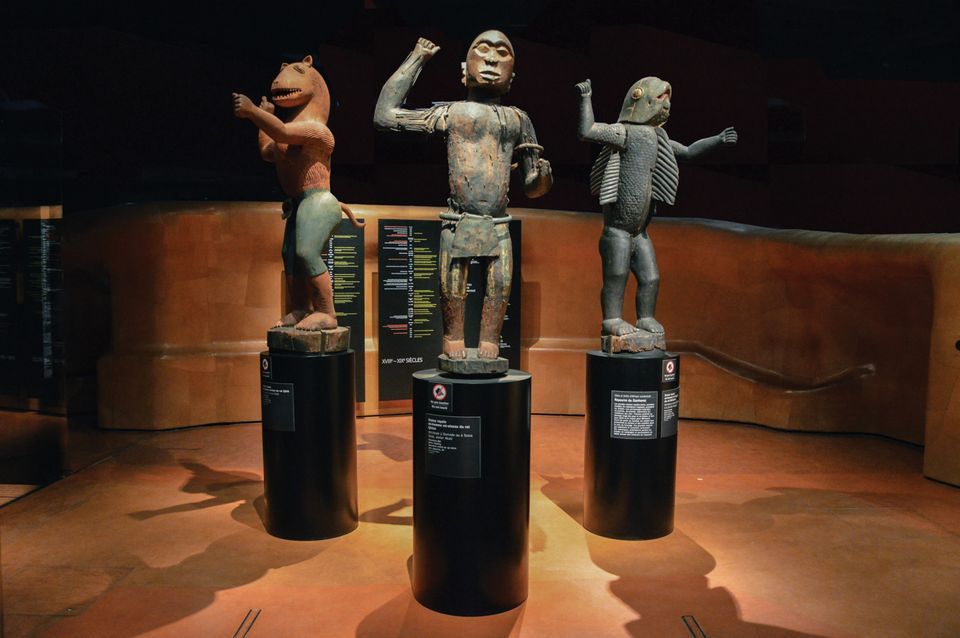 The bill would compel France to return these Benin statues from the Quai Branly museum in Paris, among 26 objects plundered by French troops from the royal palaces of Abomey in 1892 Photo: Shonagon

France’s National Assembly voted on Tuesday evening to pass a bill returning 27 colonial-era artefacts from French museums to Benin and Senegal. The vote comes almost three years after President Emmanuel Macron pledged in a speech in Burkina Faso to enable “the temporary or definitive restitution of African heritage to Africa” within five years.

If enacted, the bill would compel France to return 26 works looted from Benin’s royal palace of Abomey that are in the collection of the Musée du Quai Branly-Jacques Chirac in Paris. A sword that belonged to the west African military leader Omar Saidou Tall would return permanently to Senegal from France’s Musée de l’Armée. The sword is currently on loan to the Musée des Civilisations Noires in Dakar.

The French government launched an “accelerated procedure” in July so parliament would vote upon the bill quickly. Forty-nine deputies approved the draft law on its first reading in the lower house, with none against; six abstained. It will now pass to a vote in the Senate. If it is adopted by senators and signed into law, the works will be returned within one year.

If the Senate does not approve the bill, either a small number of deputies and senators would meet to reach an agreement on contentious points, or a second reading of the bill would be passed to the National Assembly and then the Senate.

The bill was presented by the former culture minister Franck Riester, now responsible for foreign trade, as the current culture minister Roselyne Bachelot is self-isolating after coming into contact with someone who tested positive for Covid-19. Riester told the National Assembly that the bill represented “the long and meaningful work that had been engaged” since Macron’s 2017 speech in Burkina Faso. It embodies “a new ambition for [France’s] cultural relationship with the African continent”, he said, that is not about “repentance or reparation” but is “based on new forms of co-operation and the circulation of works”.

However, for the president of Benin, Patrice Talon, the bill does not go far enough. He told the weekly publication Jeune Afrique that he was “not satisfied” although he recognised “small steps” on behalf of France. Benin is seeking “a general law” for the restitution of cultural artefacts rather than the “strict minimum” of the present bill specifying 26 objects, Talon said.

Although “there is a consensus” to restitute African objects through this bill, the legislation is “very specific” and not a major departure for France, says Marie Cornu, a specialist in cultural heritage law at France’s National Centre of Scientific Research, the CNRS.

France has passed similar individual laws to repatriate human remains held in museums, most recently the skulls of 24 Algerian anti-colonial fighters from the Musée de l’Homme in Paris. New laws are needed each time because of a 16th-century legal principle in France, which considers objects in public museum collections “inalienable” parts of national heritage.

“It is not impossible that other restitution demands from other states will be made and that there will be other legislative processes,” Cornu tells The Art Newspaper. A wider legal framework could be considered, she says, “to facilitate matters so that parliament would not have to vote and adopt a bill on each restitution one at a time”.