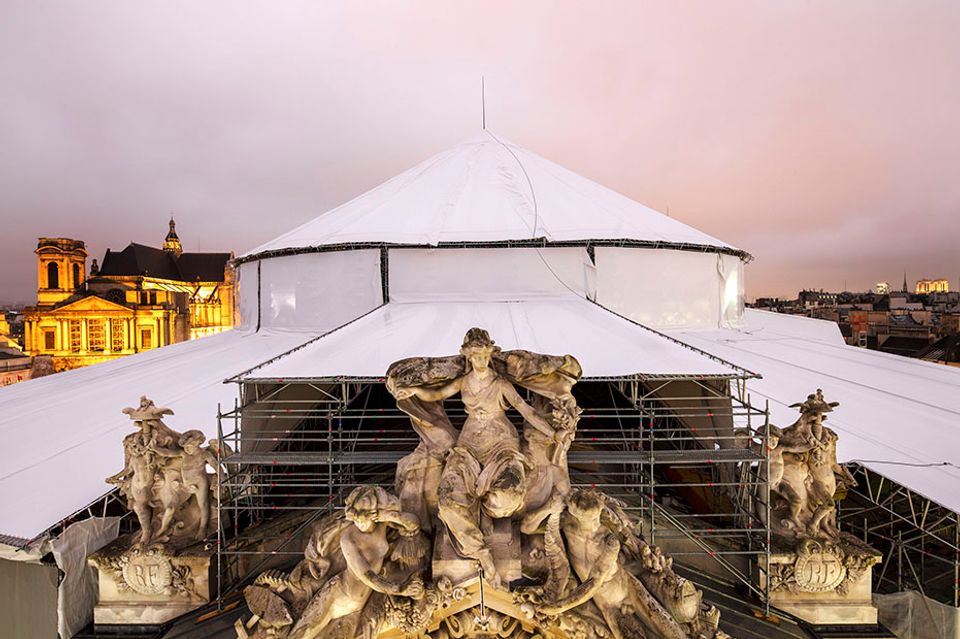 Visitors to the Palazzo Grassi in Venice during the preview of the Venice Biennale last week took a virtual reality (VR) tour of the billionaire collector François Pinault’s ambitious new Paris gallery, which is due to open next March. The new contemporary art museum, housed at the historic Bourse de Commerce (stock exchange) building near the Louvre, has been transformed by Tadao Ando, the Japanese architect who designed Pinault’s two Venetian galleries (Palazzo Grassi and Punta della Dogana).

The VR preview—which was part of a special exhibition at the Teatrino Palazzo Grassi (until 12 May)—revealed that Ando has installed a nine-metre high concrete cylinder in the main rotunda, which encircles the central exhibition space on the ground floor.

Visitors can access a walkway on the first floor around the top of the cylindrical structure, which leads to another gallery and workshop area. Seven galleries in total will occupy sections of the building (the total exhibition area is 2,700 sq. m). Martin Bethenod, the managing director of the Bourse de Commerce, says the exhibition programme has yet to be announced. The cost of the refurbishment is undisclosed.

The sweeping circular painting covering the building dome, spanning 360 degrees, has also been restored as part of the project. “This famous panorama [made in 1889] depicts trade in the late-19th century, across the five continents,” says Alix Laveau, the conservator of the Direction des Musées de France, who supervised the conservation project.

The panorama is the work of five artists, including Évariste-Vital Luminais, who was assigned America, and Désiré-François Laugée, who depicted Russia. “From the walkway created at the top of Ando’s central cylinder, visitors will be closer to the panorama than their 19th-century forerunners had been,” Laveau says.

Pinault commissioned an extensive historical and architectural study of the Bourse de Commerce, which was erected by Nicolas Le Camus de Mézières in the 18th century to store corn and flour before being remodelled in the 1880s as a stock exchange. The building’s cast-iron cupola, or dome, was designed in 1813 by the architects François-Joseph Bélanger and Jacques Ignace Hittorff.

Ando has led the building’s renovation alongside the French architects Lucie Niney and Thibault Marca. They are working with Pierre-Antoine Gatier, the chief architect of France’s historic monuments.

In an online statement, Gatier said: “The conversion of the Bourse de Commerce into a museum involves two main aspects: the restoration of the site to its condition of 1889 [when it became the Bourse], and an adaptation to its modern use. The entirety of the Bourse will be renovated— from the external and internal façades, to the roof and the frescoes of the cupola.”

Gatier subsequently discovered an archive of drawings by Hittorff in the Wallraf-Richartz Museum in Cologne, Germany, which includes sketches linked to the construction of the cupola of the Halle au Blé (corn exchange). Pinault helped to fund the restoration of more than 200 of these architectural sketches.