‘From bad to worse’: over half of US museums have laid off or furloughed staff, survey shows

Museums expect to lose an average of 35% of budgeted income this year, plus an additional 28% in 2021 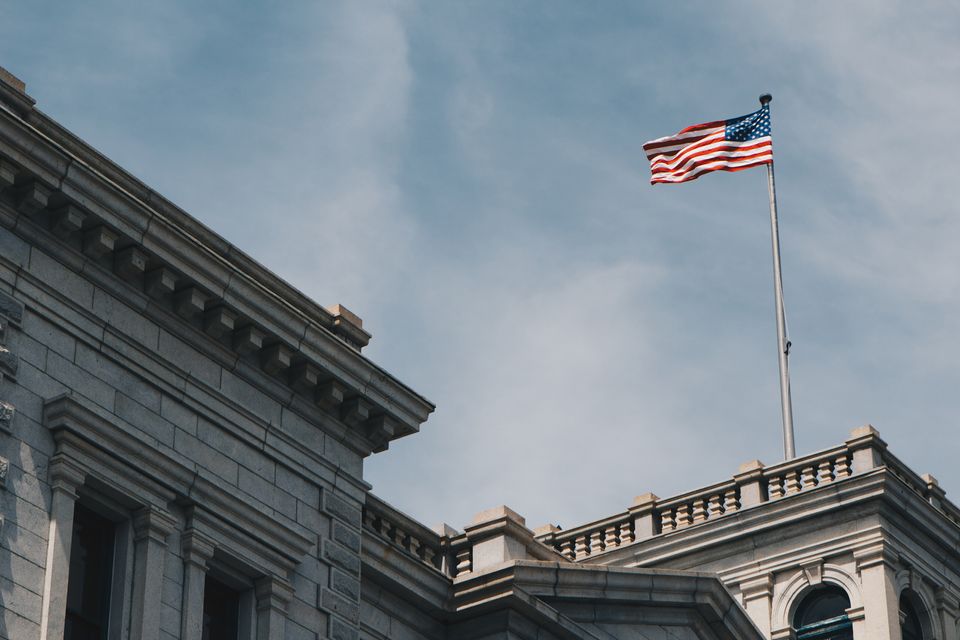 According to a new survey, more than half of US museums have laid off or furloughed staff during the pandemic © Hayes Potter

The American Alliance of Museums (AAM) today released the results of a survey indicating that 53% of US museums have laid off or furloughed staff since the coronavirus pandemic arrived this year. On average museums anticipated losing 35% of budgeted income by the end of 2020, plus an additional 28% of normal operating income in 2021.

On average, respondents indicated 28% of their staffs are currently furloughed or laid off. The positions most often listed as being affected were guest services, admissions and retail (68% affected), education (40%), facilities, maintenance and security (29%) and curatorial, collections and publications (26%).

The study, conducted with the Seattle firm Wilkening Consulting from 15 to 28 October, surveyed 850 museum directors about their institutions. A total of 29% confirmed that there was a “significant risk” (12%) of closing by the fall of 2021 or that they “didn’t know” (17%) whether they would survive. Respondents have lost an average of $850,000 each on average due to the pandemic this year. 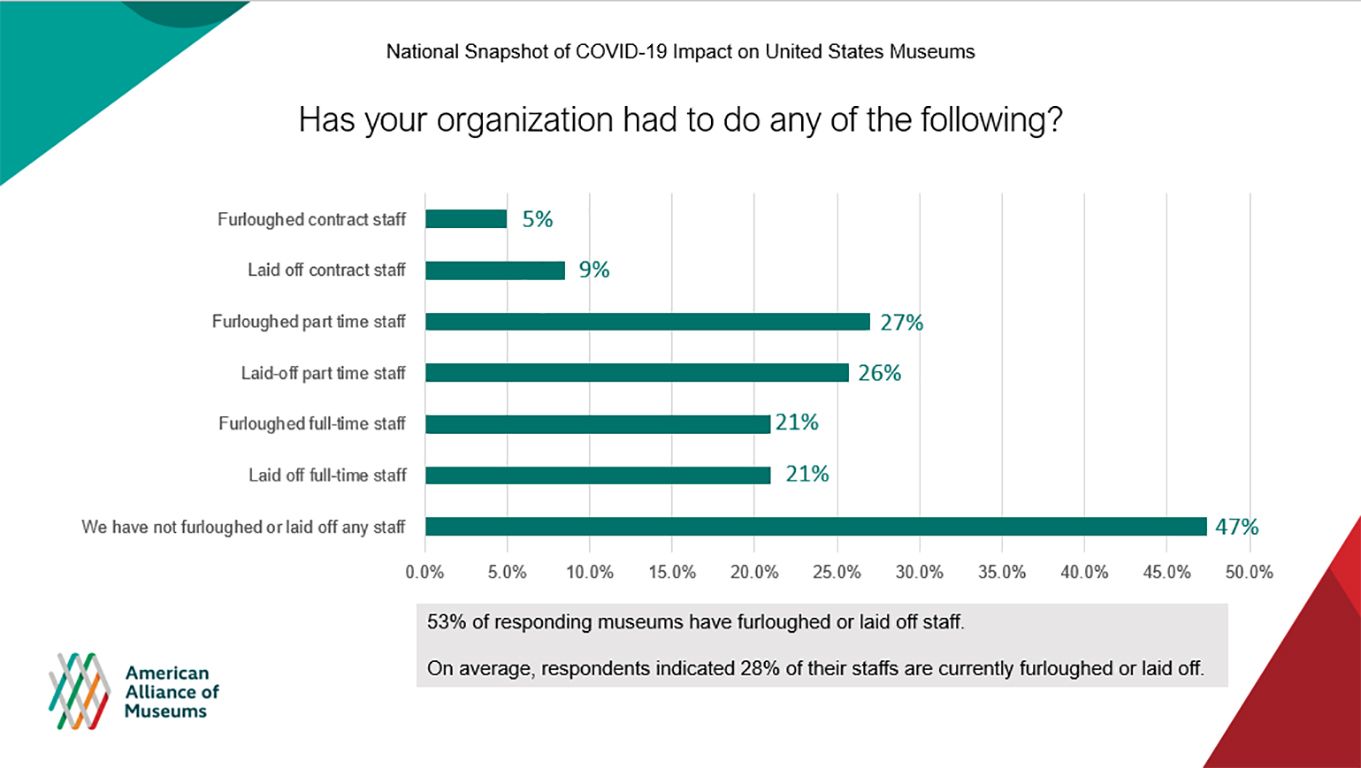 On average, US museums reported in a survey that 28% of their staffs are currently furloughed or laid off American Alliance of Museums

Asked how many months of operating reserves they had remaining, 52% replied six months or less, 30% said seven to 12 months and 18% reported 13 months or more.

“The financial state of US museums is moving from bad to worse,” Laura Lott, president and chief executive of the AAM, said in a statement. “30% of museums remain closed since the March lockdown and those that have reopened are operating on an average of 35% of their regular attendance–a reduction that is unsustainable long-term.”

“Those that did safely serve their communities this summer do not have enough revenue to offset higher costs, especially during a potential winter lockdown,” she adds. “Without financial help, we could see thousands of museums shutter forever.” 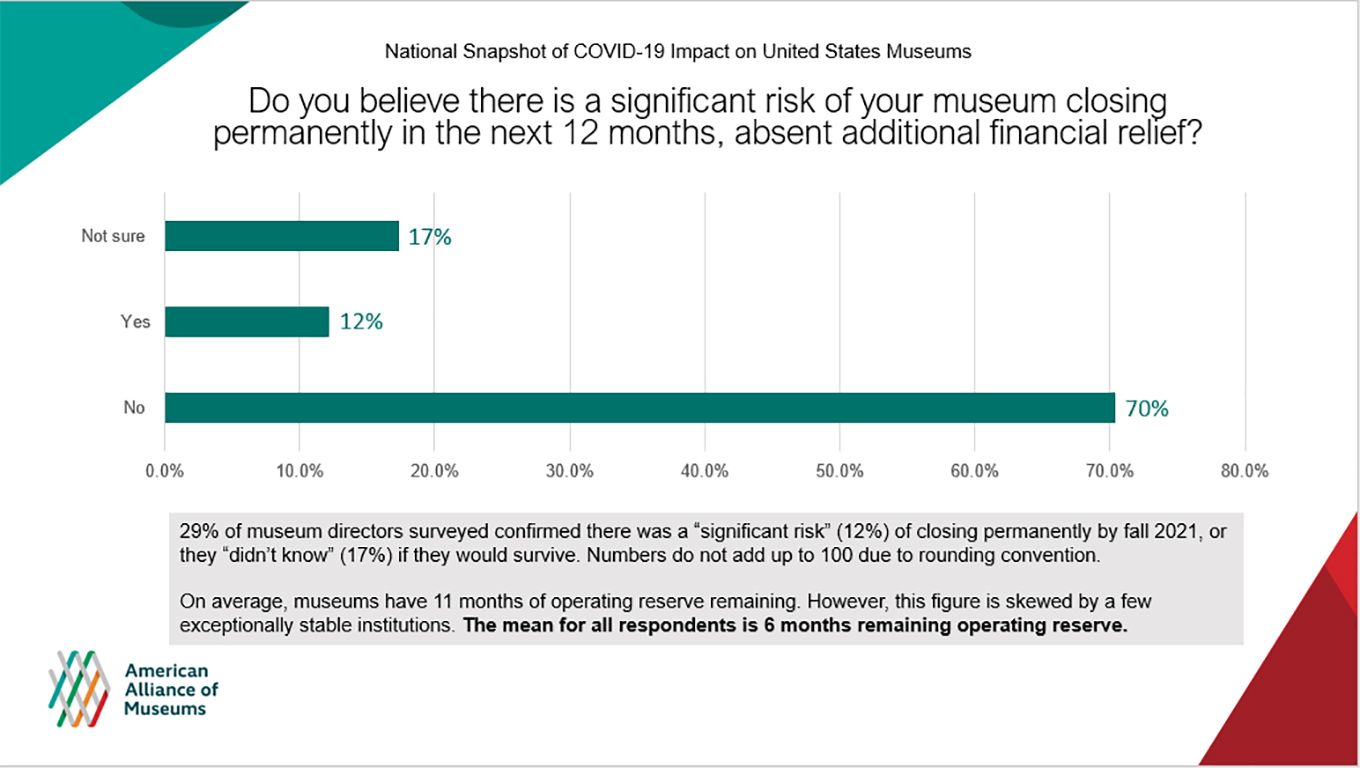 A total of 29% of museum directors surveyed said that there was either a "significant risk" of closing permanently or they "didn't know" whether they would survive. American Alliance of Museums

Of the institutions surveyed, 30% were history museums or historical societies, 22% were art museums, 11% were historic houses or historic sites and 11% described themselves as falling out of the listed categories. Others were science or technology museums, “general” museums, children’s museums, “specialised” museums and natural history or anthropology institutions.

Of the museums surveyed, 71% are currently open, mostly after a hiatus starting in mid-March, and 29% remain closed. To prepare for reopenings, which have been staggered across the country, each museum spent on average $27,000, but for some respondents the figure was as high as $750,000.

Museums that are open are recording 35% of normal attendance on average, due only in part to restrictions on capacity imposed by governments to limit contagion. Some 38% of respondents reported noting demographic changes among their visitors upon reopening, primarily with shifts towards local residents and younger visitors.

A total of 67% said they had had to cut back on education, programming and other public service due to budget shortfalls or staff reductions.

Of the directors surveyed, 67% also said they had replaced their usual in-person fundraising events or galas this year with a digital event. But on average, virtual events fell short of their original revenue goal for in-person events by 34%.

The AAM points out that museums are vital economic engines: prior to the pandemic, it notes, they supported 726,000 direct and indirect jobs and contributed $50bn annually to the US economy. Lott faults the US Congress for not coming up with additional economic relief, even as the institutions provide a vital service to the public.

“As museums are filling critical education gaps across the country, they are pleading with their federal, state and local governments to provide the much-needed support to recover from this crisis,” she says. “Congress and the Administration are failing museums.”