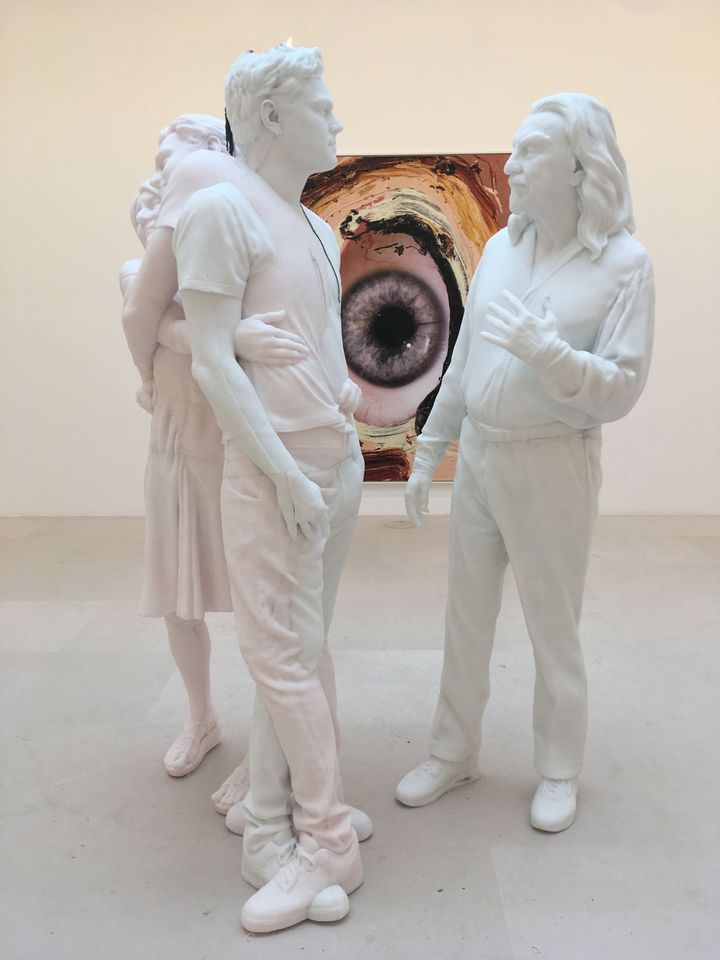 For his exhibition at Gagosian opening today in Paris, Urs Fischer has made a monumental wax sculpture, Leo, of the Hollywood star Leonardo DiCaprio with his parents, George DiCaprio and Irmelin Indenbirken.

The larger-than-life size work, made in a foundry in Switzerland, is composed of a double portrait of the American actor. One portrays him chatting to his father, who is standing separately, and the other—which is linked to the first like a conjoined twin—portrays him embracing his mother, the two of them smiling.

Produced in a delicate palette of white and pale pink, with care taken to convey the folds and creases of fabric in the trio's clothes, the multi-perspectival sculpture has already been set alight. The wick above the upright Leo is slowly dripping black wax down his hair and T-shirt. As the ephemeral work gradually melts away over the course of the exhibition, the piece will become lined with black, creating a kinetic, transformative effect. Fischer will be giving an edition of the piece to the actor.

“I've known Leo for years, we have common friends and have been on vacation [together],” Fischer says. “He asked me to do a portrait of him and normally I say 'no' [to commission requests] but some months later I said 'yes'. He is someone in control of his image and I thought it would be interesting to situate [the sculpture] outside of that [professionalism].”

Keen to show a more personal side to the Hollywood star, the Swiss artist decided to depict him with his parents who divorced one year after his birth and create a “family portrait”. After convincing mother, father and son to all meet one afternoon in Los Angeles, Fischer used an optical scanner to capture their interaction.

Back in his New York studio, however, he realised that translating the encounter sculpturally would be tricky. “I tried to find something that works with all of them but I couldn't find the right energy or a triangle that worked,” he recalls. “Then I just found this situation and kept the [mother and father] separate.”

Born in 1973, Fischer first exhibited monumental wax sculptures at the Venice Biennale in 2011. On display in the Arsenale were a copy of the 6.5-metre-high Mannerist sculpture, The Rape of the Sabine Women, by the Flemish-Italian sculptor Giambologna; a depiction of this friend and fellow artist Rudolf Stingel and an office chair from Fischer's studio.

Asked about the appeal of making ephemeral works in wax, Fischer replies: “You can make a decorative portrait like this because it's not permanent. If you make it from a permanent material, like marble, it becomes so heavy.”