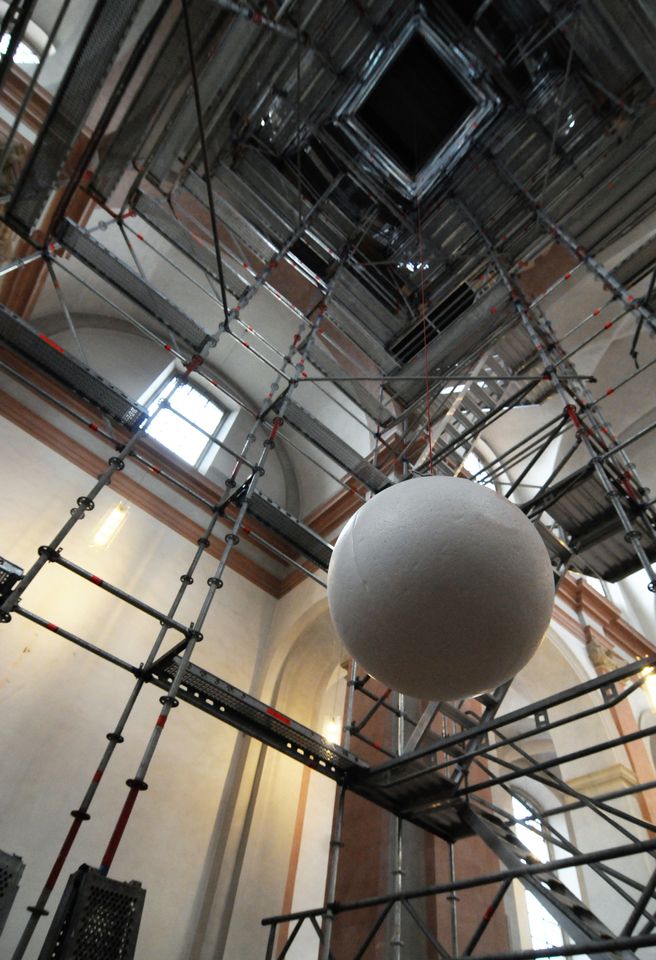 A Foucault pendulum created by the German artist Gerhard Richter is set to swing permanently from the dome of a deconsecrated Catholic church in Münster this weekend.

Invented by the French physicist Léon Foucault in 1851, the pendulum convinced the Catholic church of the Earth’s rotation, something its leaders had previously denied. Richter’s work comprises a 48kg brass ball suspended on a 29m-long cable from the dome of the early Baroque Dominican Church. A magnet created by the physics department of Münster University keeps the ball moving constantly over a circular space with a stone surface, where the church altar stood until it was removed to make way for the pendulum.

As a result of the earth’s rotation, the path of its oscillation moves slowly east. A full rotation takes 30 hours in Münster (the time required for a Foucault pendulum to rotate varies according to its location). Four rectangular panes of grey glass, each six metres long, reflect the pendulum’s motion and its viewers from the dome of church.

Richter, who will attend the inauguration ceremony on Sunday (17 June), says that he is fascinated by the history of Foucault’s pendulum and has long wanted to create his own. Announcing the plan last year, he said: “It particularly appealed to me to put it in a church, because the church had a different view [of the physicist’s discovery] at the time.” The pendulum “represents a small victory for science”, he said.

The artist's work, which will be open to the public, is intended to be meditative rather than entertaining. For the mayor of Münster, Markus Lewe, its presence in the church “gives Münster’s profile as a city of culture an additional impetus of international appeal”. Richter envisages the church as a space for cultural events and wants his installation to provide a backdrop for concerts, lectures, readings and similar events.

The early 18th-century Dominican Church was badly damaged in the Second World War and reconstructed in the 1960s. It was most recently used by the university, until it was deconsecrated in November 2017, in part because it urgently needed renovation. The organ, as well as the altar, has been removed. The city estimates the cost of renovating the church and installing the work, which Richter has donated, at €650,000.