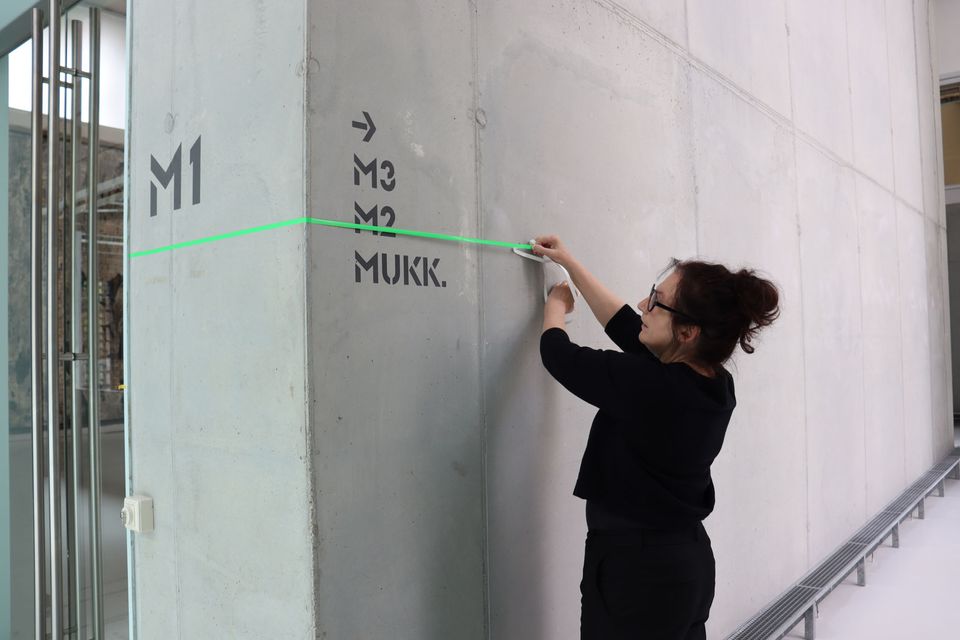 One of the first German art museums to reopen after the coronavirus lockdown is giving visitors a chance to practice social distancing in the foyer.

At the Brandenburg State Museum for Modern Art in Cottbus, around 100km southeast of Berlin, visitors in pairs can each take one end of a selection of poles and ribbons exactly 1.5m long, the minimum distance the German government proscribes for contact between people from different households. The distance is also marked out on the foyer floor. (It instantly becomes worryingly clear that it is considerably further than the space between shoppers in a Berlin supermarket on a Saturday.)

“A museum is a free space designed to open new horizons of thought, but we don’t function independently of the reality out there,” says Ulrike Kremeier, the director of the Cottbus museum, which reopened on 1 May. 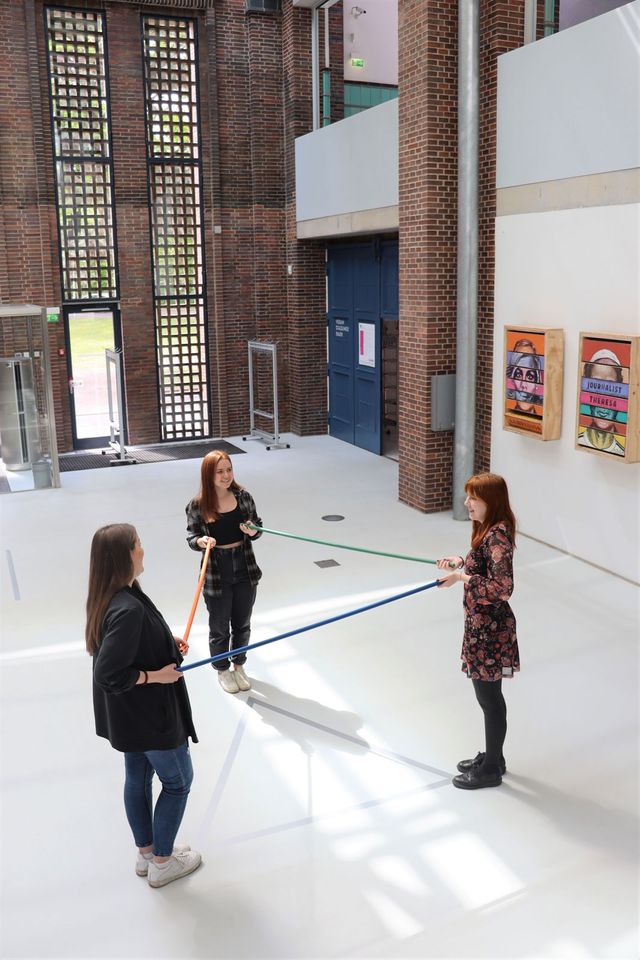 Visitors in pairs can each take one end of a selection of poles and ribbons exactly 1.5m long © Bmlk

The reopening of the museums is unfolding gradually, with variations in the guidelines issued by different states. In Berlin, museums can open this week, but only a few have announced plans to do so. “It’s not a trivial thing to reopen a museum,” Hermann Parzinger, the president of the Prussian Cultural Heritage Foundation, said in an interview with Monopol magazine. One of the main concerns is the length of time visitors tend to stay in one room, which raises the risk of infection, he said.

At the Cottbus museum, a video in the foyer presented by Kremeier examines solutions devised by artists and architects of the past for personal protection in public. One work she discusses is a photograph by Weegee, Boy Meets Girl—From Mars, a couple embracing in spherical transparent helmets. Another is the Austrian architect Walter Pichler’s Big Room (1966), a pneumatic, bubble-like mobile office.

“Someone is getting very rich out of this.” Ulrike Kremeier, the director of the Cottbus museum

Kremeier is planning to integrate other pandemic-themed displays into the museum’s space. “Handshaking, for example, is now impolite,” she says. “How do we replace this ancient gesture, which was originally a gesture of peace—a way of showing you are unarmed?”

Home to the biggest collection of East German art in Germany, the Brandenburg State Museum for Modern Art is located in a former diesel power plant built in 1927. Its main current exhibition is a show of photography from 1990, the year of German reunification, including works by Barbara Klemm and Gerhard Gäbler. It was on view for just two weeks before the museum was forced to close in March. 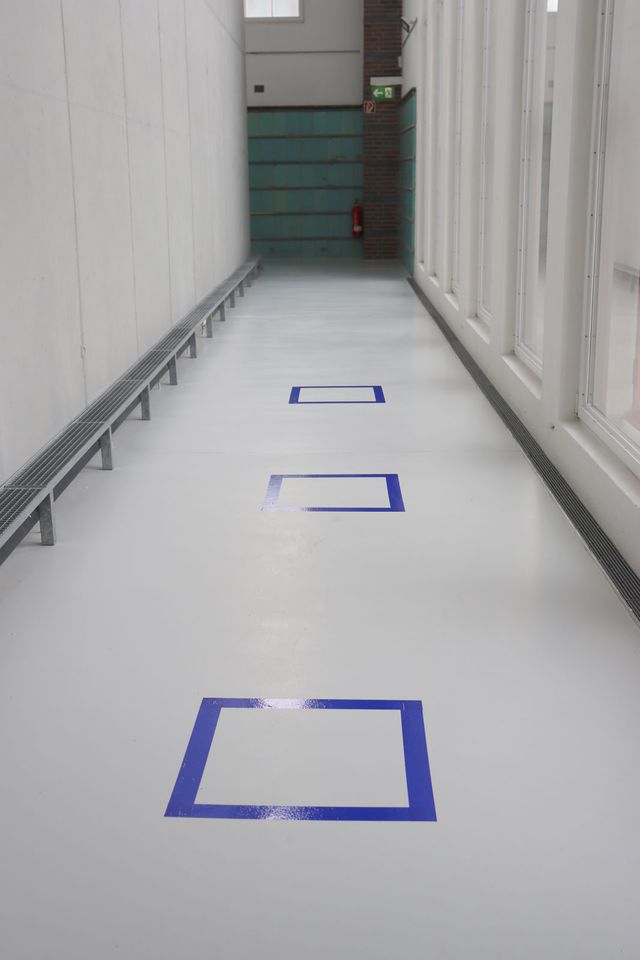 The German government proscribes minimum distance of 1.5m long between people from different households is marked out on the museum's foyer floor © Blmk

The museum has introduced precautions: a plexiglass shield at the counter and hand disinfectant for visitors that “cost a fortune,” Kremeier says. “Someone is getting very rich out of this.”

Staff have calculated how many people to allow into each room to ensure 20 square metres per person, and say the museum’s full capacity is no more than 100 at a time. “Our visitors are sensible people,” Kremeier says. “I don’t anticipate problems.”

In normal times, many of the museum’s visitors are group tours, which probably will not start again until the autumn, she says. Instead, up to two visitors at a time can book a 20-minute tour for the symbolic cost of €2. Masks are not obligatory but recommended.

The museum has lost revenue. “Usually, we generate income and that’s not happening,” Kremeier says. “I don’t want to save money on artists. That would be the wrong decision.” 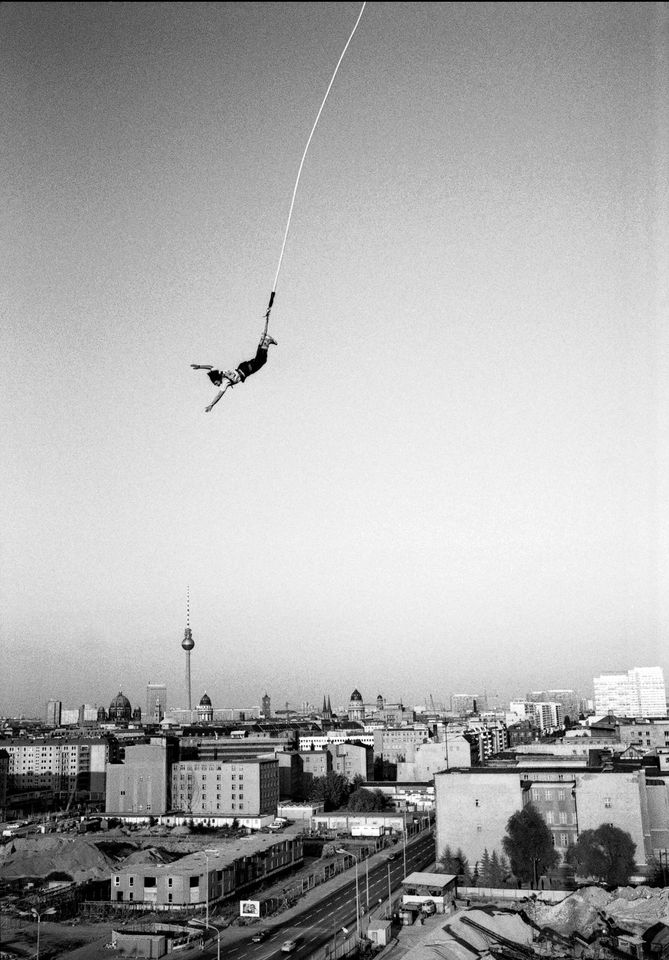 Ludwig Rauch's Sprung ins Glück ( Jump into happiness, 1990) is part of the museum's exhibition on photography from 1990 © Ludwig Rauch

The German government is negotiating a “culture infrastructure fund” to help institutions struggling with a loss of revenue from the pandemic lockdown. The Kulturrat, the association of cultural institutions and creative industries, has called for a fund of €500m.

On April 30, the government announced funds of €10m to finance precautionary measures in small and medium-sized museums as they reopen after the lockdown. The national museums’ association has suggested special time-slots for vulnerable visitors, extended opening hours, increased cleaning, and masks on request for visitors.

“We have to make sure that the visitor flow is evenly distributed,” Parzinger told Monopol magazine. He did not want to give opening dates for Berlin’s state museums yet, but said only a few will open initially, with online tickets for specific time slots and a requirement to wear masks.

Among the Berlin museums reopening are the Bröhan Museum of applied arts on 12 May, with an exhibition of the painter Hans Baluschek (1870-1935), and the new wing of Schloss Charlottenburg, which opens the same day. The main palace area remains closed.

The German Historical Museum opens its exhibition about Hannah Arendt, located in the modern extension, on 11 May, but the main museum is also staying closed for now. The Barberini Museum in Potsdam opens 6 May with a Monet exhibition that is extended until 19 July.

And while Christo’s planned wrapping of the Arc de Triomphe has been pushed back to 2021, Deutsche Bank’s Palais Populaire will from 6 May open a retrospective titled Christo and Jeanne-Claude: Projects 1963-2020, Ingrid & Thomas Jochheim Collection. The show features the duo’s veiling of the Reichstag 25 years ago.

From tomorrow, Dresden's newly renovated Gemäldegalerie Alte Meister will begin welcoming a limited number of visitors (no more than 200 at a time.) Visitors to the Gemäldegalerie can register their contact details online. Should it later emerge that someone infected with coronavirus has entered the museum, they will be notified. The Schirn contemporary art museum in Frankfurt is opening on 6 May, followed by the Städel on 9 May.