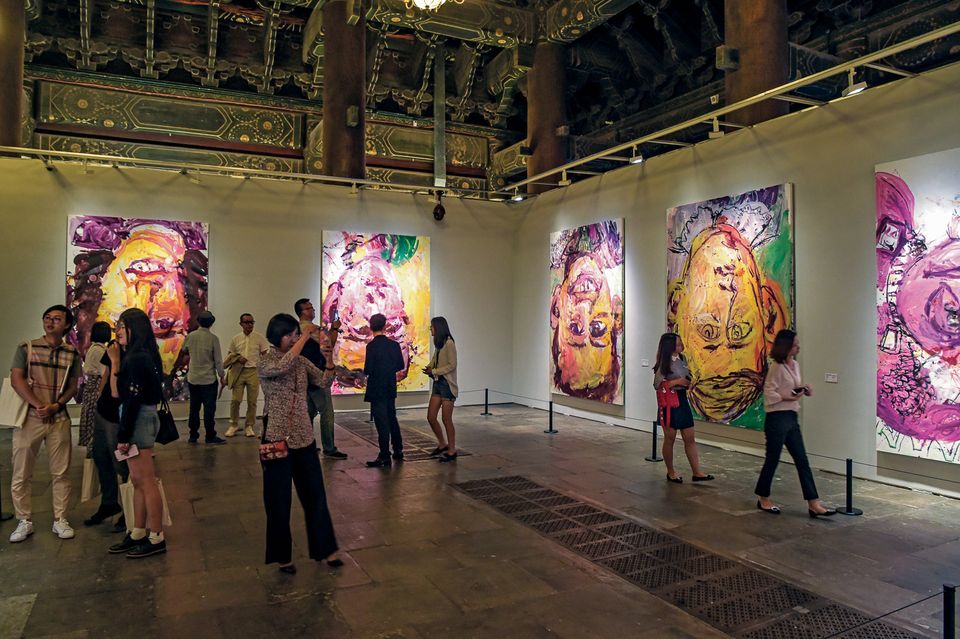 Works by Georg Baselitz travelled to Taimiao temple in Beijing for the Deutschland 8: German Art in China shows Daniel Biskup

The German Foreign Office is planning an initiative to co-ordinate major international exhibitions of art drawn from the country’s museums. It is part of a drive led by Andreas Görgen, the foreign office’s head of culture and communication, to boost Germany’s cultural presence in the world and to foster greater exchange with institutions and curators abroad. Görgen says his vision for a “post-national culture policy” extends beyond such international strategies as the Louvre and Guggenheim outposts or the British Museum’s partnerships.

“The museums in Germany are still at the very beginning,” Görgen tells The Art Newspaper. “The marvellous Martin Roth once gave a kick-start during his time in Dresden. It is about time to carry his initiative forward.” Roth, the former director of the Dresden State Art Collections and the Victoria & Albert Museum in London, died in August. He first launched a plan for closer co-operation on international projects in 2007, and had support from the foreign office, Görgen says. But the idea was set aside for many years.

For Görgen, a global approach to cultural policy has two aims: to promote German culture abroad and to give foreign museums access to the collections and scholarship of German institutions. “We should be willing to free things from the context of our collections and to let other curators look at them and deal with them in their own context, which might give a completely different interpretation,” he says. He is also interested in the potential of digitisation, and how virtual reality can allow objects to be shown without travelling.

In a global political landscape of growing nationalism and authoritarianism, it is important to the foreign office to facilitate “access to culture and education in a world in which space for culture and education is being increasingly limited in many places and by many means”, Görgen says. “We are therefore aware that we are championing something many see as a threat. We are championing the dissolution of the usual borders.”

Marion Ackermann, the current director of the Dresden State Art Collections, has taken up Roth’s legacy, organising a symposium in September called The Role of Encyclopaedic Museums in Politically Complex Times. The group of 15 museums stages several exhibitions a year abroad and has a dedicated international department. “When you are dealing with critical subjects—in fact anything that goes beyond a presentation of masterpieces from the collection—it is useful to have advice and support from the foreign office,” Ackermann says.

Görgen has invited her and other German museum directors, including Peter Weibel of the ZKM centre in Karlsruhe and Udo Kittelmann of the National Gallery in Berlin, to a meeting at the foreign office. He wants to discuss plans for the new exhibitions bureau before parliamentary budget negotiations begin. He is adamant that the primary focus will be cultural, not political or diplomatic.

“The idea is to create an agency for the museums—they have to take the initiative if they are interested,” Görgen says. “We will ensure they have the money to implement what they decide on.” The artists Joseph Beuys and George Grosz are among the subjects under consideration for future shows, Görgen says.

Goethe-Institut Teams Up With France in Turkey

Germany’s Goethe-Institut and France’s Institut Français are teaming up in places where just one or the other is represented to create at least ten joint culture institutes over the next four years—an example of a “post-national” cultural policy in action. In Turkey, Germany is working with the Institut Français, Dutch and Swedish partners and Turkish foundations. The German Foreign Office has approved funding of €1m towards new common cultural institutes in the cities of Gaziantep, Diyarkabir and Izmir. It says the locations are “quite deliberately selected as they are beyond the metropolises of Istanbul and Ankara”.