Getty acquires Bronzino’s Madonna and Child with Saints, a twin of National Gallery in London’s

The brightly coloured painting, depicting the same family scene, has been in private hands for decades, most recently the Chilean Alana Collection The Getty Museum has acquired Agnolo Bronzino’s Virgin and Child with Saint Elizabeth and Saint John the Baptist, around 1540-45 Courtesy the Getty Trust

One of the most celebrated Madonna paintings at the National Gallery in London—Bronzino’s Madonna and Child with Saint John the Baptist and Saint Elizabeth, from around 1540—now has a near-identical twin in the US. The Getty Museum in Los Angeles has quietly acquired a more colourful version of the painting and is putting it on display today.

The Getty is calling it “the single most important addition to our 16th-century paintings collection” in decades. “Virgin and Child with Saint Elizabeth and Saint John the Baptist is an arrestingly beautiful work that counts among Bronzino’s most spectacular religious pictures,” added Timothy Potts, the Getty Museum director, in a statement.

Both paintings shows baby Jesus and an infant Saint John the Baptist held serenely by Mary with Saint Elizabeth peering, more worriedly, over her shoulder. Jesus grasps a reed cross that foreshadows his crucifixion. The Getty version has the same basic arrangement of figures as the National Gallery’s with differences in the drapery of their clothing, the rotation of the cross, the flowers that make up Christ’s crown, and a few other details. Most dramatically, the Getty version has a more vivid colour scheme dominated by Mary’s bright blue mantle and red robe, leading the scholar Carlo Falciani to conclude it represents a scene at dawn, while the National Gallery version is set at night. 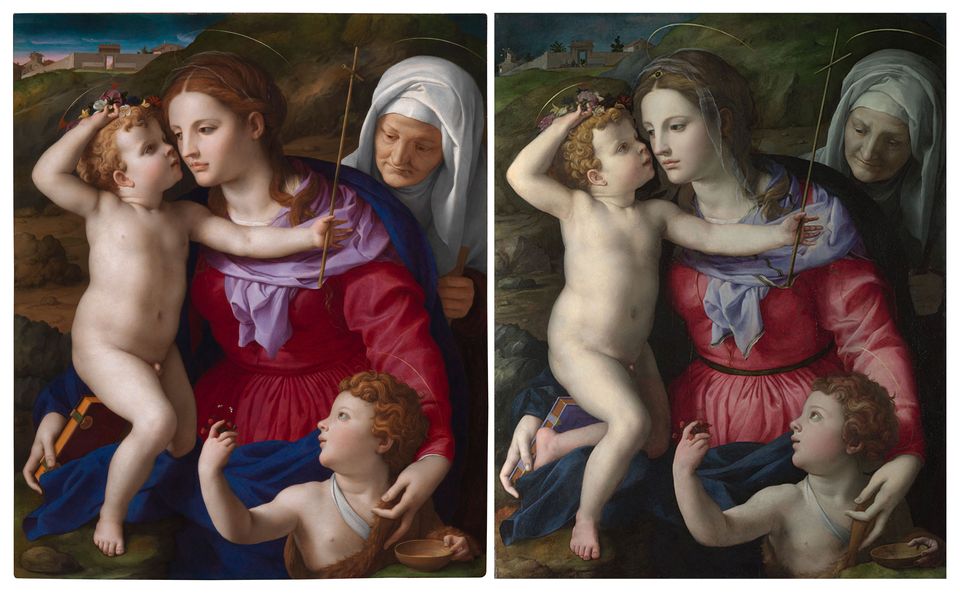 The Getty’s senior curator of paintings, Davide Gasparotto, says the painting shows Bronzino “at the height of his powers. With its controlled line, gleaming marmoreal forms, enamel-like surface, and lavish use of expensive pigments, it is an opulent, precious object.”

The Getty Bronzino has long been held in private hands and has no known exhibition history. For years, it had been attributed to Andrea del Sarto, but by the time it appeared in a Christie’s sale in London on 20 March 1964, cataloguers noted a Bronzino signature in the lower-left corner. At that time, it was sold to Galleria Schubert of Milan for 4,000 guineas (£4,200 pounds), around £83,500 adjusted for inflation today. Most recently, from 2015 to 2019, it belonged to the Chilean billionaire Alvaro Saieh Bendeck and his wife Ana Guzmán Ahnfelt, the founders of the Alana Collection. (Other Italian Renaissance paintings from the collection are currently on view at the Musée Jacquemart-André in Paris.)

The Getty’s purchase price was not disclosed, but the museum has a larger acquisition fund than its peers because of its support from the Getty Trust, which has a roughly $7 billion endowment. At the same time as announcing its Bronzino acquisition, the museum also revealed its purchase of Giovanni di Balduccio’s Annunciation, a pair of marble sculptures from around 1333-34. They rank as the largest sculptures to survive from a chapel in the Rocca di Porta Galliera, the Bologna papal fortress destroyed in the 14th century, and will go on view at the Getty in December.