How to build the next American president 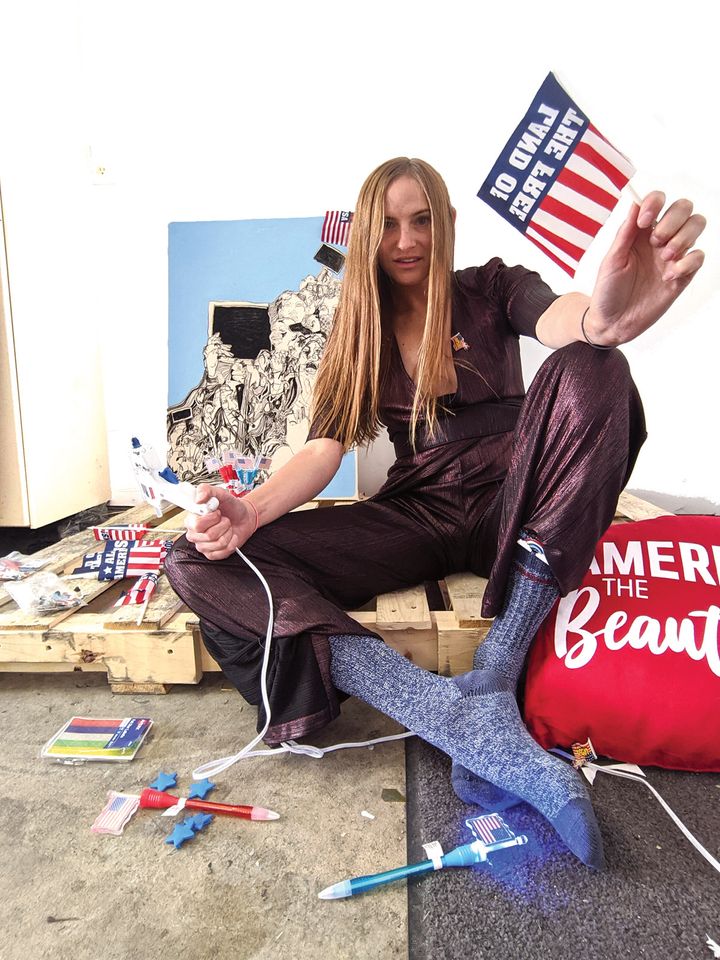 In The Next American President, Gretchen Andrew uses the inspiration of mood boards to develop ideas and themes exploring her ideal qualities for a leader: “a kind, democracy-respecting, loving person” Courtesy of the artist

Gretchen Andrew, the painter and internet artist (and a member of The Art Newspaper’s XR review panel), has been manipulating search engine optimisation (SEO) to make her dreams come true—at least virtually so. If you run a Google image search for the phrase “cover of Artforum”, the first 17 images (at the time of writing) are all works by Andrew, despite the fact that she has never actually been on the cover of the magazine. If you search “Frieze Los Angeles”, some of the top results are images of Andrew’s paintings digitally rendered to appear in the fair; she once used the same methodology to get her to the top of the “Whitney Biennial” search results. For her latest project, called The Next American President, Andrew has made a series of paintings inspired by the aesthetics of vision boards to “manifest” the ideal leader—”a kind, democracy-­respecting, loving person”—and these works now take up the majority of top slots when that phrase is Googled.

“For The Next American President, I generate the imagery of the vision boards by thinking about what I want in my future and in my life, so in that way, they’re very personal. It’s a very unique power trip to be able to reprogramme the internet to make it what I want it to be,” says Andrew. “The imagery is meant to be innocuously personal, but I always have an eye to the ways in which that is quite political.” 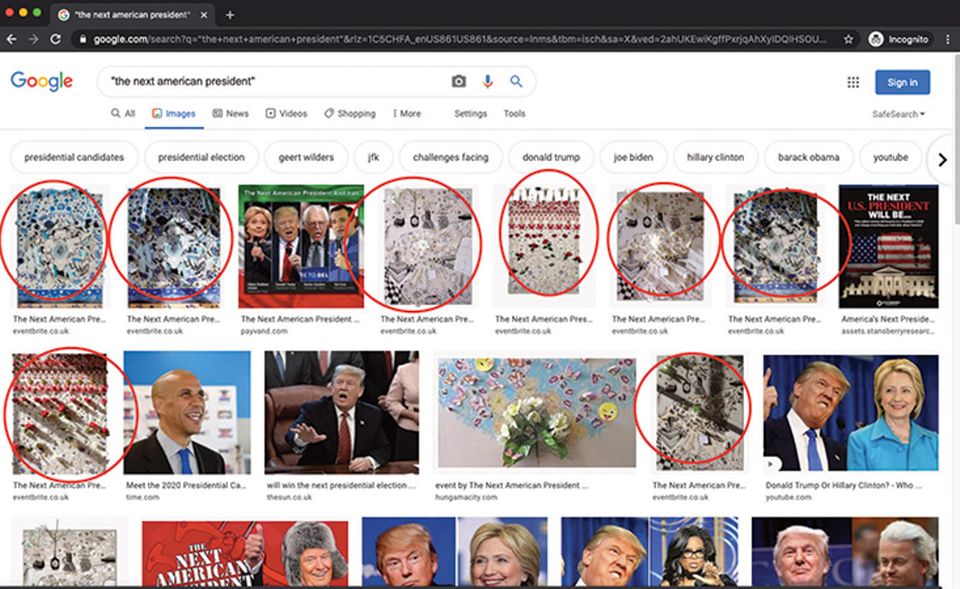 Works in the series include traditionally feminine imagery—flowers and butterflies abound—and the vision-board format, complete with collage elements, adds a level of kitsch. “I think it’s quite subversive to make work that is activist but doesn’t look the way we consider activism to look,” Andrew says. “We have these assumptions about how things have to look, so rewriting these narratives through the imagery is essential to what I’m thinking about.” A suite of these vision boards are now on view in a virtual show, Future News, at the Monterey Museum of Art in Monterey, California.

After an 18-month stint designing internal software for Google, Andrew left the tech world for the art world in 2012. She studied under the British painter Billy Childish, making paintings emulating his style that she called After Billy Childish. After she began posting images of the works online, Google was unable to parse the difference, and search results for Childish began to favour Andrew’s paintings. This unintentional achievement sparked the idea for Andrew’s future internet manipulations.

“I realised that one of the neatest ways to manipulate the internet is that the internet can’t parse desire,” Andrew explains. “So when I say, ‘I really want the next American president to have read the following books,’ and I make a vision board about that, Google doesn’t understand that there’s space between what I want and what has actually happened.”

While the language of the web pages Andrew creates is necessarily fantastical, there is an earnestness to her desire to insert herself into major cultural events and political discourse. “Do I want to be a part of these things? Absolutely. It’s all sincere. Maybe it’s a bit exaggerated, but yes, I’m inserting myself into spaces that I would love just to receive an invitation to,” she says. “To admit that you want something is to admit that you don’t have it and that’s really hard to do.” The work has however begun to fulfill its own prophecies; an advertisement for Andrew’s Monterey exhibition, featuring a painting from her Cover of Artforum series, has been placed in the October issue of Artforum.

“I think about the art world in the same way I think about the internet, in that there is a system of rules and the rules are sometimes clear and sometimes unclear,” Andrew says, adding that her role is to navigate these rules “in a manner that’s authentic and personal”. There was a period, however, when Andrew felt that such authenticity was not going to suit her career. “There’s a lot of assumptions about who a great painter is, what they look like, and the various personas allowed in that field. I’m a blonde chick from California; it doesn’t matter that I’ve lectured at Cambridge on artificial intelligence and published papers in the British Computer Society journal.”

After years of trying to mitigate the perceptions of her identity, Andrew has decided to proceed with authenticity and, with The Next American President, she opted “to lean into every single cliché and every single perception of limitation based on what I look like and how I conduct myself,” she says. “Instead of trying to build that bridge, I decided to blow it up and dare people to question if what I’m doing is serious.” Whether her presidential campaign pays off will be seen on 3 November.