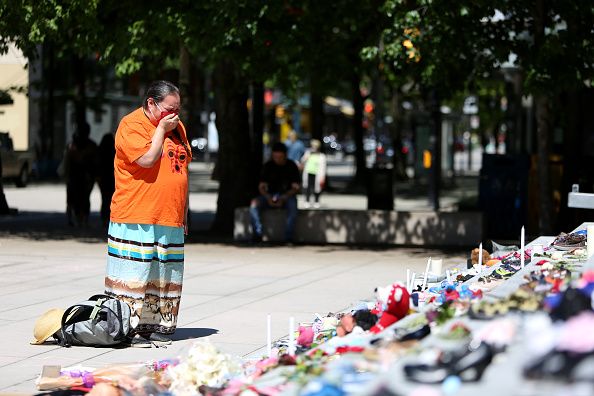 A memorial on the steps of the Vancouver Art Gallery honouring the 215 Indigenous children whose unmarked graves were discovered last week on the grounds of a former residential school in Kamloops, British Columbia, has become a makeshift community shrine.

The memorial, consisting of 215 pairs of shoes, was created by the Vancouver-based Haida artist Tamara Bell last Friday, after Tk’emlups te Secwepemc Chief Rosanne Casimir announced that the remains of children as young as three years old had been discovered using ground-penetrating radar.

“As the daughter of a Residential School survivor,” Bell says, “I felt a deep desire to create something in solidarity and support.” 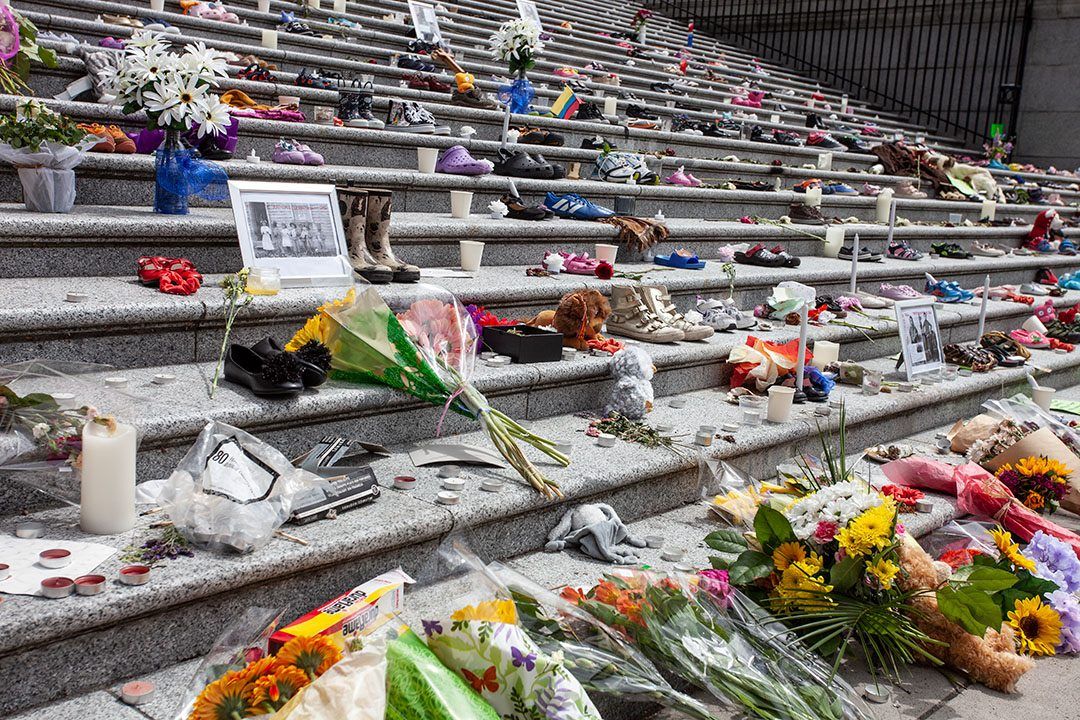 With the help of several First Nations friends, Bell assembled the shoes, each pair symbolising one of the dead children, on the steps of the Vancouver Art Gallery’s southern entrance, in the Neo-Classical Edwardian building that was a provincial courthouse before it was repurposed as an art gallery in 1983.

“We added teddy bears and small toys, with my son donating his two favorite stuffed animals,” Bell relates. “Then we offered tobacco and other medicines for healing and prayed and sang songs to honour the children. People from Haida Gwaii to Alberta joined in the blessings of the shoes. A protection and journey song accompanied the display, allowing for the respect necessary.”

Since then, the memorial has become a gathering place for those mourning the loss of the 215 children, as well as the estimated 6,000 others who died in the schools administered by churches and the federal government for more than a century. Members of the public have augmented the installation with spontaneous additions, laying candles, flowers, toys and messages of condolences alongside the rows of shoes.

Images of the memorial have become a social media touchstone for those calling for a national reckoning, not only for the children of the Kamloops Indian Residential School, once one of the largest in the country with more than 500 students, but for other victims of a system notorious for widespread physical and sexual abuse and negligence. Many of those images were taken by photographer Tina Taphouse, whose mother once worked at the Kamloops school, but gave her up for adoption so her daughter would not have to attend.

The school—opened in 1890 by the Catholic Church, taken over by the federal government in 1969 and closed in 1978—was one of more than 130 establish nationally, the last one closing in 1996. Initiated in 1874 by Sir John A. Macdonald, Canada’s first prime minister (who also approved the execution of Metis leader Louis Riel for treason in 1885), the schools were part of an aggressive assimilation campaign to “take the Indian out of the child”, by routinely punishing children for speaking their own languages and engaging in their cultural practices. The system was named as part of Canada’s “cultural genocide” of First Nations people by Canada’s then chief justice Beverley McLachlin, in 2015.

Similar tributes to the lost children have been created across Canada, including at the Reach Gallery Museum in Abbotsford, on the steps of city hall in Saskatoon, and at the entrance to Francis Xavier Mission Catholic Church in Kahnawake. Another is being organised at Canada House in London, on Trafalgar Square, by the photographer and film-maker Amanda May Daly, who is of Anishinaabe and western European ancestry. 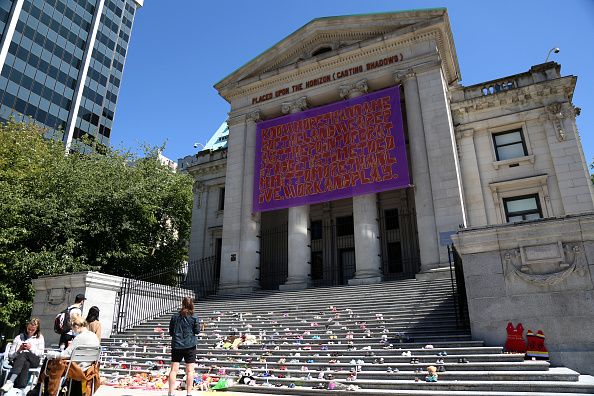 The memorial has become a gathering place for those mourning the loss of the 215 children, as well as the estimated 6,000 others who died in the schools administered by churches and the federal government for more than a century Photo by Mert Alper Dervis/Anadolu Agency via Getty Images

The shoes recall the activism of the late Jamie Lee Hamilton, who famously dumped 67 pairs of stiletto heels on the front steps of Vancouver City Hall in 1997, to protest the lack of official investigation into missing, mainly First Nations women, in the city’s downtown Eastside, a decade before serial killer Robert Pickton went to trial for their deaths.

And the choice of location, beyond the Vancouver Art Gallery’s de facto status as a town square, recalls the work of the Anishnaabe artist Rebecca Belmore, who used the site for her 2010 performance piece Worth, because of its history as a place where many First Nations peoples were sentenced to incarceration. "Recognizing the painful histories enacted in our building, a former provincial courthouse and jail, we believe the Gallery has a responsibility to be part of telling these stories and demonstrating the care, empathy and critical resolve needed to make the world a better place and to celebrate life," the museum stated on its social media.

Now the very steps native peoples once climbed to face government “justice”, have become a beacon for a national tragedy and the nexus of a rallying cry for accountability.