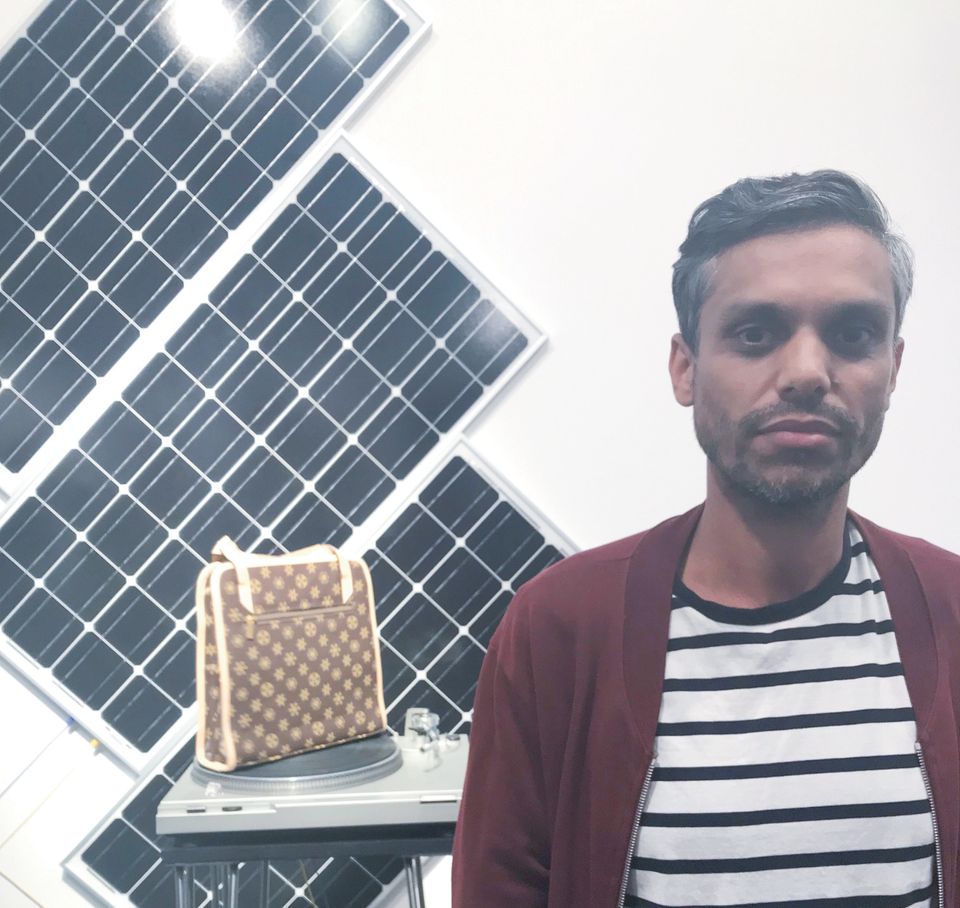 Two new works by the UK artist Haroon Mirza that are on show at Frieze London, featuring “imitation” Louis Vuitton bags and wallets, come with a pointed message. The installations were created in response to window displays in various cities by the French fashion house that Mirza says are “blatant appropriations” of his solar-powered sculptures.

One piece, called Counterfeiting the counter fitters (2018), consists of a bag spinning on a turntable powered by solar panels attached to the wall; it sold at Lisson Gallery to a Chinese foundation for £45,000. The other, Point of Sale (2018), features a wallet placed on top of a rotating solar panel and fetched £22,000 at François Ghebaly.

Mirza says there are four elements that are central to his installations that Louis Vuitton has appropriated in some way: solar panels in geometric configurations that power electrical components, usually LEDs or turntables, with found objects spinning on them, and exposed power cables. “I was flattered, because it is nice to see your work having an impact, but at the same time, it felt like complete exploitation,” Mirza says.

The artist considered taking legal action but decided instead “to open a dialogue” with the fashion brand by making works using bags “inspired by” Louis Vuitton’s famous monogrammed accessories. “I am interested in the rules around appropriation,” he says. Louis Vuitton did not respond to a request for comment.

François Ghebaly, the director of the eponymous gallery, says that the fashion brand’s displays “were so obviously derived from his practice that Mirza had to respond in some way”. He points out that Louis Vuitton operates a zero-tolerance policy on counterfeiting, as laid out on its website. “Louis Vuitton is known for talking about copyright and counterfeits as threatening the brand, which Mirza also riffs on,” Ghebaly says.

Louis Vuitton’s parent company, LVMH, opened an art foundation in Paris in 2006, “epitomising the support for art, culture and heritage they have been providing for nearly 25 years”, according to its website. It is a description Mirza takes umbrage with. “How can LVMH be so engaged with collaborating with artists, and collecting and presenting works, while doing something that is blatant appropriation?” he asks. “I worked out that if Louis Vuitton had bought the works from Lisson [to create their window displays], it would have cost several million. Were they going to do that? No. Are they going to make far more than that selling the bags? Yes!”

Around five works in the new series, called Rules of Appropriation, are due to go on show at Birmingham’s Ikon Gallery on 30 November in the exhibition Haroon Mirza: Reality Is Somehow What We Expect It to Be (until 24 February 2019). They will be shown alongside a film on which Mirza collaborated with the London-based fashion designer Osman about a leather tanning factory in Bangladesh.