Work was painted last night at Marble Arch, where the climate change group had set up base camp for ten days of demonstrations 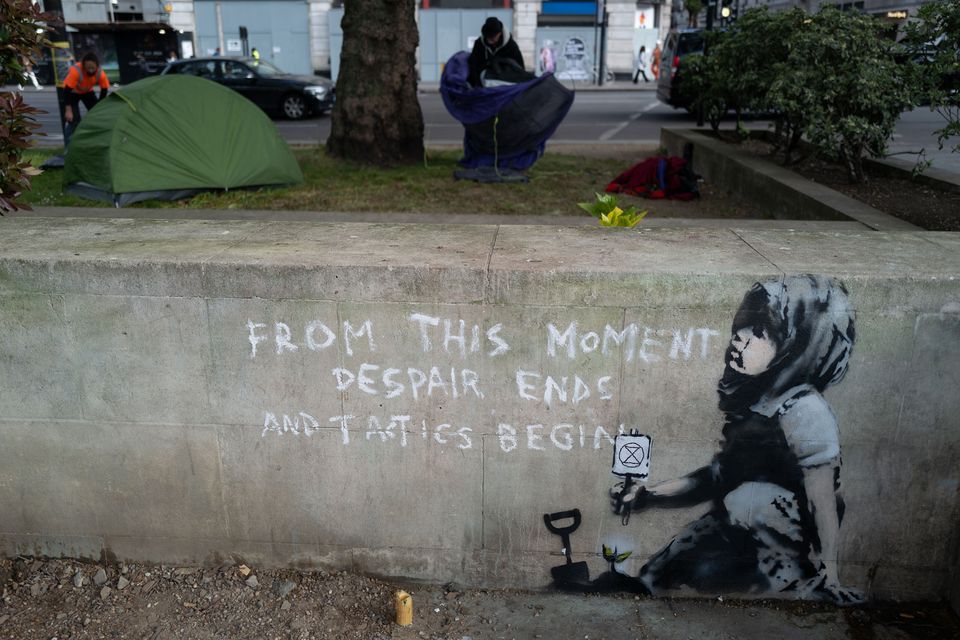 A new piece of street art believed to be by Banksy appeared on 26 April in London. The works shows a child holding a small Extinction Rebellion sign crouching by a newly-planted seedling with the words "From This Moment Despair Ends And Tactics Begin" Photo: Leon Neal/Getty Images

As Extinction Rebellion protesters cleared their base camp at Marble Arch in London yesterday, it seems Banksy left a poignant memorial to the climate change group’s actions over the past ten days, as well as galvanising hope for the future.

Overnight on Thursday, a mural appeared depicting a young girl holding an Extinction Rebellion sign crouching by a freshly planted sapling, with the caption “From this moment despair ends and tactics begin”.

The Bristolian street artist has not yet confirmed the piece as his on his website or Instagram, but Extinction Rebellion is claiming the painting as Banksy’s on Twitter. The group says: “New #Banksy appeared at Marble Arch site of #ExtinctionRebellion last night: ‘From this moment despair ends and tactics begin. Despair is the infantile disorder of the revolutionaries of everyday life.’ Quote from Raoul Vaneige’s The Revolution of Everyday Life, 1967.”

A source close to the matter says it is likely the piece is by Banksy as he has been on board with Extinction Rebellion for some time.

Another Bristol-based artist and musician, Robert Del Naja (or 3D in graffiti circles) has been a vocal supporter of Extinction Rebellion. His band, Massive Attack, played a surprise hour-long set last Sunday night at Marble Arch, going under the name The Stroud Village Green Band. Rumours that Del Naja is Banksy have circulated for years, but are unsubstantiated.

According to the BBC, protestors are now working to protect the mural. Londoner Calvin Benson, 48, told the news service he had camped at the site last night because the work “needs to be preserved, we’ve just had an historical event over the last ten days”.