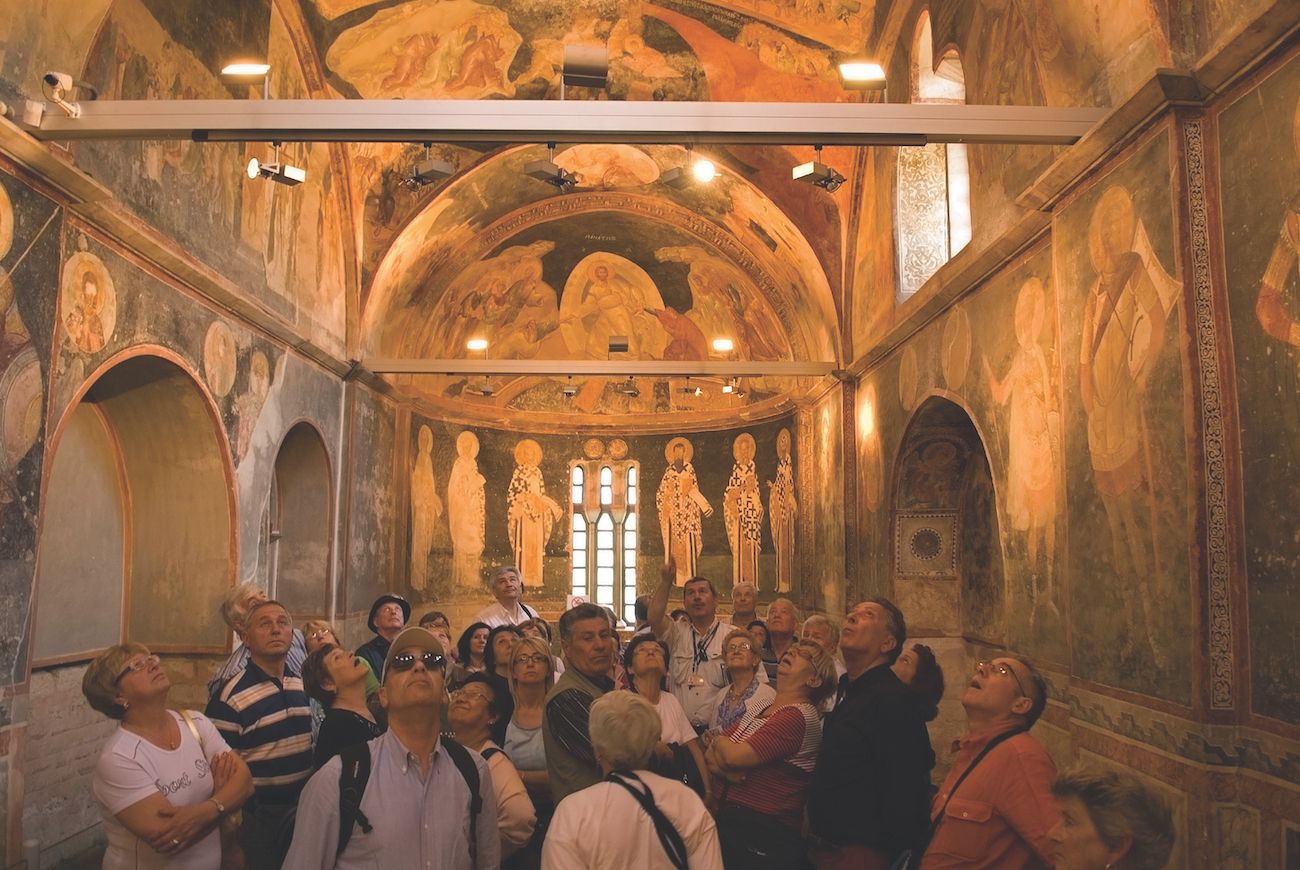 Turkey’s abrupt decision at the end of last year to cancel Islamic prayers at the Chora museum—built as a cathedral a millennium ago before becoming a mosque, then a museum—has cast doubt on controversial plans to reconsecrate the monument.

The government’s announcement in August that the Church of the Holy Saviour in Chora, called Kariye in Turkish, would lose its neutral status triggered an outcry from Unesco, foreign governments and scholars over the risk posed to 14th-century Byzantine mosaics and frescoes inside the building, known as the Sistine Chapel of Istanbul.

President Recep Tayyip Erdogan was due to attend inaugural prayers on 30 October, but the country’s top religious authority cancelled the event the day before to allow for restoration work.

Since then, the site has been closed and workers removed a minbar (pulpit) and screens in November, according to local shopkeepers. A spokesman for the Religious Affairs Presidency says that no new opening date is set for the mosque. The head of the Directorate General of Foundations, which is overseeing the restoration, would not comment on the move.

It is a sharp contrast with the fanfare that accompanied the July conversion of the sixth-century Hagia Sophia museum, when Erdogan recited the Quran and thousands of faithful attended the first Friday prayers there in nine decades.

The delay at Chora comes after Unesco dispatched a mission to Istanbul to inspect the two monuments in October. The agency has warned Turkey the unilateral changes may impact its World Heritage standing, Ernesto Ottone-Ramirez, Unesco’s assistant director-general for culture, told The Art Newspaper in October.

“The effective, inclusive and equitable participation of communities and other stakeholders concerned with the property is a necessary condition to preserve this site,” he says, adding that the World Heritage Committee will decide at a session next summer how the changes affect Turkey’s status.

Observers are divided over what the government’s manoeuvring means. “The decision to continue with the restoration means they have likely decided against opening Kariye as a mosque,” says Bahattin Yucel, a former tourism minister. “The backlash from abroad was a factor. Economic concerns are also at play in the likelihood it stays a museum, as it draws large numbers of religious tourists.”

Sections of Hagia Sophia remain off-limits to visitors to comply with Islamic taboos on figurative imagery. Concealing the art at Chora—whose walls and ceilings are clad in masterpieces from the dawn of the Renaissance—will prove more challenging. Footage of motorised blinds mounted to walls circulated on social media in October, sparking alarm that hasty actions would harm the art.

“[Chora] does not have the same symbolic value as Hagia Sophia for conservatives. Its importance is as a Byzantine monument with one of the best-preserved [examples] of figurative Byzantine art,” says Cigdem Kafescioglu, a historian at Bogazici University, Istanbul. Mosaics and frescoes were left in plain sight during Muslim worship throughout much of the Ottoman era.

Hagia Sophia and Chora’s conversions are part of a broader expansion of Islam in public life as the populist government, in power since 2002, tries to shore up electoral support that has eroded during a sharp economic downturn and the coronavirus pandemic.

Kafescioglu says reversing Chora’s conversion is unlikely, considering the support from Erdogan’s religious base. “My guess is that they’ve gotten a sense of international reactions and are trying to do a more palatable job than the rushed Hagia Sophia opening,” she says. “Instead of viewing it as heritage, policymakers see it through a political lens.”