Have mummies, will travel

Hair styled in short, tight curls similar to cuts favoured by French film stars, wax figurines of gods, embalming tools left inside the body, evidence of tuberculosis and, in some cases, even the sex of the mummified individual—details that might have remained hidden had the Field Museum in Chicago not brought in a mobile CT scanner to examine a number of Egyptian and Peruvian mummies from its store. Armed with this new information, the museum, which has one of the largest, if not the largest, assemblages of human Egyptian and Peruvian mummies in the US, is sending more than a dozen of them on the road.

The travelling exhibition Mummies: New Secrets from the Tombs examines the daily life, beliefs and customs of these ancient peoples. The first stop is the Natural History Museum of Los Angeles County (until 18 January 2016).

Although the CT scans took a matter of minutes, the analysis took months. “We got around 100GB of data, which means a lot of time staring at computer screens,” says the Field’s associate conservator J.P. Brown. He compares the imaging technology to a “colossal X-ray salami slicer” that produces a series of images of thin slices through the body, unlike normal X-rays, which cannot see through dense objects such as bone. “All kinds of things pop up on CT scans that would otherwise be difficult to see,” he says, adding that some of what they found contradicted what had been written in the museum’s catalogues. He was particularly surprised by the scan of the Gilded Lady, a Roman-era Egyptian mummy with an “almost poodle-like hairstyle” that had been in the museum’s store since 1893. “Most mummies we looked at were males with shaved heads, so it was amazing to see this elaborate hairstyle,” he says.

Not ideal for a road trip Staff at the museum went to great lengths to ensure that their mummies could safely make the 1,700-mile journey to Los Angeles—a feat that was technically impossible before, Brown says. “They are heavy and fragile, which is the worst possible combination if you’re thinking about sending something on the road,” he says. “Light and fragile is fine, but heavy and fragile is just a nightmare.” High-frequency vibration, the levels of which are difficult to estimate, was of particular concern. Special mounts as well as crates with insulation and humidity buffering sheets had to be made. Relative humidity is always an issue with organic materials. “Too much humidity causes mould growth, and cracking can occur if it’s too dry,” Brown says. “It was quite a design challenge to make these crates. Thankfully, everything looks to have made it to Los Angeles in good shape.”

Real, fake or the frugal option? 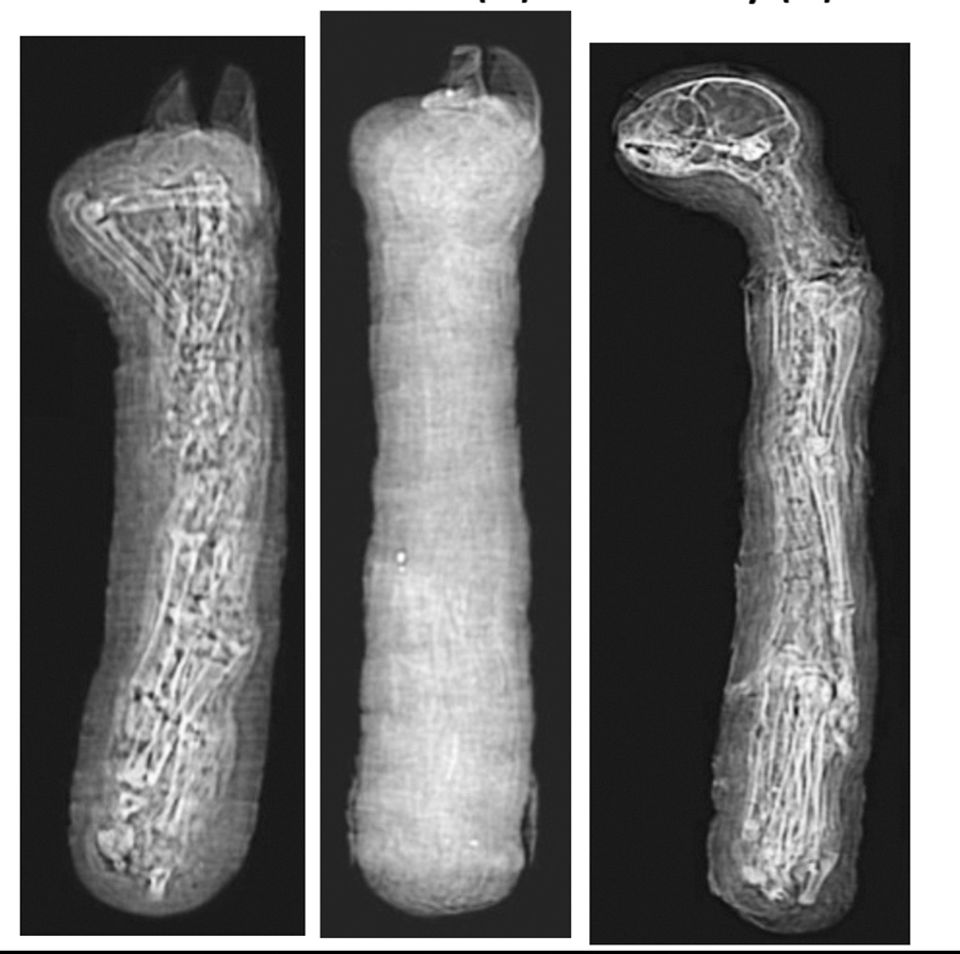 Cat out of the bag: imaging revealed a genuine animal, an empty mummy and a third padded out with materials

Three cat mummies included in the exhibition raise the question of what constitutes a fake. They may look alike on the outside, but imaging technologies have revealed that the similarities end there. One contains a genuine mummified cat, another is empty and the third contains “leather, gravel and someone’s leftover KFC”, says the Field Museum’s associate conservator J.P. Brown. He says the third is most certainly an ancient fake. He points to written evidence of Egyptian priests being disciplined for selling fake animal mummies, as the art of mummification was a lucrative business in ancient Egypt, with temples asking sky-high prices for the hundreds of thousands of mummies they churned out. But Brown argues that the empty mummies were not fakes, but a cheaper option for those who could not afford the real deal. “You only have to pick them up to realise that there isn’t an animal in it. It seems completely implausible that so many of these empty mummies made in the shape of animals could be created and no one would catch on,” he says. “I [initially] bought into the idea that they were fakes, but now I think they were a cheaper version made for a lower caste who couldn’t afford the pricier option.”