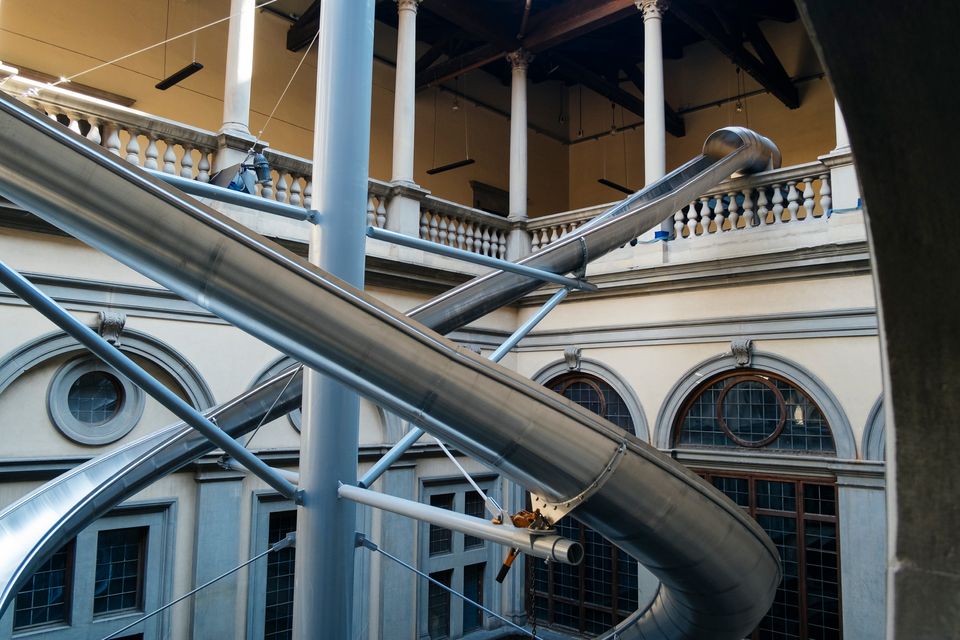 Carsten Höller is putting a new twist on his signature slides at Florence’s Palazzo Strozzi. At the invitation of the museum’s director, Arturo Galansino, the Belgian-born artist has collaborated with Stefano Mancuso, a plant neurobiologist at the University of Florence, to devise an elaborate ecological project for the 15th-century palace.

The Florence Experiment, which opens tomorrow, 19 April (until 26 August), invites visitors to descend from the building’s upper loggia to the courtyard on one of two 20m-high slides. They will carry a bean plant, to be analysed by a laboratory at the bottom. The project continues in the basement, where a pair of cinemas will screen comedy and horror clips. Air from both rooms will be pumped to the palace façade, where large wisteria vines will grow over the summer.

A note on the Strozzi website stipulates that the minimum age to participate will be 6 years old, with under-14s requiring a waiver signed by an accompanying adult. Visitors must also be between 1.3m (4' 3") and 1.95m (6' 4") tall and weigh no more than 120kg (18 stone and 12lbs) to try out the slides.

The aim, Galansino says, is to test how the plants respond to human emotions. The idea, inspired by Mancuso’s theories of plant intelligence, is based on long-standing radical research. “Darwin made incredible discoveries about the intelligence of plants, but he never published them,” Galansino says. “He considered it less controversial to say that men had come from monkeys.”

Höller, a trained agricultural entomologist, is also channelling something of the city’s Renaissance spirit. “We were talking about how Florence was also a very important scientific centre, where revolutions were started by Galileo Galilei and Leonardo da Vinci,” Galansino says. “We can’t compare ourselves to this genius, but at least we are trying to put Florence on the map of creativity today.”