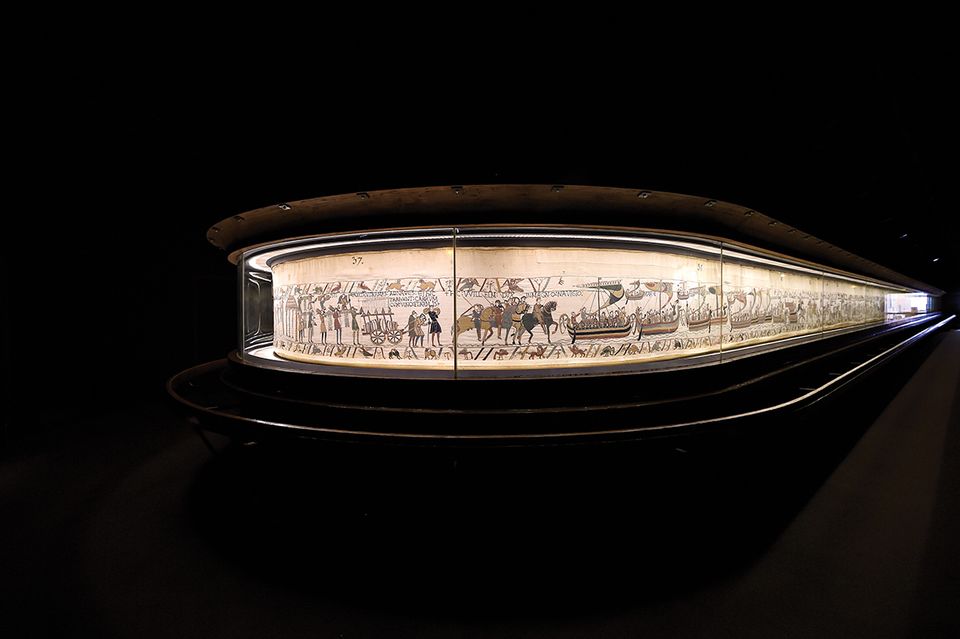 The Normandy museum will be refurbished while the Bayeux Tapestry is in the UK S.Maurice/Bayeux Museum

The Bayeux Tapestry was probably made in England, soon after the Norman Conquest in 1066, but it has not returned since it was taken to France. In January, the French president, Emmanuel Macron, announced that France is willing to lend it for display in Britain during the refurbishment of the Bayeux Museum, on the Normandy coast. Although the work will almost certainly be shown at the British Museum, Macron’s announcement has already sparked rival bids to exhibit the work. These have come from Historic Royal Palaces, which is proposing the Tower of London, and English Heritage, which runs the battlefield visitor centre near Hastings.

An earlier British effort to borrow the Tapestry, in 1966, also sparked competing bids to host the display from the Victoria and Albert Museum (V&A) and Westminster Abbey. We delved into the National Archives to investigate this and a previous attempt, in 1953, to secure a loan of the historic work.

The first loan attempt was in 1953, to mark the coronation of Elizabeth II, with the request coming from the V&A. The French authorities agreed to the loan and the UK’s ministry of education, then responsible for culture, “confidently expected” that the six-month display in London would proceed. A Metropolitan Police file reveals how the historic treasure was to be protected.

The work would come by sea from Normandy, arriving at Southampton docks. A police document records concerns “in certain quarters of France” about the Tapestry being lent, so reassurances were needed that it would be “securely guarded”. Although British police were then rarely armed, two officers with guns would travel from the port to the V&A, one with the driver and the other at the back of the vehicle, accompanied by a motorcycle escort. The police admitted that motorcyclists would “not have a lot of security value”, but the V&A director, Leigh Ashton, wanted their presence to reassure the French.

The police were informed on 9 September 1953, the month of the scheduled opening, that the French authorities had “reversed” their decision to lend, partly because of conservation concerns.

For 1966, to mark the 900th anniversary of the Battle of Hastings, there was a second attempt to bring the Bayeux Tapestry to Britain. The Arts Council agreed to fund the costs and the V&A offered to host the display.

Westminster Abbey then entered the fray, asking to borrow the work. In April 1965, the abbey’s sacrist, Christopher Hildyard, had visited Bayeux and been told by the local ecclesiastical and municipal authorities that they would be open to lending. Bayeux was also involved in discussions over “putting the Tapestry on display in the USA” but no further details on this are recorded.

The Westminster Abbey archives reveal where the work would have been displayed. The Chapter House would be “an ideal setting”, although the Henry VII Chapel was “another obvious possibility”. However, the V&A, which had large spaces and better environmental and security conditions, would have been much more suitable for housing the fragile 70-metre-long textile.

The loan venture was led in France by the Prince de Broglie, an aristocrat and government minister responsible for Algeria. Although his official position might not suggest an interest in the Bayeux Tapestry, he was also president of a committee to celebrate the Norman conquest of England.

The British embassy in Paris reported back to the Foreign Office in London that the French culture minister, the distinguished novelist André Malraux, had “offered us the tapestry”. But the municipality of Bayeux was resisting the central government and had “disowned” the offer.

The embassy discussed the pros and cons of pursuing the loan. It “would attract British tourists to London, and perhaps some foreign [ones]” and there would also be “some advantage to historians and art experts, though the Tapestry has probably been well studied”.

But “in the context of Anglo-French relations”, the embassy felt the disadvantages outweighed the advantages, since “we would have to bear full responsibility for all the consequences of moving the tapestry and any damage or discolouration”. The British would have to put up “all the money to move it from Bayeux and return it” and Bayeux might also ask for “compensation” for loss of tourism income or a “quid pro quo”.

The Foreign Office agreed with the embassy, saying the idea should be dropped, because of opposition from Bayeux and France’s Inspecteur Général des Monuments Historique. Malraux had said privately that he would be willing to overrule “either the municipality, or his experts, but not both”. British officials also warned that, even if the loan was agreed, “the risk of disaster would still remain”.

Although the 1953 and 1966 loan requests floundered, the situation is very different today. Both the Musée de la Tapisserie de Bayeux and president Macron are behind the proposal. The preliminary assessment of conservators suggests that the work can be safely transported, although a full study will need to be completed. If the Bayeux museum is to be renovated, then the work will need to be moved. The British Museum, which is virtually certain to be the venue in the UK, has the very best environmental conditions.

A Stich in Time: the history of the Bayeux Tapestry

The Bayeux Tapestry is actually an embroidery, 70 metres long and 50 centimetres high. Created in the 1070s, the nine panels with 58 scenes depict events leading up to the Norman Conquest of England after the Battle of Hastings in 1066. The Tapestry was probably commissioned by Bishop Odo, the half-brother of William the Conqueror, the Duke of Normandy.

By the 15th century, the Tapestry was at Bayeux Cathedral. Following the French Revolution it was confiscated by the state and initially it was to have been used as ordinary cloth to cover military vehicles. Fortunately it was quickly rescued and handed over to the municipality. In 1804, the work was moved to Paris for display, but after Napoleon abandoned his idea of invading England, its propaganda value was lost. The work was returned to Bayeux, where it went on display.

During the Second World War, the Nazi occupiers of France wanted to take the Tapestry to Berlin, but it was saved and returned to Bayeux in 1945. A new museum for the piece was opened in 1983. Its building now requires renovations, which has resulted in the offer to lend the treasure to England.