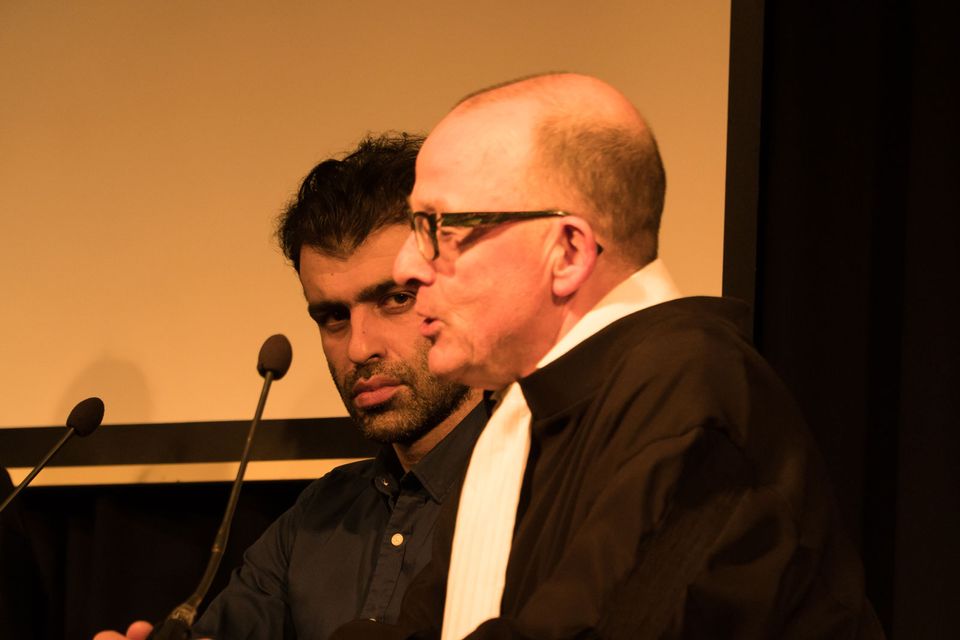 Dutch asylum court is not exactly a well-trodden topic within performance art, but last week in Amsterdam, a one-off staging of a refugee trial asked the public to determine the fate of an actual case. The piece asked questions about the role of performance in analysing complex social and legal issues, and with it how visual artists are using performance to platform issues often left hidden.

Staged on 26 November at the cultural centre Pakhuis de Zwijger in the eastern docklands of Amsterdam, Refugee on Trial: Afghan Journalist Ali J vs. Netherlands re-enacted an actual asylum application from 2017. The artist Ehsan Fardjadniya himself plays the role of refugee Ali J; the other roles are taken by current and former asylum lawyers and a former judge.

The Taliban knew I was helping the New York Times and the BBC, and because of this they tried to kill me at a market in Khanadar Asylum seeker, Ali J

Opening the performance, Ali J described the moment he knew he had to flee the Taliban: “I fled because of my work as a journalist; the Taliban knew I was helping the New York Times and the BBC, and because of this they tried to kill me at a market in Khanadar.”

Over the 90-minute piece, Ali J is cross-examined by Frans Willem Verbaas, a lawyer from the Dutch Immigration and Naturalisation Service (IND), who called Ali J a “fixer” and a “chauffeur and not an actual journalist”.

During cross-examination, Ali J said he helped arrange stories and interviews for foreign correspondents, but that he had to leave his press card as he was fleeing, a claim the IND’s lawyer refuted, calling it “unbelievable”.

According to Mohsen Jafari, a lawyer and researcher with the Amsterdam-based NGO Boost, which provides free legal services to refugees, the issue of Afghan asylum seekers is complicated and deteriorating quickly. “In 2017, Afghans were reclassified under Dutch asylum law as coming from a safe country,” Jafari said after the performance.

Commenting on the rise anti-immigrant sentiment across the European Union, Fardjadniya said he wanted to develop the work as a “public performance” to draw attention to deteriorating migration policies all across Europe, not just in the Netherlands.

“With the discourse around Brexit, and the general anti-migrant consensus being promoted by far-right parties across continental Europe, I wanted to use the language of performance to develop a piece outside a typical performance, looking at the issue of migration as a tribunal would.”

Towards the end of the performance, the audience was asked to vote on Ali J’s asylum application: 70% voted to give Ali J asylum; 30% declined.

In the end, the piece prompted more questions than answers. Was it merely performance mimicking social engagement for the already converted? Or could it possibly signal a disposition towards a more widespread turn in performance? One grounded not in the format of the museum of theatre but instead grounded in the tribunal—the tribunalisation of performance?