How the artist Robert Rauschenberg got his goat

When the US artist and animal lover Robert Rauschenberg (1925-2008) saw a stuffed Angora goat in the window of a junk shop near his New York studio in 1955, he knew he had to have it. The shopkeeper wanted $35 for it, Rauschenberg paid $15 on account and, when Calvin Tomkins’s biography of the artist was published in 1980, he had yet to return to pay off the balance. The animal is a key component of his work Monogram (1955-59): a goat, standing on a painting, with a painted face and a rubber tyre around its middle.

When the Tate was planning its sweeping survey on Rauschenberg, Monogram was high up on its wish list. “We knew it had to be there,” says Achim Borchardt-Hume, the director of exhibitions at London’s Tate Modern, where the show opens on 1 December and then travels to New York’s Museum of Modern Art (MoMA), which is co-organising the show, and finally to the San Francisco Museum of Modern Art. But Monogram is fragile and so rarely leaves Stockholm’s Moderna Museet, which presented a potential snag in the Tate’s plan. Before Swedish conservators would give it permission to travel, the piece was subjected to a series of non-invasive scientific tests to assess its condition and learn more about its technical composition.

Traces of arsenic The conservators My Bundgaard and Thérèse Lilliegren from the Moderna Museet were well aware of the stories and rumours surrounding Monogram and its component pieces, including that it was damaged many years ago when someone in the museum world sat on it for a photo opportunity. “Because of the work’s fragile construction and these stories we felt a need to investigate and make a thorough condition check prior to agreeing to the loan request,” Bundgaard says. They used digital radiography and X-ray fluorescence, and performed microfading tests to learn about its internal structure and about Rauschenberg’s choice of materials. A research project into his pigments and binders is ongoing.

The tests revealed that the goat contains traces of arsenic, “which is toxic and not uncommon to find in natural history collections as a protective measure against insect and other pests,” Bundgaard says, adding that the discovery will affect safety procedures. In fact, the fear of pests reportedly is the reason that MoMA’s former director, Alfred Barr, declined collector Robert Scull’s offer to acquire the work for the New York museum in the 1960s. In 1964, it was snapped up for the Moderna Museet by its then director Pontus Hultén, which Borchardt-Hume describes as a “keen advocate of American art”. 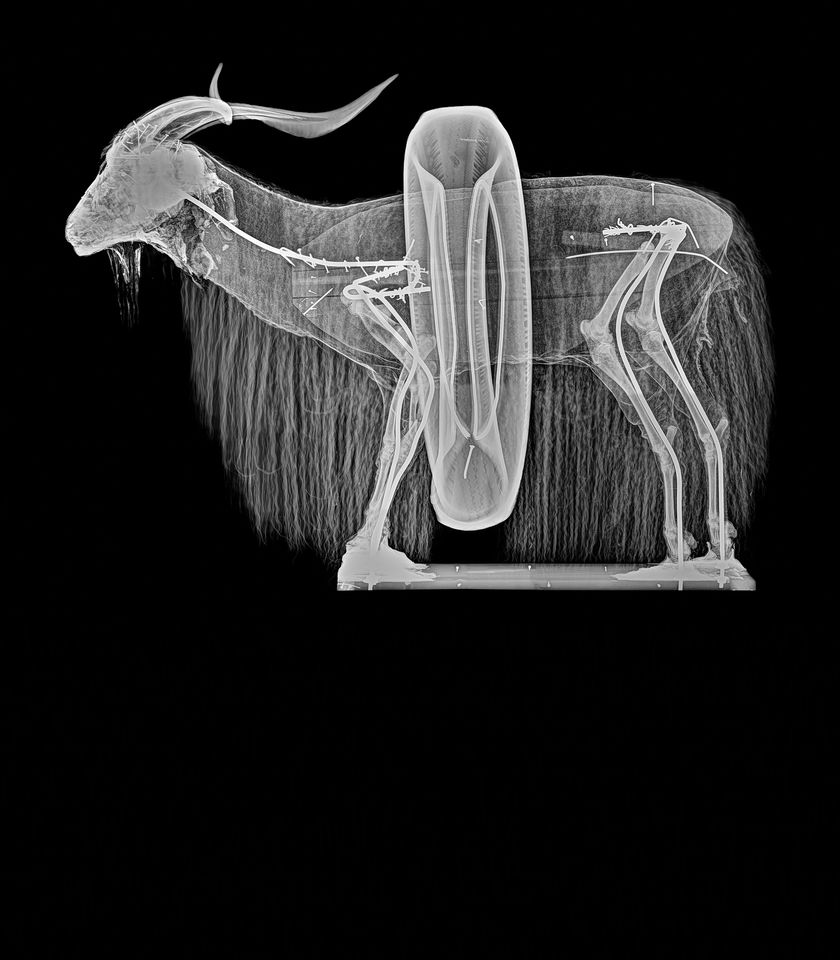 X-rays show that the goat has a fractured leg, but that its internal structure is sound (Image: Asa Lundén; courtesy of Moderna Museet/Stockholm)

X-rays also confirmed rumours that the goat’s leg is fractured, but that an iron structure holds it in position and so the break poses no risk to the stability of the work. The conservators also note that although the rubber tire around the goat’s middle is heavy and “puts a lot of pressure” on its internal structure, overall its “inner construction is fairly stable” and therefore is safe to travel in a newly built transport crate that “supports the goat and protects [it] against shock and vibration hazards”. However, they stress that it is still a very fragile work “and travel will always be limited and subject to consideration”.

Bundgaard and Lilliegren say that Monogram has not undergone a major conservation treatment while in Stockholm, but that “a common practice in the past has been to comb the goat’s hair and wash it with shampoo when it [became] tangled”. According to Tomkins’s biography, when the artist first bought the goat he spent hours using dog shampoo to remove decades of dust from its matted fur.

Rauschenberg refined the composition over four years. “He spent a long time wrestling with it,” Borchardt-Hume says. The Tate exhibition includes drawings and photographs that illustrate Monogram’s different stages. It was time well spent, says Borchardt-Hume, who describes it as “a truly spellbinding work” that you are unlikely to soon forget once you experience it. “It’s hard to resist the charm of the goat.”