How the Cranachs made Luther unmistakable: Joachim Whaley on the Luther Decade

The best place to start with the Luther Decade is probably Weimar. The simply-named exhibition Cranach in Weimar is in the Stiftung Weimarer Klassik’s Schiller Museum (until 14 June), but visitors are advised to visit the nearby church of St. Peter and Paul first. Known as the Herderkirche (Johann Gottfried Herder was the pastor of Weimar and the head of the Lutheran church in the duchy from 1776-1803), it contains a highly important altarpiece, installed in 1555 and newly renovated. 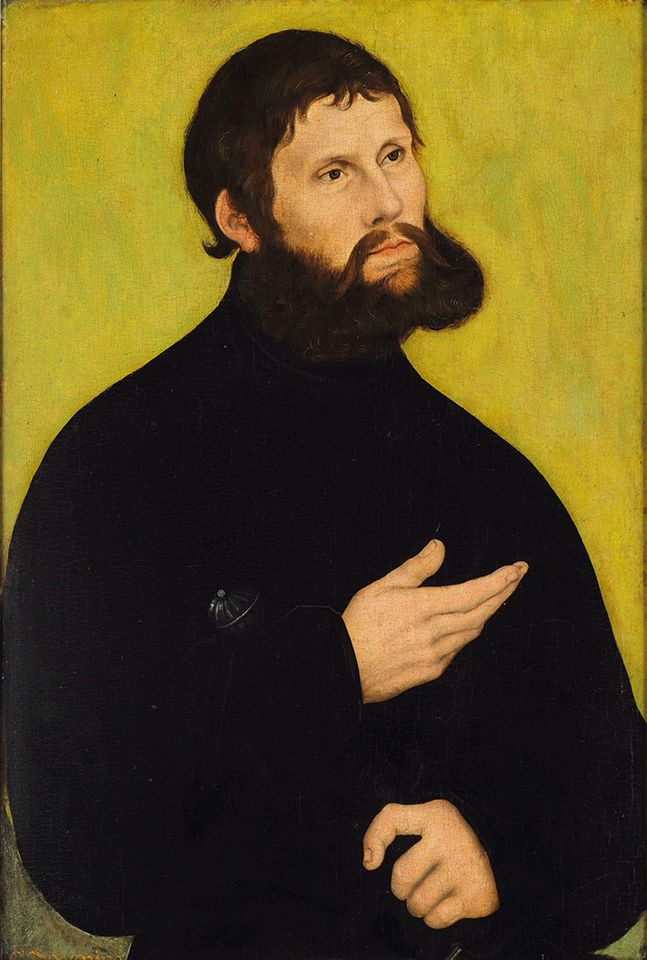 Originally thought to be the work of the elder Cranach finished off by his son, it is now recognised as the work of the son alone. It manages to encapsulate the entire programme of the Cranach workshop since its inception. The panels to the left and right depict Frederick the Wise, his family and successors. In the centre the figure of Christ on the Cross, the centre of a typical Gesetz und Gnade (law and grace) picture—with the condemnation of Catholic sinners on the left and the glorification of the virtuous Protestants on the right. The figures on the right are perhaps surprising but obviously important to the Cranachs: first St. John the Baptist, then Cranach the Elder, then Luther showing his printed Bible to the viewer. Any doubt about who was most important is dispelled by the stream of blood that flows from Christ’s side and lands on Cranach the Elder’s head.

The exhibition presents a marvellous survey of broad themes. Pictures and documents trace Cranach’s progression from Wittenberg via Augsburg to Weimar. The genesis and development of the law and grace motif is demonstrated. The changing image of Luther himself is illuminated in a series of prints and paintings. “Cranach’s princes” and his portraits of them are introduced. Sections are devoted to work produced for the court and to Cranach’s paintings of both male and female nudes.

Finally, the disaster of Duke Johann’s career is illustrated with Cranach the Elder’s portraits of the young duke and his beautiful wife Sibylle of Cleves and then the 1548 portrait by Titian (on loan from the Prado) of the defeated duke, the left side of his face clearly marked by the wound he had received at the battle of Mühlberg the previous year. 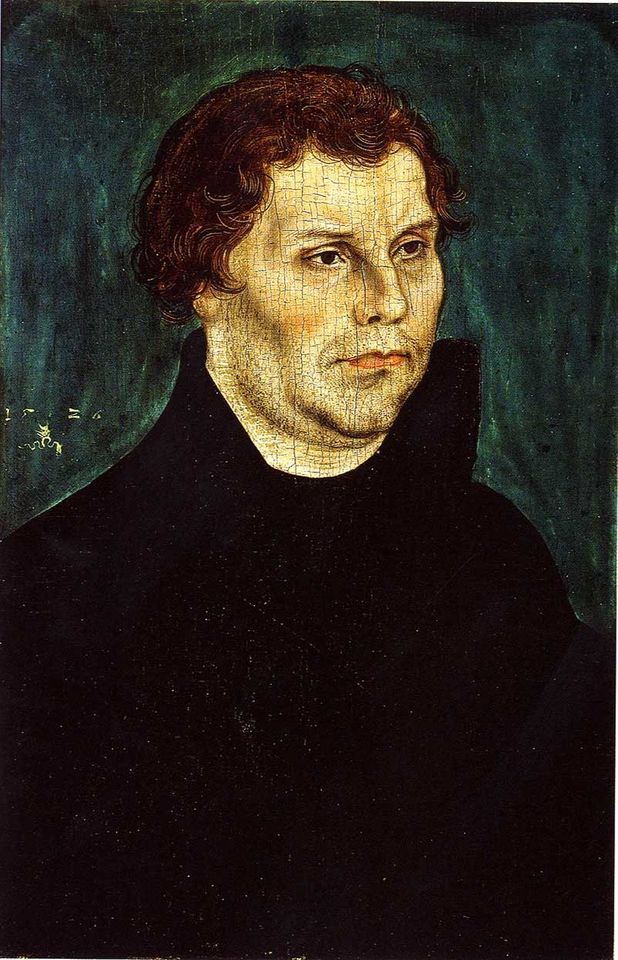 A distinctive feature of the Weimar exhibition is its interest in the reception of Cranach’s work from the 18th to the 20th centuries. Cranach was highly valued throughout the early modern period but he was fully rediscovered in the later 18th century. Goethe, himself a descendent of Cranach, collected drawings by him which are displayed here. In the early 19th century, on the occasion of the tercentenary of the Reformation in 1817, the newly created Grand Duchy of Weimar remembered the role that its forebears played and memorialised Luther as a national figure using Cranach’s images.

In the 20th century, we find more diverse resonances, some extremely surprising. A fascinating section of the show documents the use of Cranach images in the Bauhaus school founded in Weimar in 1919. Lyonel Feininger (1871-1956) regarded his encounter with German painting of the Cranach period as the key event in his artistic life. Cranach’s pictures were used repeatedly in drawing exercises and the Bauhaus dedication to the art of the woodcut was directly inspired by the work of the Cranach school.

Roughly 80 kilometres west of Weimar, the stunning Wartburg castle houses the show The Luther Portraits for the Cranach Workshop (until 19 July). The location could not be more perfect. This fortress, dramatically watching over the town of Eisenach from a 410-metre precipice, was the place where Frederick the Wise hid Luther between May 1521 and March 1522 following Luther’s excommunication by Leo X and Charles V’s Edict of Worms that declared Luther an outlaw in the Holy Roman Empire. It was here that Luther, under the assumed name of “Junker Jörg” (Lord George), undertook his translation of the New Testament, which almost immediately became one of the key texts of the evangelical movement. 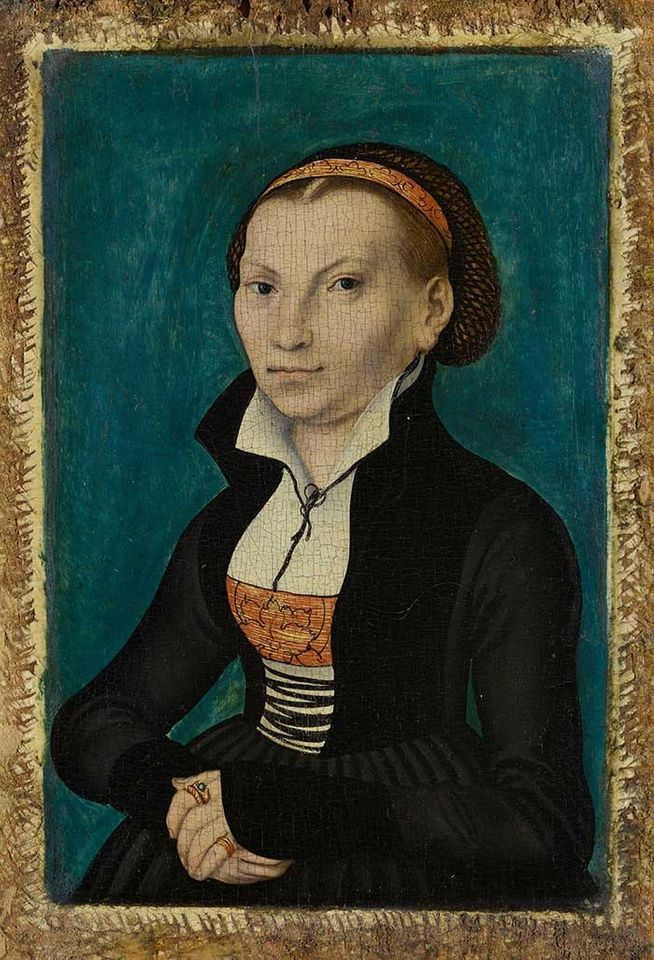 The castle rooms are devoted to a full study of the Cranachs’ Luther portraits and their reception since the 16th century. The Cranachs held a monopoly on the image of Luther and developed a technique of quality control in the production of images. A trace outline of Luther’s face marked with ink was impressed onto picture after picture to ensure that the image remained constant.

The aim was not just to streamline the product. The Cranachs wanted to ensure that Luther was unmistakable. Above all they wanted to ensure that the message was accurate. The portraits and the innumerable woodcuts and prints were inspired at all times by image management and brand control. They were also marvellous naturalistic portraits of the man himself.

The exhibition follows the accepted chronology of portrait types. Cranach the Elder first produced a print of Luther as an Augustinian monk in 1520: a serious-minded, sensitive young man. The second image shows him wearing his doctor’s hat. The third depicts him in disguise as Junker Jörg. This image of Luther without scholarly or ecclesiastical dress serves as the transition to marvellous portraits of Luther and his wife: images of an ordinary couple, suffused with a quiet dignity, designed to scotch Catholic rumours that a dissolute Luther had married an outrageous monstrous harlot. 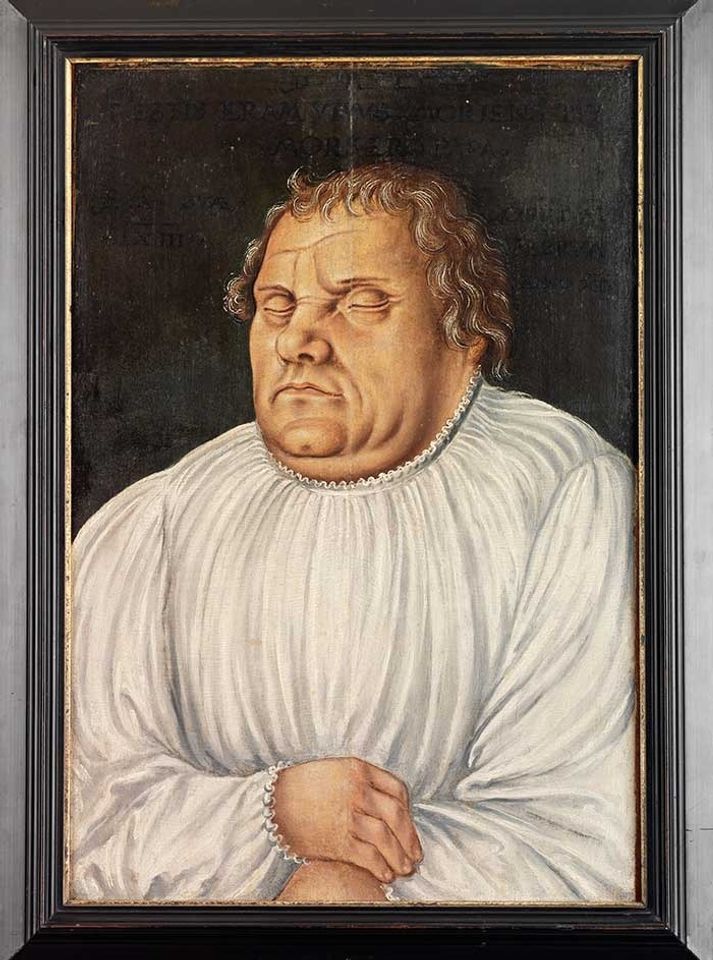 Portrait of dead Luther (1546) from the Cranach workshop

By the late 1520s Luther had become the church father, and his image at this stage served as the archetype for the portraits of other reformers such as Philip Melanchthon. Characteristic of these pictures is the wearing of the biretta, a symbol of ecclesiastical authority. The older Luther was more often than not portrayed with a bare head as a professor in plain academic dress enhanced by a fur collar. The final image is that of Luther on his deathbed, based on a first sketch by an unknown artist who was summoned to the castle on the morning of 18 February 1546 just hours after Luther died. It was not long before this sketch had been transformed into paint and print by the Cranachs and their workshop.

The exhibition richly illustrates the techniques used to reproduce Luther’s image and the speed with which they were translated from one medium into another and marketed. The Cranachs never failed to respond to a political or commercial opportunity.

This show too ends with a brief section devoted to reception. In terms of quality, apart from studies by Ernst Barlach (1870-1938) and Lovis Corinth (1858-1925), things go sharply downhill from here. The final object is one of the 800 plastic, brightly coloured, metre-high Luther “dwarves”, Here I Stand (2010) by Ottmar Hörl. The face is clearly based on Cranach the Younger’s image of the old Luther. But that is the only thing that links Hörl with Cranach.

Joachim Whaley is Professor of German History and Thought at the University of Cambridge and a Fellow of Gonville and Caius College. He is the author of Germany and the Holy Roman Empire 1493-1806, two volumes (2012).