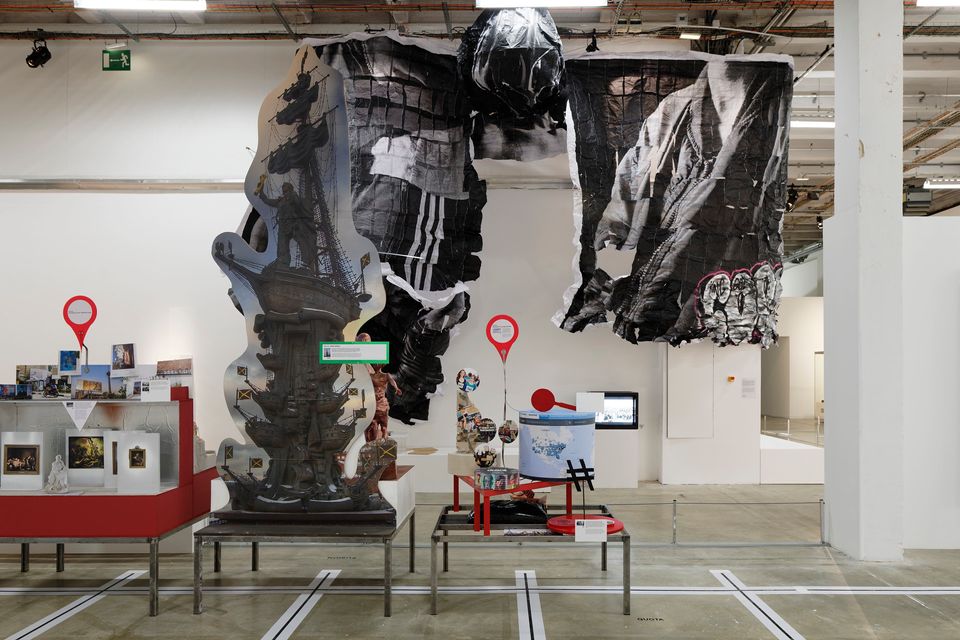 An image of the US artist Parker Bright protesting in front of Dana Schutz’s painting Open Casket (2016) was removed from an exhibition of works by French artist Neil Beloufa after Bright wrote online that “my voice does not matter in this case [Beloufa’s piece]; I am being used as raw material.”

The piece formed part of Beloufa’s project L’ennemi de mon ennemi at the Palais de Tokyo in Paris (until 13 May); according to ARTnews, the work in question was withdrawn from Beloufa’s show last week (16 February). The exhibition curator, Guillaume Désanges, tells us that “it was clear from the beginning of the project[that we would] take out images that authors would claim. It was part ofthe project.”

Beloufa’s piece comprises documents, images, artefacts and reproductions; an appropriated image of Bright with the Schutz painting was painted on a mirror incorporated in L’ennemi de mon ennemi. The image shows Bright protesting the work Open Casket (2016), a painting of the body of Emmett Till, the 14-year-old African-American murdered in 1955 by two white men in Mississippi. Bright stood in front of the work while it was on display at last year’s Whitney Biennial, wearing a T-shirt emblazoned with the words “Black Death Spectacle”. The piece raised a storm of controversy, touching on issues such as the ethics of representation.

I'm just soooooo tired!!!!! How many times will images of me be used by white/*non Black (Beloufa is French-Algerian) artists for fine art or for products???? Like I'm so done....I almost wanna give up making and putting myself out there. Literally using my likeness for your "powerful" work, like u didn't do anything but put me on a mirror ???? FUCK U PAY ME @beloufastandfurious is this for sale?

“I would like to stage another protest inside the Palais De Tokyo in Paris where Beloufa's piece is on display because I believe that Beloufa is appropriating my narrative without consent,” writes Bright on his Gofundme crowdfunding page. He has so far raised $2,691—against a target of $1,500—enabling him to travel to Paris where he intends to speak to Beloufa and Désanges. “This is a form of defamation of me as an artist and arts activist,” adds Bright.

According to ARTnews, Désanges and Beloufa have since apologised to Bright. They say that the mirror piece depicting the artist was one of several images “reproduced mostly without permission”, adding that Bright’s image “was not an artwork”.

Désanges tells The Art Newspaper: “If we take responsibility for theimages that are shown, we have to take responsibility for the consequences [of exhibiting those images]. Besides, the failure of representation is one of the issues tackled by the project. The project is not a work of art, it is a device displaying an accumulation of images, facts, events from all parts of the world, which were reproduced by the artist; they are associated through a mobile scenographic device.”

Bright says however that he is seeking a public apology from Palais de Tokyo officials. A spokeswoman for the contemporary art institution says: “Beloufa always had the idea of removing the reproductions presented in the exhibition, depending on the reactions incited. This is the main principle behind the project. Exhibited or removed from the exhibition, the reproductions of Beloufa say something extremely powerful about our vision of the world, and our relationship to images and art. It is a complex and fascinating exhibition.”