The intimate mood of this year’s Parcours at Art Basel is an indirect reaction to a summer of “massive art presentations”, says Samuel Leuenberger, who has organised the fair’s site-specific sector around the Münsterplatz for the second time. In his day job, the Basel-born curator runs the project space Salts in nearby Birsfelden. In a year marked by the once-a-decade convergence of the Venice Biennale, Documenta and Skulptur Projekte Münster, Leuenberger’s selection of 22 works “really boils down to the artists’ individual observations and poignant storytelling”. He talks us through six highlights popping up in hidden spaces and on the streets of Basel. 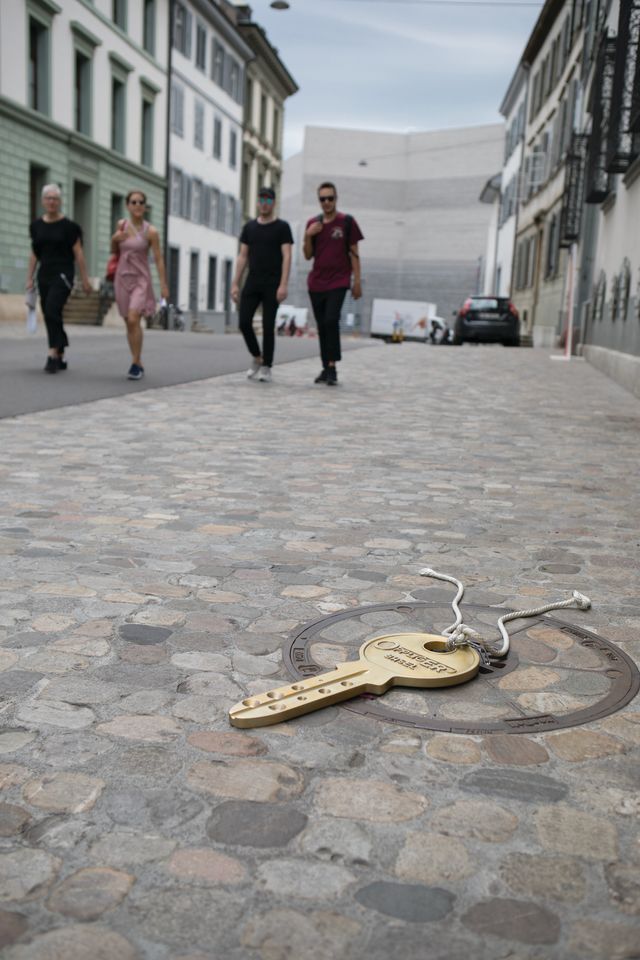 Various locations throughout the Parcours area

“I’ve been a big fan of Amanda Ross-Ho’s work for a long time. She makes large-scale sculptural interpretations of everyday objects, like gloves and trousers. In this vein, she’s made a keychain based on her own Carabiner keychain and a bunch of keys that seem to have fallen off and are lost throughout the streets of Basel. They’re large—maybe 60cm long. You might find one down by the river, up the stairway on the other side of the road, in a private garden. We partnered with people from the Parcours area and asked if they would give the artist a copy of their key. It makes a nice meta-portrait of the local community.” “Wu Tsang came for a site visit and we came across the covered windows of the Club de Bâle. It’s a private members’ club, which sparked a whole range of interests in Wu Tsang. She’s very interested in the underground club scene and has made various films in clubs in Los Angeles. The Parcours installation will be in the library and smoking room. It’s a story told through a film and  sound installation that relates to an ongoing collaboration with the poet and theorist Fred Moten. The room is like a portal, a gateway to a series of events in an undisclosed location. They will culminate in a performance on Parcours Night, an ensemble that she’s put together with the performance artist boychild and the musicians Patrick Belaga, Bendik Giske and Josh Johnson.” 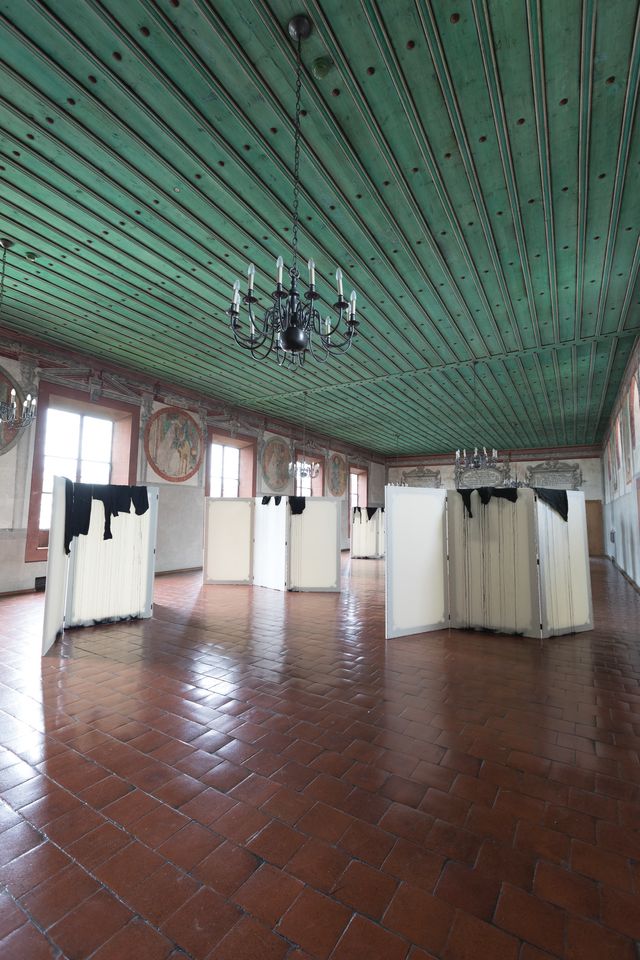 “We were able to secure a beautiful space that has never been seen in Parcours: the Münstersaal. It used to be a council meeting room next to the Münsterkirche and is usually not seen by the public. Latifa Echakhch’s installation consists of nine paravents that are stretched with unprimed canvas. Over these canvases, which are the height of the artist herself, she has thrown her clothing, which she dipped in black ink [that] is dripping down the screens. It becomes a sort of labyrinth, with ghost-like human traces. The church symbolises a place for refuge, for the needy, and one could read into the work the many people who have lost their clothing while migrating from one place to another. The paravents can be partly read as borders.” “The Natural History Museum is a protected building and this room is filled with opulent furniture and 102 portraits of male scientists, who founded and taught at the University of Basel. They range from the 1750s to 1860s. The absence of women was so remarkable that Sophie Nys, who does a lot of artist’s publications, made a fanzine about 102 female scientists who all worked at the same time. It’s going to have a spotlight on it and can be picked up and taken away. Every page has a short text about who this scientist was and what she was working on, almost like a listing. There’s minimal design, but a lot of integrity and sensitivity in the way she does it. Sophie Nys is the only artist who has two works in Parcours.” Rirkrit Tiravanija, untitled 2007 (stories are propaganda so pay a penny for the royalties and sing a prologue to history if the mass is against the classes the girls will be god the only free choice is refusal to pay choking on the billboards philosophy in the boudoir the days of this society is numbered) (2007), Neugerriemschneider (Photo: David Owens)

Rirkrit Tiravanija, Neugerriemschneider  untitled 2007 (stories are propaganda so pay a penny for the royalties and sing a prologue to history if the mass is against the classes the girls will be god the only free choice is refusal to pay choking on the billboards philosophy in the boudoir the days of this society is numbered) (2007)

“We’re showing an older piece by Rirkrit Tiravanija on the terrace of the old university. It goes back to his political interest in demonstrations and how signs are used to communicate one’s concerns. The title is a sentence that is displayed on a neon light structure, which shines outwards from the Parcours grounds and over the river. So people driving and walking over the Mittlere Brücke [middle bridge] will see the text, which is an amalgam of phrases from previous generations’ protests against war and from the French Situationist Guy Debord. It’s lit up like an advertising board, so he mixes this support structure with a much more [critical] outlook on where our society’s heading.” 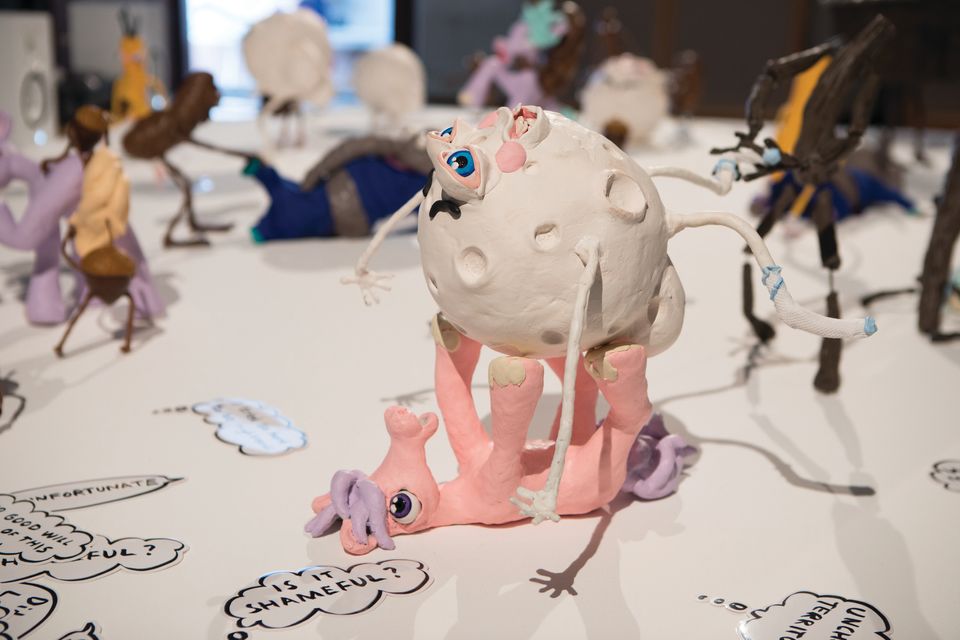 Natalie Djurberg and Hans Berg, Who am I to Judge, or, It Must Be Something Delicious (2017) Gió Marconi, Lisson Gallery (Photo: David Owens)

Gió Marconi, Lisson Gallery  Who am I to Judge, or, It Must be Something Delicious (2017)

“The Swedish duo are making a multimedia installation of stop-motion animation and a floor installation of objects and figures in a classroom in the oldest school in Basel. Some of the works are coming from their [recent] show at Lisson Gallery [in London], but they’ve also added some earlier films. They did an installation a year before, sort of a good version of this series of characters. This is a darker version. It’s about desire or desire not being fulfilled—themes they thought would be interesting to put in the context of a school. It’s a manifestation of the lust and fears that young men and women go through at that age.”