These six works provide a taster of PAD’s tenth anniversary offerings, from Modern and decorative art to tribal art, antiquities and design

There is a photograph of the Danish designer Finn Juhl lounging sideways across this chair, his legs casually slung over the arm. For the dealer Stanislas Gokelaere, it epitomises Juhl’s “playful approach to design, his rupture from classical Danish design” and the influence of Modern artists such as Barbara Hepworth, Joan Miró and Henry Moore. It is also inspired by the forms of African tribal weapons; the story goes that after King Frederik IX sat in the chair at the Cabinetmaker’s Guild exhibition in 1949, a journalist suggested that Juhl call it the King’s Chair, but he countered with the Chieftain’s Chair. In 2013, an example sold at Phillips for £422,500, but this one is on the market for the first time. 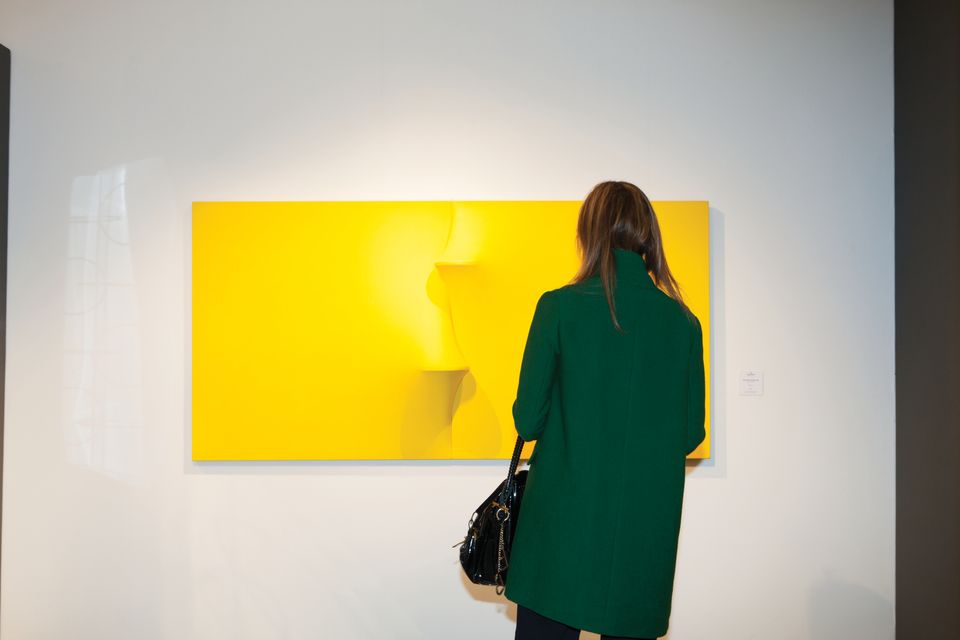 When it comes to paintings, post-war Italian art is arguably PAD’s strongest suit. The highlight on Mazzoleni’s stand is an unusually large work by Agostino Bonalumi from the 1960s, which, says the gallery’s managing director, Mira Dimitrova, was his “formative decade and the most desirable period of his work”. Bonalumi focused on monochromatic pieces throughout his career, and started making these “estroflessione” or “picture objects” in 1959, building structures to push through from the back of the canvas. The abbraccio (hug) shape seen here is a form the artist returned to throughout his career. 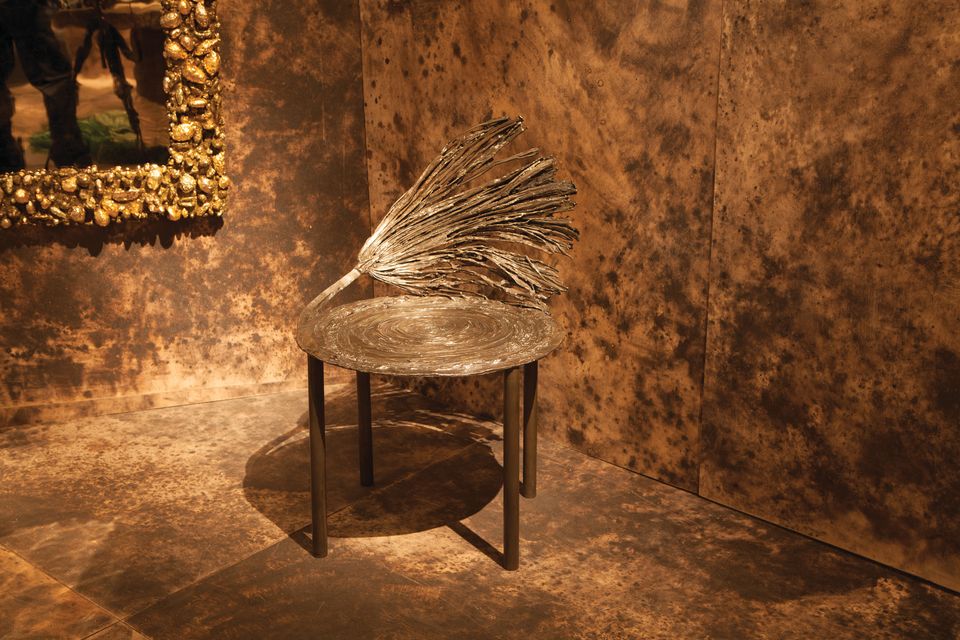 David Gill’s stand is an ode to the polished, organic forms of the US designer Michele Oka Doner, who has given a surreal twist to the natural world throughout her four-decade career. Although some of the works, such as the Pollinator/Bee sconces, were commissioned for PAD, others date back to the early 1990s. Chairs are central to Oka Doner’s work, from her spiteful Thorn Chairs to functional designs such as this unique piece, the second of two Palm chairs. Most of the chairs are now in private or public collections, but the designer kept this example, which is now on show for the first time. 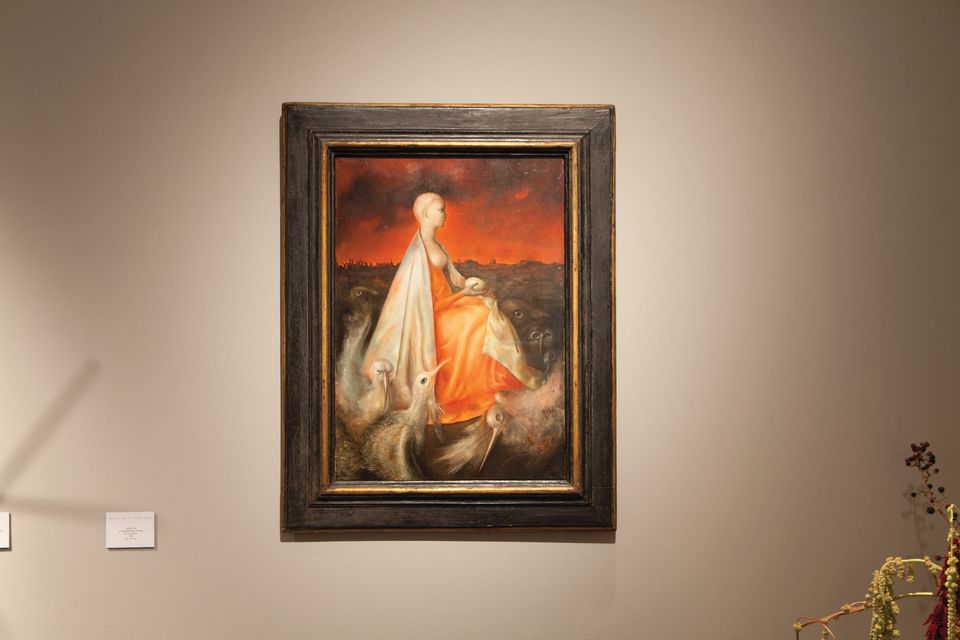 This is one of a series of four mythological paintings by Leonor Fini of women in a desolate landscape, holding an egg in each of the alchemical colours. Born in Argentina, the self-taught artist was raised in Italy, and the peculiarities of Italian mannerisms had an enduring influence on her work. In 1930s Paris, Fini became friends with the Surrealists but resisted formally joining the movement. The New York-based gallerist Julien Levy described the artist as possessing “the grace of an angel and the discourse of the devil”, as encapsulated in this eerie scene of hellish black and red tones, teeming with phoenixes and other strange birds. 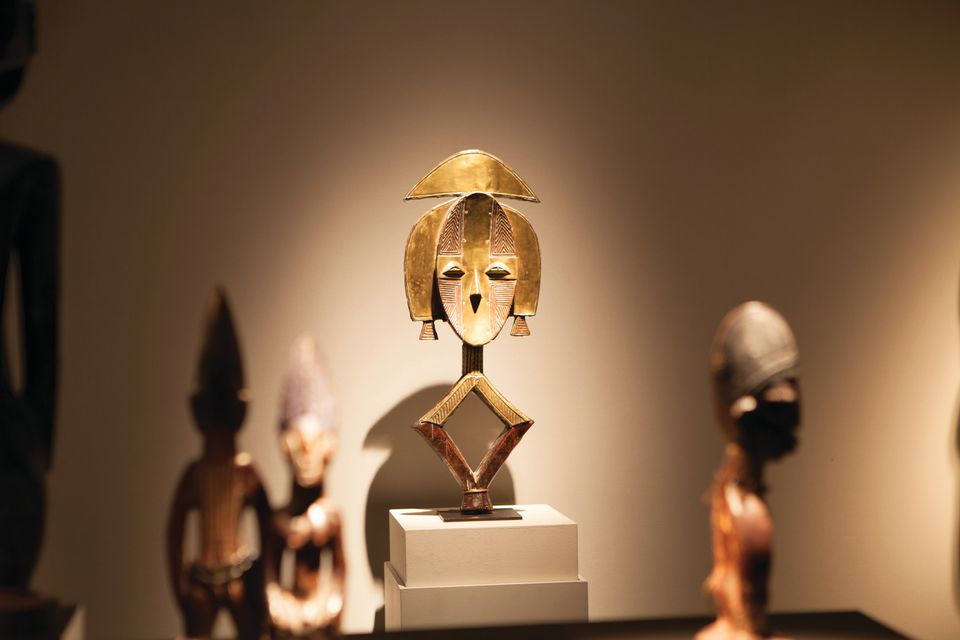 The worship of ancestors was particularly important to the Kota people of Gabon, and these effigies, known as mbulu ngulu, were idolised as “wooden souls”. Lucas Ratton describes this ancestral figure as a “great classic of Kota art”, marked out by its refined carving work and the “harmony between the top of the sculpture and its geometric lozenge-shaped base”. Its strongly concave face is decorated with strips of copper and brass, and the dotted patterns around the neck may represent ritual scarifications. Fortunately, the wooden base, so often eaten away by insects, remains intact. The US artist Alexander Calder started making jewellery at an early age for his sister’s dolls and produced around 2,200 pieces in his lifetime, many of them made as gifts. Not for wallflowers, his substantial, sculptural pieces were worn by Mary Rockefeller and Peggy Guggenheim. In 1945, Georgia O’Keeffe was photographed wearing a brooch by Calder, albeit a different one to this large brass-and-steel-wire concoction, which, as with all of Calder’s pieces, is unique. It is one of several pieces at PAD from Louisa Guinness Gallery’s current exhibition, The Boldness of Calder (until 5 November), devoted to the artist’s jewellery.