Part of the New Portraits series, the work at the centre of the case was shown—and sold—at Frieze New York last year

Richard Prince is in legal hot water yet again. The artist and his former dealer Gagosian Gallery have been sued by a California-based makeup artist and model over a work from his latest series. Ashley Salazar filed her lawsuit in June after she discovered that Prince had appropriated a mirror selfie decorated with cat memes from her Instagram account. The case is potentially made more complicated by the fact that Prince is no longer represented by Gagosian, his dealer of more than a decade. 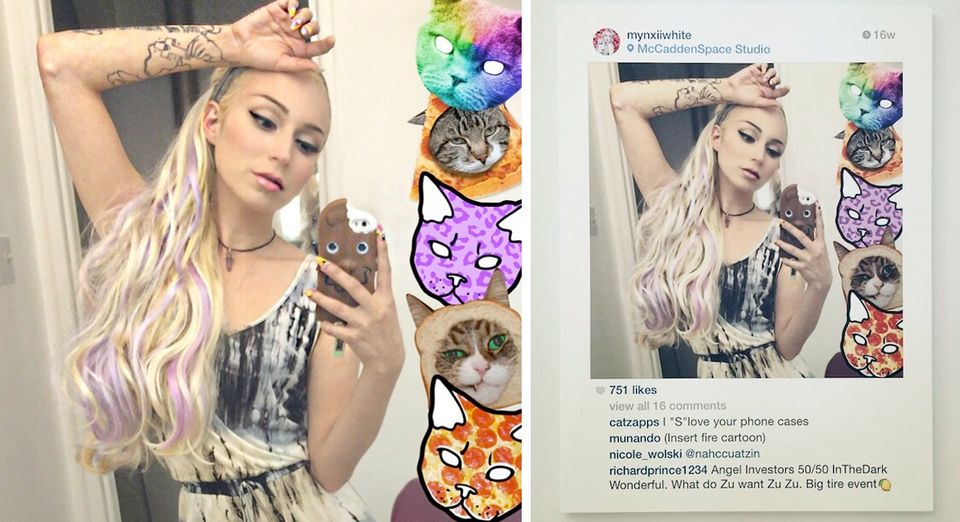 The suit, which had gone unnoticed until now, is the fourth copyright infringement claim filed against the artist in recent years. In the first case, Prince lost a lawsuit brought by the photographer Patrick Cariou over his Canal Zone series in 2011—but was later vindicated when that ruling was largely overturned on appeal in 2013. Prince’s more recent New Portraits series, which debuted at Gagosian’s Madison Avenue gallery in 2014, made him the target of two more lawsuits brought by photographers who claim that the artist stole and unfairly profited from their work.

Unlike the plaintiffs in the previous cases, Salazar—who posts to Instagram under the name @mynxiiwhite—is not a professional photographer. According to her website, she is a makeup artist who has toured with Kanye West and Kelly Clarkson as well as a model who has appeared on the cover of Elle Japan and Vogue Italia.

Salazar’s lawsuit claims that Prince wrongfully created copies of her photo without her consent and “engaged in acts of affirmative and widespread self-promotion of the copies directed at the public at large”. According to Salazar’s lawyer Douglas Linde, the makeup artist registered her selfie with the US Copyright Office on 25 March. Linde says he is not sure how she became aware that her image had been appropriated by Prince, but that “it’s an unauthorised use and we’re looking to vindicate our client’s rights”.

Both sides agreed earlier this month to transfer the case from California to New York federal court. Linde says he plans to refile the case “imminently”. Another case against Prince brought by the London-based photographer Dennis Morris is also due to be transferred to New York federal court. Meanwhile, Prince and Gagosian’s motion to dismiss the third lawsuit, brought by the Los Angeles-based photographer Donald Graham, is pending.

Prince’s New Portraits series features Instagram photos by famous and not-so-famous scantily clad women ranging from Kate Moss to the pin-up models the Suicide Girls. He enlarges the images, inkjet prints them on canvas and adds his own cryptic comments underneath. The image of Salazar was shown—and sold—at Frieze New York last year. Gagosian dedicated its entire stand to the series, which were reportedly priced at around $90,000 each.

Prince’s lawyer Joshua Schiller, of the firm Boies, Schiller and Flexner, says that the works are a commentary on social media and sufficiently transform the source material to qualify as fair use. “I think the facts will show that people perceive Richard Prince’s work to be different—the audience is different, the purpose is different,” he says.

To some experts, the significance of Prince’s work is inextricably linked to the litigation that surrounds it. “With the Instagram series, whatever else is going on, Prince is creating work that seems custom-designed for law school hypotheticals,” says the art lawyer and art historian Virginia Rutledge. “We’re presented with a confusion and collision of authors, expressive content, media channels and expectations about both economic and aesthetic value. He’s forcing the key question for fair use: ‘What does it take to make something entirely new?’”

Under US copyright law, the use of copyrighted material in a work of art is considered fair use if it comments on the original source material; Prince is leaving literal comments beneath the Instagram photos he reproduces.

A spokesman for Gagosian confirmed a report by Artnet News published in June that Prince and Gagosian Gallery had cut ties, but declined to comment on the recent lawsuit. (Schiller says he has a “good working relationship” with Gagosian’s legal team and that the split should have no bearing on the case.) A lawyer for Gagosian did not respond to a request for comment on the Salazar suit.