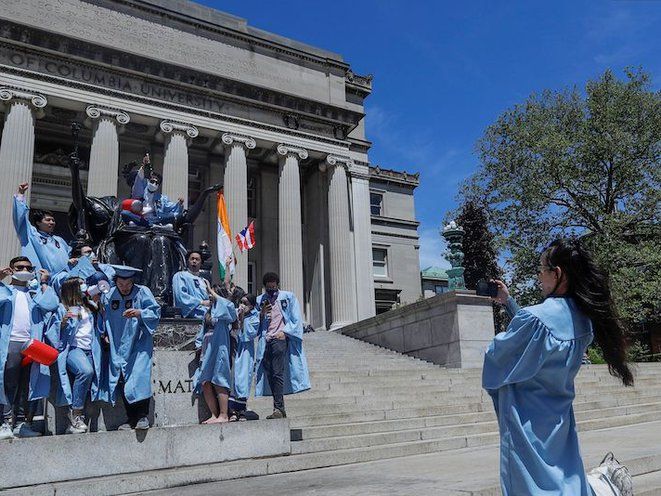 With one of the top art programmes in the US, Columbia University has more than 11,000 international students enrolled. FRANK FRANKLIN II/AP/SHUTTERSTOCK

International students whose universities have implemented online-only courses for the forthcoming autumn semester due to the coronavirus pandemic will be forced to leave the US or risk violating their visa status, according to a rule published by the US Immigration and Customs Enforcement (ICE) this week. The ruling could have devastating effects on art schools, where there are often a large number of international students enrolled.

Ravi Rajan, the president of the California Institute of the Arts (CalArts) in Santa Clarita, says that the policy “punishes international students and pressures institutions of higher education to make decisions about online course content that might not be in the best interest of students”.

Of CalArts’s roughly 1,500 student population, a quarter is international; a third of those students are from China. In a letter published last week, Rajan wrote that President Donald Trump is “desperate for re-election” and therefore “attacking China again” with his ban on foreign students, who “represent an enormous layer of our artistic and cultural fabric”.

The ICE rule applies to all foreign students and states that students who remain in the US while enrolled in an entirely remote academic programme will face “immigration consequences, including the initiation of removal proceedings”.

“Our community includes more than 1,000 international students and we are working to determine how they will be impacted by the new ICE-implemented modification,” says a spokesperson for the Rhode Island School of Design (RISD).

Considered the top art school in the nation, tied with Yale, RISD has about 2,500 students each year and it will be operating a hybrid attendance model this autumn that features online courses and reduced class sizes. “It’s too early to tell at this point what the effects will be, and they may vary by each unique situation, but we are consulting with immigration attorneys, the Association of International Educators (NAFSA) and colleagues from other institutions.”

According to a NAFSA report, international students contributed more than $40bn to the economy in the 2018-2019 academic year, and more than 60% did not receive financial aid from sources within the US. New York, California, Massachusetts, Texas and Pennsylvania saw the “largest benefits of spending by these students and their families on living expenses, tuition and fees”, according to the data.

The abrupt change in student visa viability marks “a devastating reversal of federal policy announced at the onset of the pandemic” that allowed foreign students to complete their spring and fall semesters online, says Lee Bollinger, the president of New York’s Columbia University, the art school of which is ranked among the top ten in the US. “The destructive and indefensible purpose driving these restrictive immigration policies is all too familiar, as is the resulting damage to the nation’s academic institutions,” he adds.

New York University (NYU), which has the largest number of international students in the US, will offer a hybrid programme of in-person and remote learning classes in order to meet the policy criteria, although the model could be “disruptive to some who will now be forced to rethink their fall schedules to ensure they include live classes”, says Andrew Hamilton, the president of NYU. Hamilton adds that international students, who number around 1.1m nationwide, “contribute to the vibrancy of university education in the US”.

Most leading universities are aggressively campaigning against the ICE ruling. Harvard and the Massachusetts Institute of Technology (MIT), which announced earlier this week that all courses in the fall semester will be offered online, have taken it a step further and have filed a joint lawsuit against the Trump administration in an effort to block the rule, which would impact thousands of students. The lawsuit states that the order was given without notice and during a time when the “pandemic continues to rage, with record numbers of infections in the US every day”.

Just weeks from the start of the fall semester, typically beginning at the end of August, students are largely unable to transfer to universities providing on-campus instruction, the lawsuit claims, “notwithstanding ICE’s suggestion that they might do so to avoid removal from the country”.

Mary Sue Coleman, the president of the Association of American Universities (AAU), says that the policy is “immensely misguided and deeply cruel to the tens of thousands of international students who come to the US every year, [and] it will do further damage to our nation’s universities, which are already struggling with unprecedented uncertainty, mass logistical complications and significant financial losses due to the ongoing Covid-19 pandemic”.

The AAU “strongly urges the administration to rescind this guidance and provide temporary flexibility to permit international students to participate in the range of in-person, online and hybrid instruction that institutions are implementing in light of the pandemic and their local conditions”, Coleman writes in a statement.

Though universities like CalArts do not anticipate a decline in enrollment as of yet, the lack of clarity around visas “takes a toll on the confidence of our international students and sows needless division, upends lives, devastates families and ruptures communities precisely when we need healing”, Rajan says.

“The arts represent a central part of cultural understanding and exchange, giving us nuanced perspective and insights that resonate with our humanity. Especially now, reinforcing the arts and artists of every origin is central to empowering expression and social change,” he says. “This is a moment to bind humanity together, not cleave it apart for political theatre.”