The artist behind the chainsaw spectacular in the Messeplatz

The smooth surfaces of Claudia Comte’s wooden sculptures bear little trace of her tool of choice: a chainsaw. Sanded and waxed to perfection in her Berlin studio, her abstract forms evoke cartoon cacti as readily as rigorous Brancusi totems. While wood remains an enduring love for the Swiss artist, who grew up in a chalet near a forest and learned her craft from local lumberjacks, she is also making a name for herself with ambitious installations in locations ranging from a mountain ice rink to the desert landscape of California’s Coachella Valley. 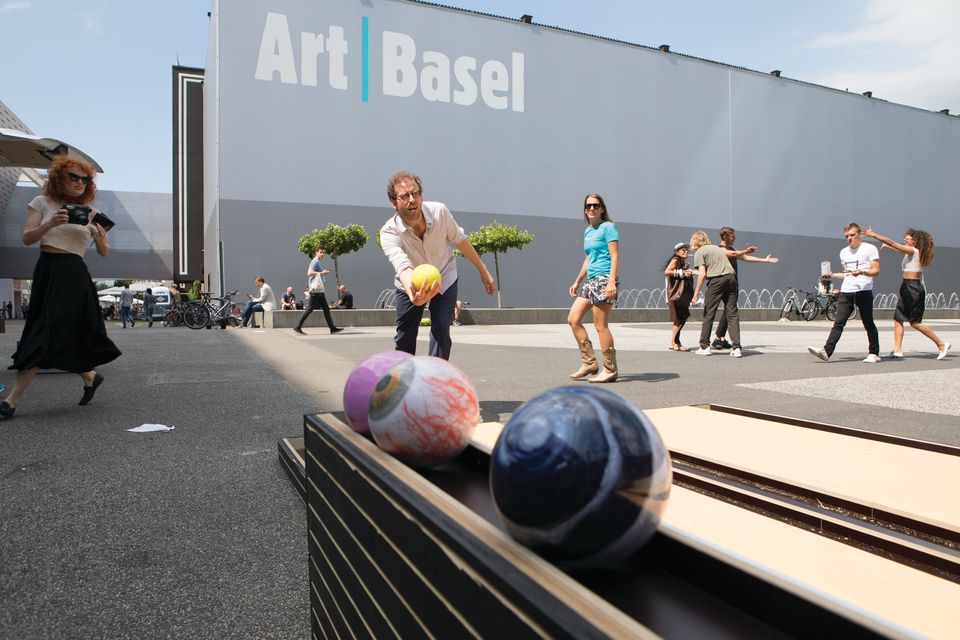 Comte’s installation Now I Won (2017) in the Messeplatz includes a funfair where visitors can win prizes as they throw darts at her paintings and use her sculptures as bowling pins. Here, dealer Johann König tries his hand at bowling. (Photo: David Owens)

Comte’s biggest outdoor project to date is now popping up on the Messeplatz during Art Basel. Twenty-three 800kg tree trunks spell out its palindrome title, NOW I WON, and overlook a working funfair where a series of seven games (set up in booths corresponding to each of the sculptural letters) encourage visitors to throw darts at Comte’s target paintings and knock down her sculptures like bowling pins.

The artist, who has a show at the Kunstmuseum Luzern (until 18 June) and is represented by König Galerie and Gladstone Gallery, tells us what prizes she has in store for her fair’s lucky winners and why fun can also be serious work.

The Art Newspaper: What drew you to the process of carving with a chainsaw?

Claudia Comte: It was a practical choice initially because it’s the appropriate tool for the material. I like to sculpt away at something that grows naturally, like wood or marble. I began to work in this way as a student, more than ten years ago at ECAL [École cantonale d’art de Lausanne]. I had to learn everything about what a chainsaw can do, as well as the correct processes in post-production—oiling, sanding and other treatments, which I have now refined.

Your works often have playful titles and cartoonish forms. Why do you feel it is important to bring humour to the strict geometric tradition of Modernism and Minimalism?

In many ways this is correct, but there is also a rigour and seriousness that underlies the work. It is important to me that the making of these forms follows quite a strict methodology. I don’t see “funny” and “serious” as mutually exclusive—they can very well co-exist in the work.

Where did the idea of a funfair come from? Did you want to compete with Art Basel and Circus Knie across the street?

Two years ago at [the project space] Salts in Basel, I created a platform for dancing, drinking and arm wrestling, and I loved the audience’s positive reaction. When I was invited by [the curator] Chus Martínez to think about this public venue, I wanted to expand on that idea.

This piece echoes many of the festivals that take place in the Swiss countryside, where I am from. Both the annual circus nearby and the autumn fair, which takes place on the Messeplatz, also played a role in the conception of this work. It’s a reflection on the past and future roles of public spaces. Departing from this traditional, even anachronistic model of “fun”, the piece is really offering itself to the people of Basel.

This seems like your most kinetic and interactive environment yet. How has it pushed the boundaries of your practice? Making this piece has been challenging. I am combining all the artistic languages I normally use in a completely new context. While it’s the largest sculpture I have made to date, you will also find my smallest chainsaw-carved pieces. There are paintings and sculptures, and the link to nature is there too, even though we are in the middle of the city. It only works if people use it, and this is what makes it so exciting for me. 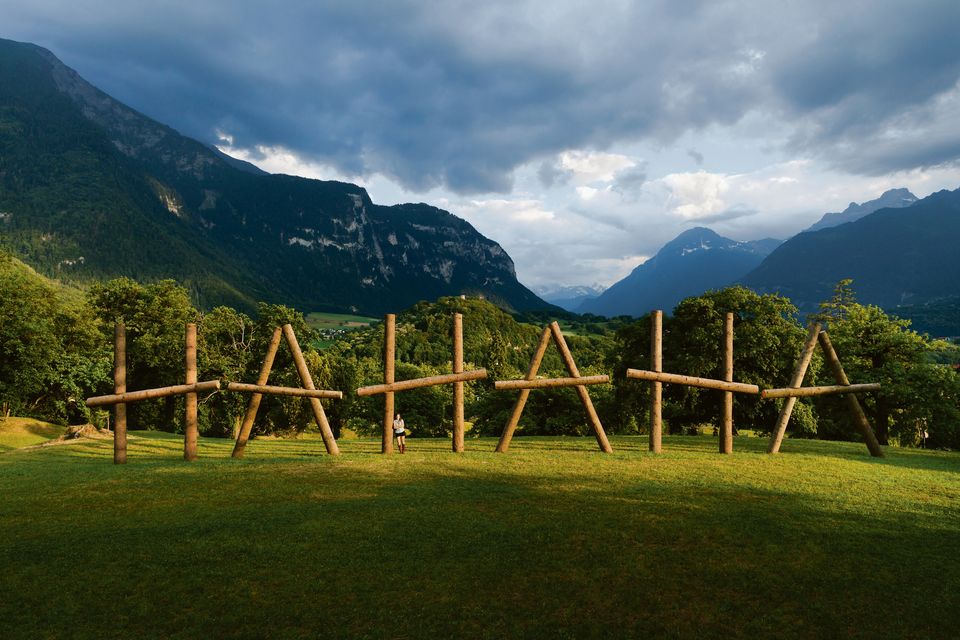 Your works are carefully crafted but this piece invites the public to treat them as dartboards and bowling pins. Were you interested in the destructive side of this gesture?

I hope people understand that these elements are not exactly works of art but parts of the installation. My piece should not be read as a gigantic toy, but as an environment where every element is fundamental to the whole. That is why my team and I have made everything by hand. It is very important to me that this kind of care is transmitted to the visitors. Here another concern emerges for me: how to introduce art as love, as joy in the public sphere.

You are offering an original work of art as a prize to the winner of the games. Can you say what it will be?

Actually, there are three prizes, almost like winning a medal—first, second and third prize. They are all made of marble and take the form of shapes I am into at the moment: doughnuts, snakes and cacti. Each has been milled from marble but is based on a wooden sculpture that I originally formed by hand. This translation of the material is still visible in the marble.

You seem to be poking fun at the “circus” of the contemporary art market right in front of Art Basel. Is there a critical edge to the work?

Of course there is; we are all taking ourselves far too seriously. But this is meant with a wink of the eye. The work is open to many different interpretations in relation to the function of fairs today, such as art’s place within the greater economic context, and the accessibility of art, as well as its role in the gentrification of cities.

What do you think of art fairs and of Art Basel in particular?

Fairs are one part of the art world, and they need to be read as such. There is a critical and social aspect, as well, that I particularly enjoy at Art Basel. Seeing other artists’ works, old and new languages, the varying formal and aesthetic choices, the masterpieces co-existing in such close proximity to each other, still amazes me.

How do you see your position as a young, and female, artist who has found early success within a commercial system?

I love this question. I do not remember ever hearing such a remark addressed to a male artist. It shows we are still surprised when a female artist gains recognition because of her work. Success is a very relative term, and what “commercial” implies is that I can develop my work without needing another job. I can only say this is a situation where I hope to see many artists, and many female artists, without it being perceived as some sort of exception.

What future projects are you working on?

I am preparing a new piece for KölnSkulptur #9, [the biennial at] a sculpture park in Cologne, opening in October, which is being organised by Chus Martínez. At the beginning of next year, I am part of a performance-based group show at Kunsthalle Basel. However, what excites me most is my upcoming trip to Indonesia in August, headed by an animal and nature activist, where I will be filming new material for my next video piece. 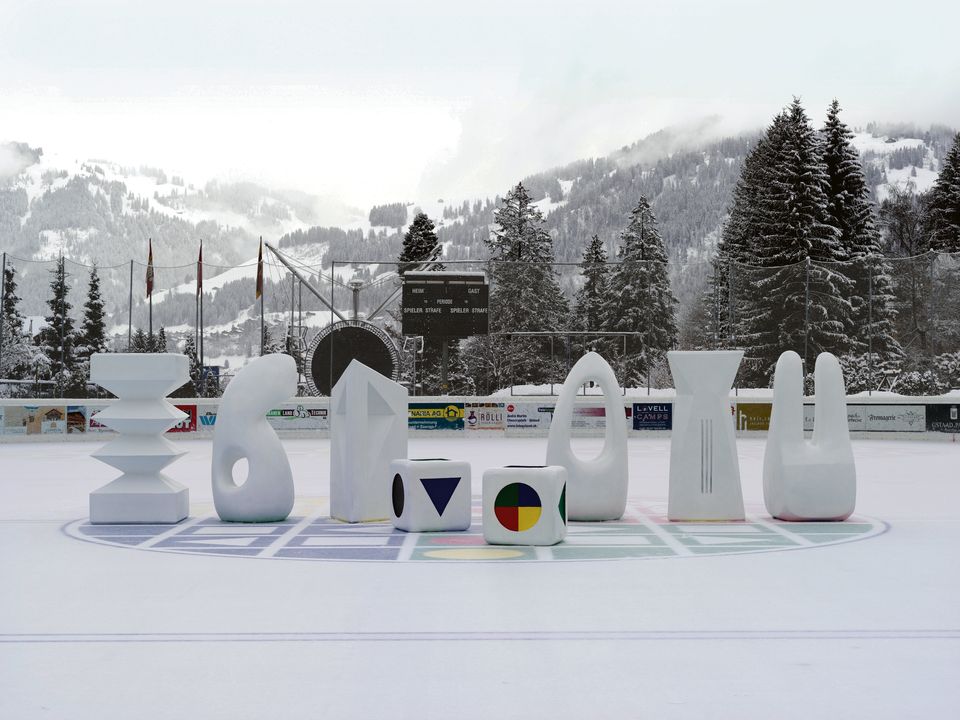 The first edition of the site-specific exhibition in and above the ski resort of Gstaad featured work exclusively by Swiss artists. Comte turned the village ice rink into a giant board game, allowing participants to make up their own rules. Members of the public skated over five circular colour-field paintings beneath the ice and pushed around six chainsaw-carved polystyrene pawns.

The Language of Things, New York 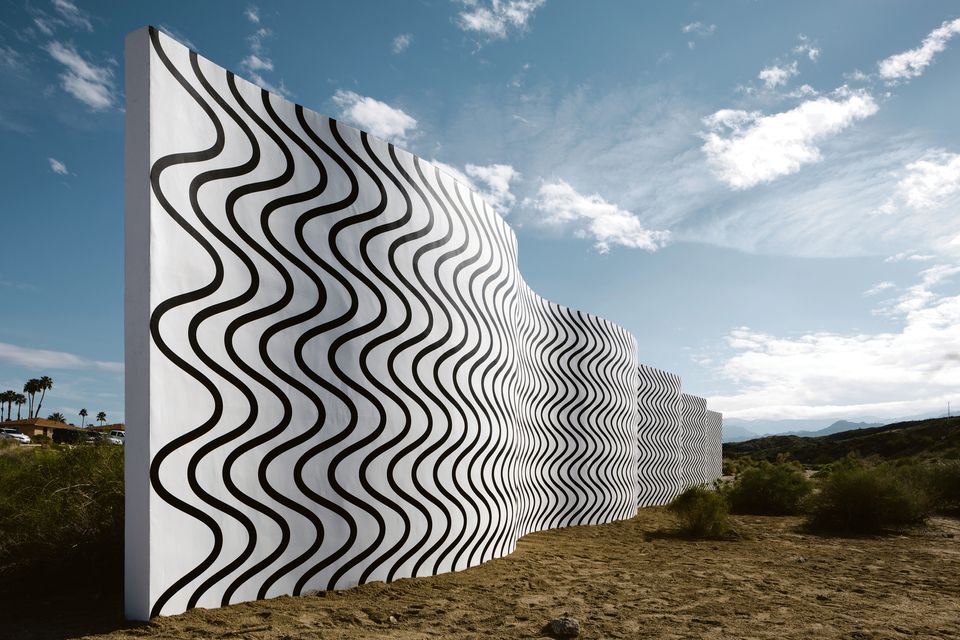 This Op Art-inspired free-standing wall was a hit with Instagrammers when it was installed this year near Palm Springs as part of the inaugural Desert X show (organised by the Elevation 1049 curator Neville Wakefield). The shifting shape of the double-sided structure echoed the patterns painted on it—graduating from undulating waves to spiky zigzags.