Despite travel bans and complications, many galleries from oversees had a presence, giving the first major US fair since the pandemic a truly international tone Inside the 2021 Armory Show—the largest fair in the US since the pandemic hit—at its new home in the Javits Center Courtesy of the Armory Show, Photo by Casey Kelbaugh

It is a beautiful thing, to see hundreds of people all happy to view some art. At the Armory Show, which opened in New York on Thursday and runs through Sunday, a large part of that warm, cozy feeling was caused by the fair’s permanent new home. The Javits Center's 55ft ceilings and massive exhibition space gives the fair—the largest in the US since the pandemic hit last year—room to breathe and the timed entry assures that visitors will be able to pause and appreciate the work in each booth, have a real discussion with gallerists and artists, and be able to recognise each other from across the halls despite everyone wearing a mask. A time when the Armory had to rapidly shift plans because the pier below them was actively crumbling now seems like a distant memory. “The response from exhibitors has been so positive, it’s a more fitting venue for the fair on every level, more sophisticated, centrally located,” Nicole Berry, director of the fair says. “It’s exactly what we needed.”

That energy translated to healthy sales on the fair's opening day, when collectors and the art world's illustrious combed the booths in the morning, looking at and often scooping up the tastiest morsels on offer from the 157 galleries that were able to have a physical presence this year. The collectors Estrellita Brodsky, Don and Mera Rubell and Pamela Joyner were in attendance, as were the artist Richard Prince and the actor Rhea Pearlman (whose daughter Gracie DeVito is showing at the fair).

There is a surprising, and much welcomed, international presence despite the face that more than half of the 99 galleries based outside of the US were not able to come to New York due to travel restrictions (although they are showing works in the Armory's online viewing rooms). Visitors will see many galleries from Asia, Africa, the Middle East, Europe and South America who are lucky enough to have staff members with US passports. The other, more complicated route to for exhibitors came with a pit stop, and a two-week quarantine, in Mexico. There is a notable amount of figurative work offered across the fair, especially pieces that featured or were made by people of colour, a nod to the market’s recent love affair with the human figure and the art world's broader attempts to become a more equitable place. Marianne Boesky Gallery and Library Street Collective (booth 216) sold the artist Jammie Holmes’s Furs and Concrete (2021) to a museum in China for $65,000. The picture, which features a figure, wrapped in a lush fur coat standing in a modest, checkered linoleum floor kitchen and holding a church fan is a perfect representation of the self-taught painter's gift for capturing the beauty of day-to-day life for a Black family in the American South. In a similar vein, the Brooklyn-born artist Kambui Olujimi’s work, on view at Anna Zorina Gallery's booth (F4) comments on the moments of transition that surround the recent removal of monuments across the US and the legacy of colonialism those monuments represent. 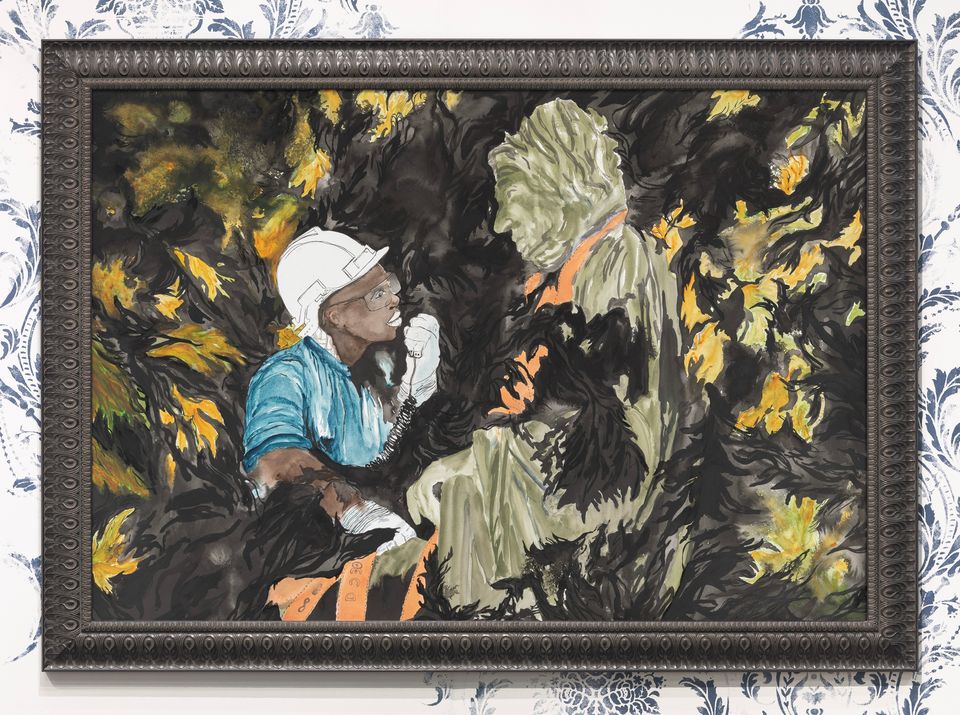 Visitors and collectors who were eager to purchase art did so with gusto during the opening, with some booths coming close to or completely selling out of work. Galeria Nara Roesler (booth 201), which has spaces in New York, São Paulo and Rio De Jenario, had a banner day, selling 16 works by 13 different artists including Surfaces: Harlequin, after Pablo Picasso (2021) by Vik Muniz for $60,000 and a work by the artist Fabio Miguez, Untitled from the Volpi series (2020), also for $60,000. The Lagos and Los Angeles-based Rele Gallery (P3), from the fair’s Presents section, sold all the work on view by their artist Chidinma Nnoli, while New York’s Marc Straus Gallery (F5), which had a booth in the fair’s Focus section curated by Wassan Al-Khudhairi, sold their entire booth of works by the artist Marie Watt, each one with a price tag of more than $100,000. Watts’s textured, layered work shares a theme, at least in spirit, which seemed to trickle through many of the booths at the fair. There was a prevalence of three-dimensional wall pieces, tapestries, embroidery and sculptural works that seem to want to either jump off the canvass or be wrapped around the viewer. 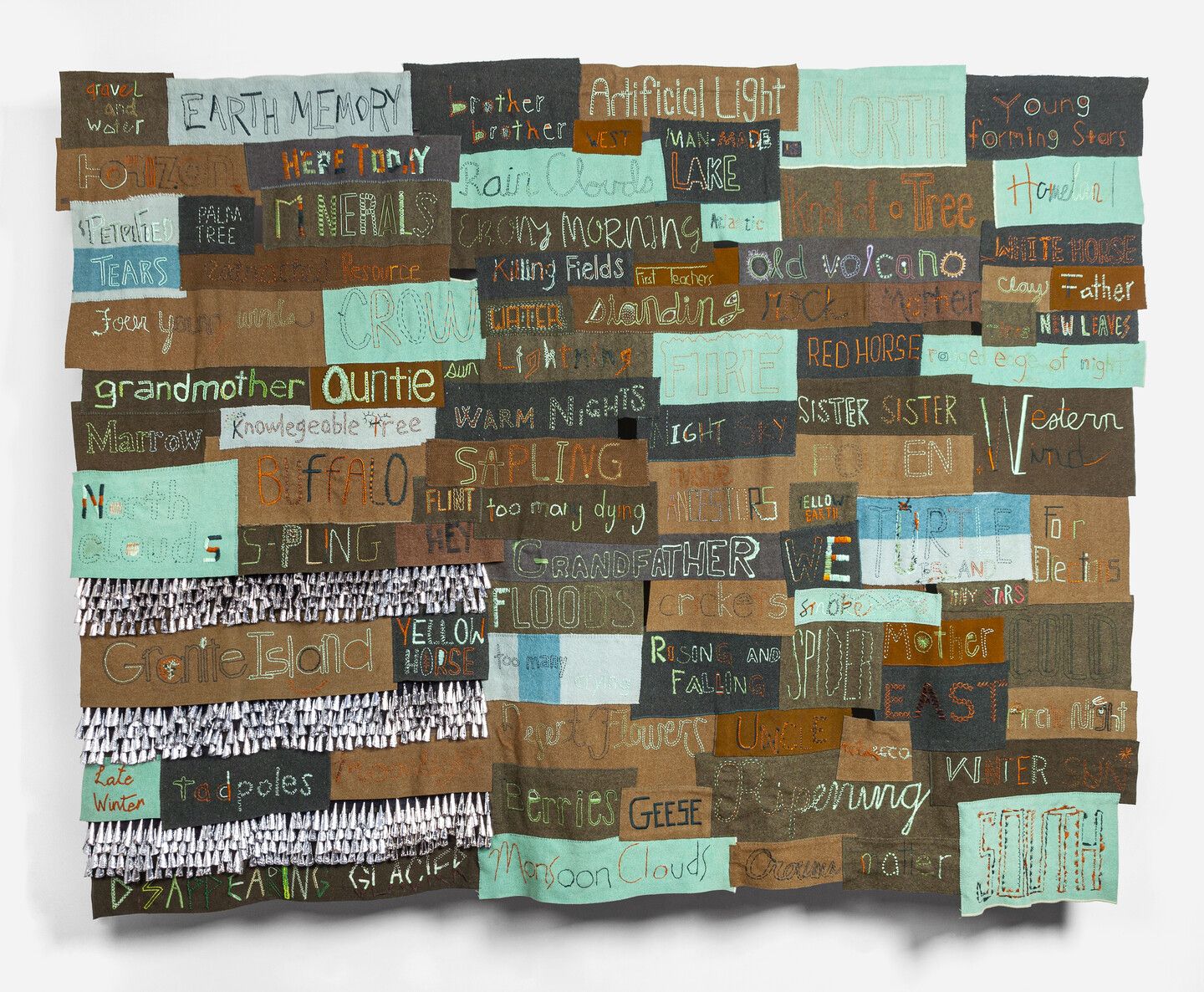 One Los Angeles-based gallerist told The Art Newspaper that, while the pandemic-era was an ideal time to for an artist to work with textiles and many were drawn to the meditative act of sewing and knitting, especially during a tumultuous time such as ours, “where always seems to be a trend at these fairs without everyone talking about it, whether it’s ceramics or tapestry,” she says. “I think people are looking for work that is something more than a painting, and a wall work—which is intricate, tactile, extremely labour intensive and technically challenging—really speaks to them. You just get so much out of it. There are so many rounds and iterations that these kinds of work go though, they in a way have a deeper history, or different kid of history, than a traditional painting does. I think that speaks to people, especially now.”