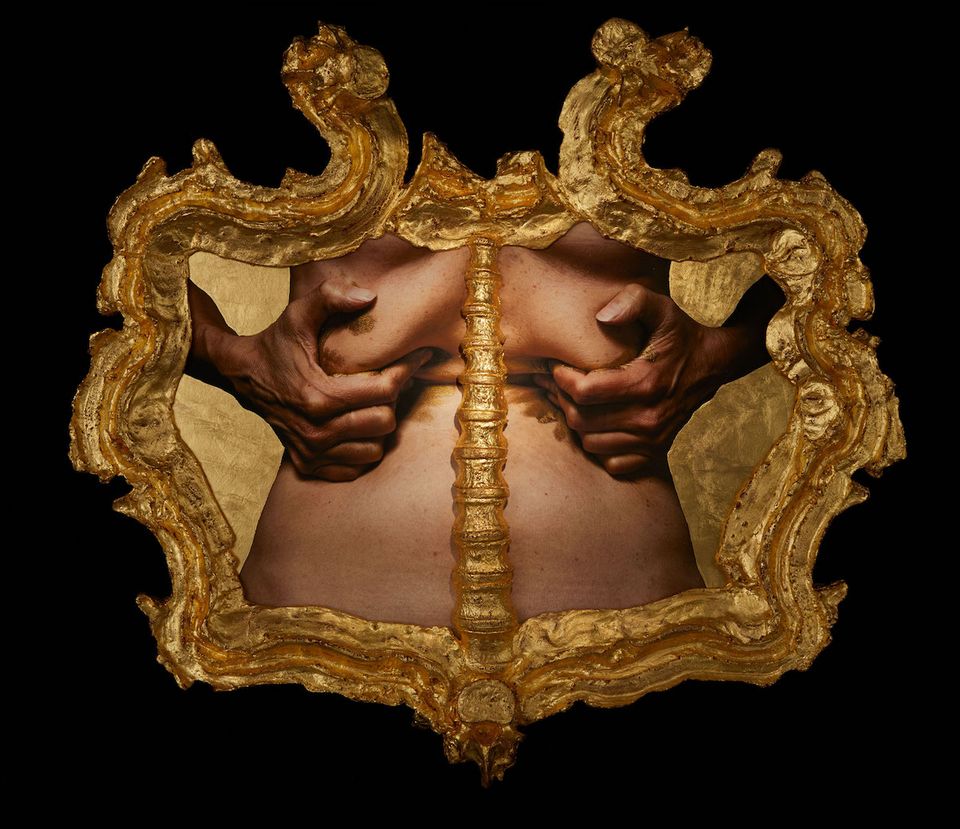 The catacombs of Green-Wood Cemetery in Brooklyn have been animated with a series of sculptures reminiscent of religious icons in the latest project of the New York-based multidisciplinary artist Janine Antoni. The site-specific commission, called I am fertile ground, aims to “create a space for people to contemplate and become comfortable with what is inevitable for all of us”, the artist says.

The works, which are placed in rooms throughout the catacombs, each consist of a photograph that the artist has captured of her own or her parents’ bodies surrounded by a frame cast from fake bones and gilded in 24-carat gold. Across from the works, performers enact a series of gestures and recite various chants that metaphorically encapsulate the images.

A photograph of Antoni holding her ribs references “the sacred heart of Jesus and the idea that this area of the body—which holds the heart and lungs—is where we hold much of our emotional and physical memories”, she says. Another image of her mother’s hand touching her father’s ear, symbolises “physicality and aging”, she adds.

Antoni is the first artist to install a project in the catacombs, which make up one of the historic cemetery’s oldest structures, dating to the 1850s, and are not typically open to the public. She chose the location to demonstrate the juxtaposition of “Green-Wood’s beautiful landscape, where the bodies are below you, and the catacombs, where you enter the space of the dead”, she says. “It feels cold, dark and so visceral, and you can sense that this is your fate.”

The artist is best known for utilising her own body in performances that reference everyday rituals. “When I practice movement, there are moments where I feel like I’m part of everything around me, and there’s that same idea around the afterlife, where you physically become a part of everything but separate from your physical self.” She adds, “I hope the work won’t scare people off but make us think about the notion that we’re together, whether in the earth, ground or sky.”

The project runs until 17 November on weekends and is accompanied by a series of programmes. On 21 October, there will be an artist talk with Antoni, who will serve tea made from leaves she gathered at the cemetery that have medicinal qualities.