As his new exhibition opens in London, the conceptual photographer tells us about the Fauvist-like work and the theory behind it 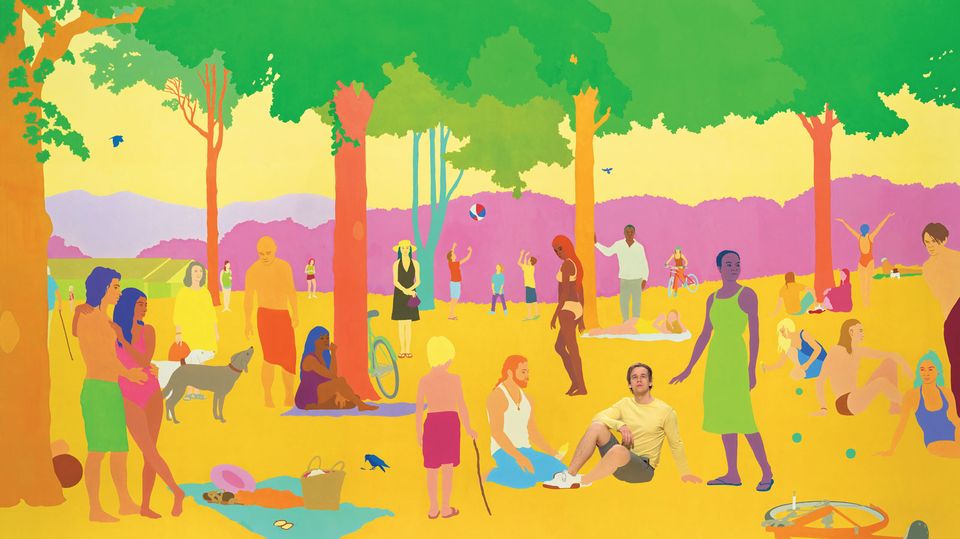 In his latest exhibition at the gallery in St James’s, Wall is exhibiting several new large-scale works (28 June-7 September). But Recovery, a 4.5m-wide photograph of sorts, which Wall has spent the last two years developing, will undoubtably take centre stage.

Wall has worked as a photographic artist since 1972. Yet, as a student at the University of British Colombia, he learnt primarily about the history of painting. For a brief period at the start of his life as an artist, he considered himself to be a painter. Now, at the age of 72, he has returned to his first love, and is exhibiting, for the first time, an image that combines painterly techniques with the exacting visual realism of a photograph.

Recovery depicts a seaside park on a summer afternoon. In the foreground we see a young man sprawled on the floor, his expression one of delirious confusion. Surrounding him are human figures at play: swimming, exercising or sunbathing.

Yet this is no ordinary photograph. Indeed, it appears to be a photograph of a painting. The image is executed in photo-perfect perspective, yet presented in a flat, decorative style. Whilst retaining the concreteness of a specific moment in time, the figures are depicted with an intensity and vividness of colour that recalls the Fauvism movement of 1905-10, the so called Wild Beasts, whose use of colour and depictions of primitivism rocked the Parisian art world. Henri Matisse’s Le Bonheur de Vivre (1905-06), also a seaside scene, seems to be a particularly touchstone, as does Paul Gauguin’s Vision After the Sermon (1888), itself an expressionist blending of the real and the fantasy.

“[It is] a picture of something that can’t exist, and yet there it is” Jeff Wall

Wall’s image, therefore, has a psychedelic quality. It is “a moment depicted that couldn’t exist except in some sort of vision,” Wall says. “A picture of something that can’t exist, and yet there it is.”

It has been two years in the making. What was its genesis? “Most images I make have a starting point that isn’t planned,” Wall answers. “They don’t come about in the sense I needed to do it. It just came up.”

Wall has previous when it comes to “hallucinatory moments”. He recalls the creation in 1992 of his earlier image Dead Troops Talk—a violent vision of the moments after an ambush of a Red Army Patrol, near Moqor, Afghanistan, in the winter of 1986, in which the soldiers afflicted appear to rise from the dead and cajole each other, despite their fatal wounds. Then there is The Flooded Grave (2000), in which a rock-pool full of beautiful marine creatures lies in a freshly dug plot in a grey, foreboding cemetery. The image came about after Wall photographed two Vancouver cemeteries over the course of several months. He then built an aquatic system in his studio, crafting the tank from a plaster cast of an actual grave. Wall then cultivated a living, underwater ecosystem identical to one found off the coast of Vancouver.

“I wasn’t planning on doing another one,” he says of his vision-images. “But I don’t start from ideas. I start from a subject that might lead to a picture.”

Wall is a private person, one who exhibits an incredible ability to discuss the theory behind his art whilst simultaneously keeping his personal motives at a remove. Has the image been inspired by an event in his personal life? “If one was afflicted in some way and then suffered, I suppose, and then recovered, either through treatment or miraculously—that would be an exhilarating moment,” he says. “It would be a deliriously happy instant. I thought: ‘Well, everybody knows someone whom they would be hoping to recover from something.’ If the person did recover, the world might seem like a wonderful place, just because this blessed event occurred.”