The demolition has been praised by high-profile Hindutva leaders 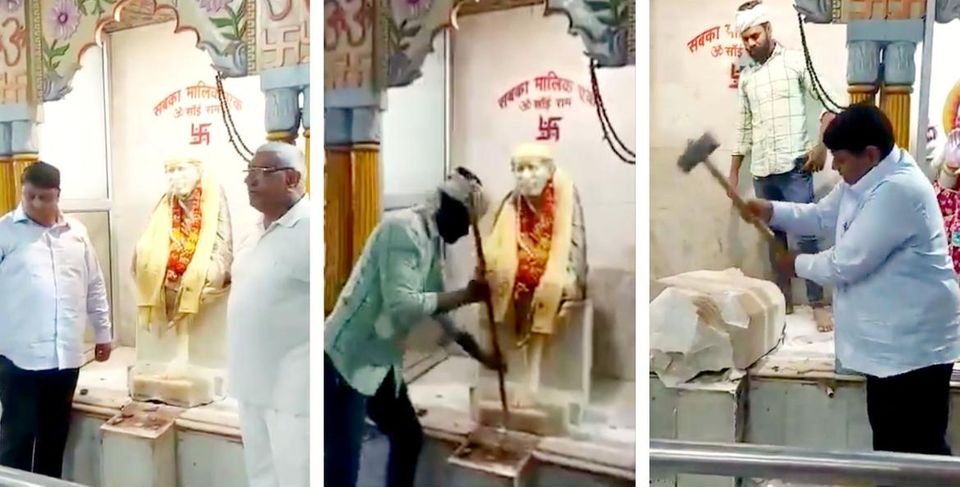 Delhi Police are investigating the removal of a statue depicting the spiritual leader Sai Baba from a temple in the city's south, after several videos emerged online showing a group of men demolishing the idol and declaring him a "Muslim".

Sai Baba, a 19th-century spiritual teacher from Maharashtra, notably opposed persecution based on religion and caste and kept his religion intentionally ambiguous. He is worshipped by both Hindus and Muslims.

According to a police report, the idol was removed on 25 March from the Purana Shiv temple in the neighbourhood of Shahpur Jat. It has since been replaced by a statue of the Hindu deity Ganesh. A wall sticker with the saint’s popular preaching "sabka malik ek" or "everyone’s Lord is one" has also been taken down.

A number of Sai Baba's devotees in Delhi have since filed a complaint, but a formal case has yet to be launched, Atul Kumar Thakur, South Delhi's deputy commissioner of police, told Press Trust India. He added that the temple's authorities will replace the idol "with the consent of local residents”.

Appearing in several of the videos is the high-profile Hindu priest Yati Narsinghanand Saraswati, who has been described as "one of the shrillest voices in the Hindutva ecosystem". He is currently under investigation by Delhi police for stoking religious tensions with an inflammatory speech against the Prophet Muhammad, in which he calls for a "war on Islam". Earlier this month, he publicly praised the beating of a 14-year-of Muslim boy, who was seriously injured on 12 March for drinking water from a Hindu temple in the northern city of Dasna, Uttar Pradesh.

However, Scroll.in reports that a number of temple authorities who appear in the video now deny that Sai Baba's religious syncretism prompted the statue's demolition.

Padam Panwar reportedly said that the figure, which was erected in 2009, was taken down because it was old and damaged. In the video he can be heard saying: “He is no god. He died in 1918. He is Muslim.” Several locals told Scroll.in that they saw no discernible damage on the statue in the weeks preceding its removal.

Another temple committee member, Jitender Panwar, also pointed to the statue's age and condition. Scroll.in reported that a message forwarded by Panwar on the Shahpur Jat society’s WhatsApp group on 27 March claims that the popularity of Sai Baba “also known as Chand Miyan” was a “conspiracy economically supported by the Islamic world”.

Sai Baba is worshipped widely across India and the world, with numerous temples and monuments dedicated to him. However in recent years, his philosophy has become a hot button issue amid rising Hindu nationalism abetted by the ruling political party the Bharatiya Janata Party (BJP).

Soon after the BJP came to power in 2014, a conclave of Hindu priests passed a resolution that he should not be worshipped.