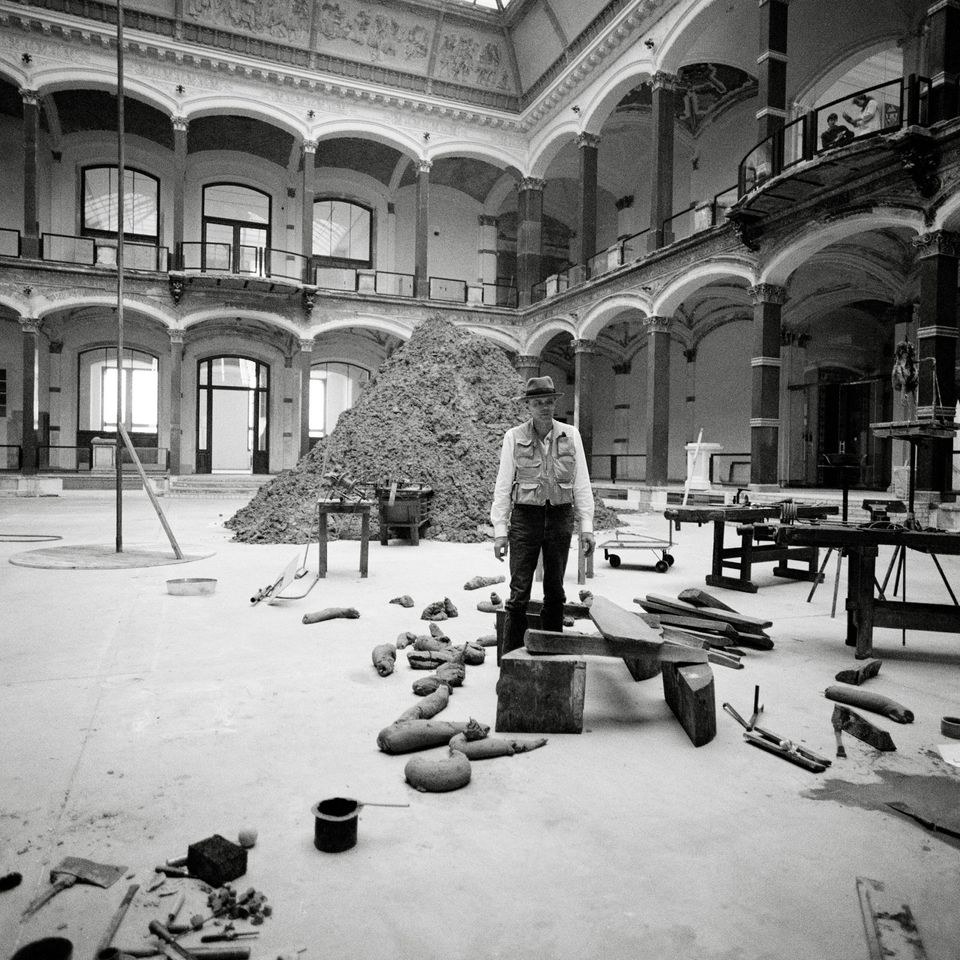 Joseph Beuys in front of Stag Monuments in the Zeitgeist exhibition at the Martin-Gropius-Bau, Berlin in 1982 Jochen Littkemann. Courtesy of Galerie Thaddaeus Ropac London · Paris · Salzburg

Thaddaeus Ropac has secured representation of the estate of Joseph Beuys worldwide.

The Austrian dealer revealed the news on the eve of opening what he describes as the “most important” show of the German conceptual artist’s work to be held in the UK in a decade.

“There were ongoing discussions with several parties. I am very happy that the family has decided to go with us. This is the first time the family is being represented by a gallery,” Ropac says. “We have so many exciting ideas for future exhibitions and projects.”

The Beuys estate, which is run by the artist’s widow, Eva, and the couple’s two children, Jessyka and Wenzel, has lent several works to Ropac for an exhibition opening next week (until 16 June) at Ely House in Mayfair, the Georgian townhouse that houses Ropac’s London gallery.

The centrepiece of the show is Stag Monuments, which Ropac acquired from the estate two years after showing it in his Paris gallery in 2012. This complex installation was created by Beuys for a 1982 exhibition at the Martin-Gropius-Bau in Berlin, co-organised by Norman Rosenthal, who has also organised this show for Galerie Thaddaeus Ropac.

For the original installation, one of the last large-scale works made by Beuys before his untimely death in 1986, the artist created a huge mound of clay in the museum atrium and around it placed several sculptures, including abstract representations of a stag, goat, and lightning built from furniture, as well as other objects and tools from his Dusseldorf studio. For Beuys, the stag was an animal “that appears in times of distress” and “who, via the perpetual shedding and regrowth of its antlers, acts as a potent symbol of rebirth and renewal”, according to Damian Lentini, a curatorial fellow at the Haus der Kunst in Munich, writing about the work when Ropac lent it for a display there.

The artist would go on to cast many of the sculptures in this installation in bronze and, says Ropac: “The astonishing thing is that Tate Modern has a bronze version of the environment on permanent display, so our exhibition provides an extraordinary opportunity to see the original version of the installation and the later bronze reworking of the piece in the same city at the same time.”

Other works on display include early drawings and a group of early bronze sculptures on loan from the estate and from other private collectors. “Around one third of the works on display are for sale,” Ropac says. Prices range from £85,000 to £250,000 for early drawings; £300,000 to £900,000 for small early bronzes; £1m to £4m for medium-sized sculptures and £5m-£10m for larger sculptures.

The price for Stag Monuments is not being disclosed but Ropac is determined to find an institutional home for the installation. “We’ve had many private offers for the work but it needs to go to a museum. We will take our time and I am sure we will succeed,” he said in an interview for The Art Newspaper’s weekly podcast.

The demand for Beuys’s work is constant and it is international, Ropac says—when he staged a smaller show of the artist’s work in London last year, he was surprised to receive enquires about the work from as far afield as China, among many other countries. “A new generation is discovering Beuys,” he says, adding that he was “delighted” when he visited the How Art Museum, set up by the collector Zheng Hao in Shanghai last year, and discovered that the inaugural show was devoted to editions by Beuys.

The artist has a patchy auction history and his work is best suited for display and sale in galleries, Ropac says. “Beuys was a Utopian, a dreamer, a radical political thinker and a founder of the Green Party in Germany who created an enigmatic artistic iconography.” His work is incredibly complex and requires more research and context than auction houses are able to provide, Ropac says.

Ropac has collaborated with the Beuys estate for many years and he even credits the late German artist with setting him on his life’s path. “I heard Beuys speak in Vienna when I was a teenager and he changed my life. He brought me to contemporary art.” Then, in 1982, Ropac worked as an intern in Beuys’s Dusseldorf studio, mostly “schlepping beer”, just as the artist was creating Stag Monuments for the Martin-Gropius-Bau in Berlin. “He was one of the most charismatic people I ever met in my life. He would enter a room and even people who didn’t know him would be captivated by him. I met the Dalai Lama once and, of course, he is a great person but even he did not have the presence of Joseph Beuys.”

• For an interview with Thaddaeus Ropac and Norman Rosenthal, listen to our podcast