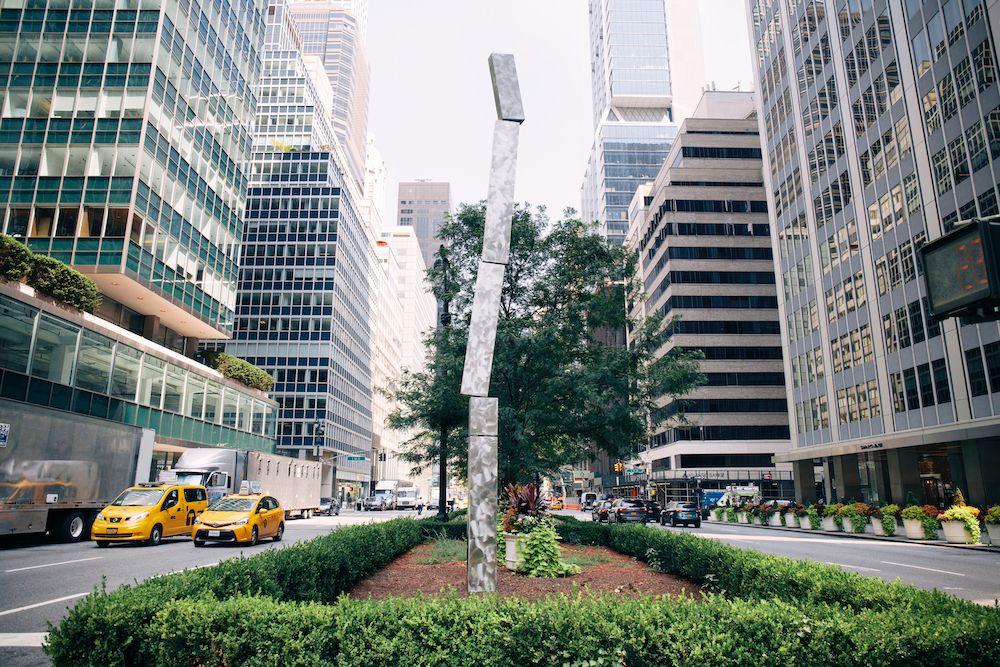 On the Park Avenue Mall in Manhattan, between 53rd and 54th streets, a 25-foot-tall, segmented column stands on the strip of manicured greenery that separates lanes of traffic. Each section of the column looks to be gingerly balanced on the one below. The slightest breeze can tip a section awkwardly forward or to the side, like someone who has missed a step and lurches forward. The kinetic sculpture, George Rickey’s Breaking Column II (1989), does exactly what Rickey wanted all his work to do. “It’s activated by, and activates the surrounding environment,” says Eric Gleason, a director at Kasmin, which is putting on the exhibition with the George Rickey Foundation and the artist’s estate.

The sculpture is also perfectly placed. In the distance, two of the city's tallest skyscrapers loom over Park Avenue, seemingly indestructible and out of reach, are made of the same stuff as Breaking Column II and subject to the same winds that move the sculpture's sections around. “It really brings down to earth and humanises the race to build higher and higher,” Gleason says of the Rickey's work. “Things don’t have to be tall to be architecturally stunning.”

In total, nine of Rickey's monumental sculptures, spanning from 1964 to 2002 (the year the artist died), are installed on the Park Avenue Mall, coinciding with the publication of Rickey’s biography by the author Belinda Rathbone, George Rickey: A Life in Balance. "I think it will be a revelation for a lot of people," Rathbone says. "I’m always surprised how relatively unknown Rickey is, especially now."

Though Rickey’s work was well known during his lifetime, according to Rathbone, some would say he did not spend enough time promoting himself in New York, which in the 1960s was dominated by the Pop Art movement. Instead, Rickey spent a great deal of time in Germany and the Netherlands, where he felt a camaraderie with young artists who were part of the Zero Group and the New Tendency movements, which are less recognised in the US. “Rickey’s work deserves fresh eyes, and this exhibition is a wonderful introduction to his broad intelligence and character,” Rathbone says. “As cool and abstract as the work seems, it’s also risky. It’s meant to move randomly, unpredictably and to factors outside his control. It’s an expression of the way his mind works.”

Three other sculptures from the 1960s are on view at Kasmin’s rooftop garden, giving a pastoral counterpoint to the metropolitan setting of the works on Park Avenue, and resembling how Rickey displayed his sculptures on the grounds of his studio in East Chatham, New York. The rooftop garden is also visible from the High Line, so passersby can see the group of sculptures interacting with the environment, just as Rickey would have wanted.

“He was a public artist before he was a sculptor,” says Philip Rickey, the artist’s son and president of his foundation. “From the 1930s through the 1950s, he was a painter and did a lot of big commissioned work at colleges, and worked with the Works Progress Administration. So from beginning he was very interested in making art that connected with a broad audience. He had an expansive, broad idea of engagement, of connecting to people, and made things that caused people to pause, to take time to see how the elements interact with each other and with their surroundings.”