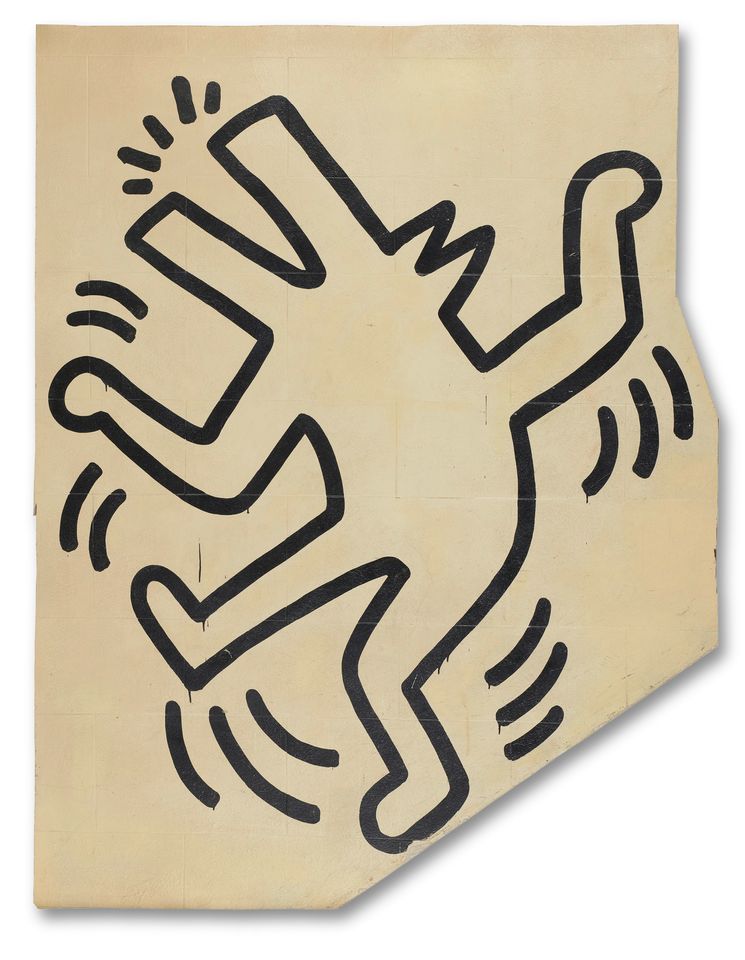 Untitled (The Church of the Ascension Grace House Mural), circa 1983/1984 (detail) Photo courtesy of Bonhams

A Keith Haring mural carved from the walls of a former Catholic youth centre in Manhattan sold at Bonhams for $3.86m. Known as the Grace House Mural, it was painted all in one evening in the early 1980s, and it snaked up the home’s stairwell for three stories, stretching 85-feet long and adorning the building with iconic Haring figures including his radiant baby and barking dog. The Grace House has since closed, and the Ascension Church next door, who owns the building and had leased it out to the Grace House, had decided to sell—both the building and the Haring therein—to fund the church’s maintenance and operation costs.

The church spent $900,000 to have the mural carved out of the cement walls in 13 sections, some weighing up to 1,000 pounds, and all 13 sections were sold together as one lot. The lot entered the night with an estimate of $3m-$5m, and went to an as-of-yet anonymous phone bidder for $3.2m ($3.86m with fees). This was the first Haring mural ever to appear at auction, the artist’s current auction record overall stands at $6.5m for an untitled painting, set in 2017.

Philip Zeafla, the church’s business manager, hoped the mural would sell to an institution where it could be displayed publicly, adding that part of the proceeds may go to the Keith Haring Foundation or another cause that Haring cared about.

Gil Vazquez, the acting director and president of the Keith Haring Foundation, says the foundation is “not set up to receive donations as we are not a fundraising organization,” adding that “the gesture was thoughtful but we can not legally receive donations directly”.

Vazquez noted that the foundation and the church discussed the possibility of “finding a buyer for the building that would have kept the mural intact,” adding that he was disappointed it was taken to auction. “The mural was not intended for someone that could pay nearly $4m for it. It was meant for the kids that lived there once upon a time to enjoy. Context is important but so is history. Time will tell if this sets a bad precedent.”