After outcries against the work on social media, the Cree artist says that the image "failed" in its message to address the victimisation of Indigenous women 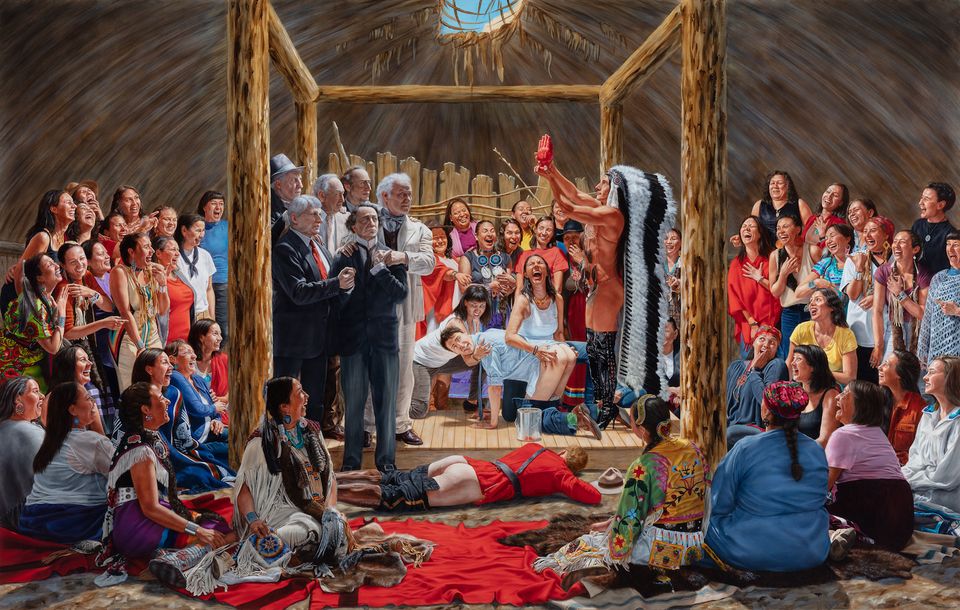 The painting shows a council of Indigenous women with Miss Chief Eagle Testickle—a supernatural, gender-fluid figure that often appears in Monkman’s work—at the centre, while Trudeau, who is shown nude from the waist down and on all fours, prepares for “not a punishment but a consensual act that Miss Chief willingly delivers” with a large red hand, the artist wrote in a statement. A Canadian "Mountie" police officer can be seen similarly exposed on the floor.

Monkman shared images of the work on his social media, writing in the caption that the work highlights the problems of the "Canadian (in)justice system". The intent behind the composition, according to the artist, was to address the victimisation of Indigenous women, who experience violence and sexual assault more than triple that of non-Indigenous women in Canada and in the US.

Some viewers, however, suggested in their comments on the image that Monkman was valorising violence rather than critiquing it.

In a written apology shared on social media and on his website, Monkman acknowledges that “elements included to indicate consent” in the painting were “not prominent enough”. He adds, “Regardless of my intentions, some were harmed while viewing” the work.

Part of Monkman's commission for the Met, "Welcoming the Newcomers" (2019) was unveiled in the museum's Great Hall in December. Courtesy of the artist and the Metropolitan Museum of Art

The artist is known for his works that reflect on and subvert violent colonial histories. Most recently, Monkman was commissioned by New York's Metropolitan Museum to create two large-scale paintings for its Great Hall, appropriating imagery from historical European and American paintings within the museum's collection.

“I wish for my work to resist the colonial traumas inflicted upon my own family and so many others for generations, not to perpetuate harm. I see that with this work, I have failed.”

The composition was intended to show a “consensual act” between Trudeau and the characters depicted, according to the artist. In the painting, Trudeau’s consent is allegedly symbolised by an inconspicuous red handkerchief in his pocket—a token used in gay subcultures in the 1970s and 80s to reference sexual preference and fetishes and to find consensual partners.

Monkman says he titled the piece Hanky Panky in similar good humour as a reflection on the “nature of the character, the exuberant laughter of the Indigenous women and the trickery and deceit of each successive colonial government since Canadian Confederation”.

Additionally, the artist says he regrets specifically referring to the Okihcitâwiskwêwak—the traditional council of Cree women law keepers—in an original statement he wrote for the work, and will remove references to the community in future writings, but that his intention was to show “a group of Indigenous women reclaiming their agency from the colonial patriarchal society which has suppressed the leadership roles women have always held in our communities”.

Monkman adds: “I wish to categorically remove any responsibility from anyone else on my team and the individuals whose likeness appear in this work. I regret that by including them I have put them in harm’s way.”

Hanky Panky Content Warning. Our women are strong. They are my heroes. In our Cree world, traditional law keepers were a council of women, the okihcitâwiskwêwak. It was the women who made the decisions about the land, not men. Stripped of their power by colonial politicians, they have transcended generations of colonial violence. With their strength, beauty, resilience, and laughter, our women reclaim their power. -- Miss Chief #indigenouswomen #indigenousresistance #laughterkeepsusstrong #timeforchange #thefutureisindigenous Due to racist comments that have been directed towards community members on my social media platforms, I am temporarily disabling comments on some of my social media accounts and closing others where that is not possible for the time being. Thank you.

Images of the work have been removed from several Canadian publications that have covered the news, leading some who have seen the work to call into question whether Monkman has been unfairly censored and forced to apologise.

“The only thing offensive about this painting are the people trying to cancel the artist as a result,” one commenter wrote on Reddit this week. “He caved and [offered an apology], which is too bad.”

The artist has disabled comments on some of his social media accounts “due to the racist comments that have been directed towards community members” since he unveiled the painting earlier this month on social media. His Facebook and Twitter accounts have been temporarily de-activated.