Venezuelan artist was an important figure in the history of abstraction 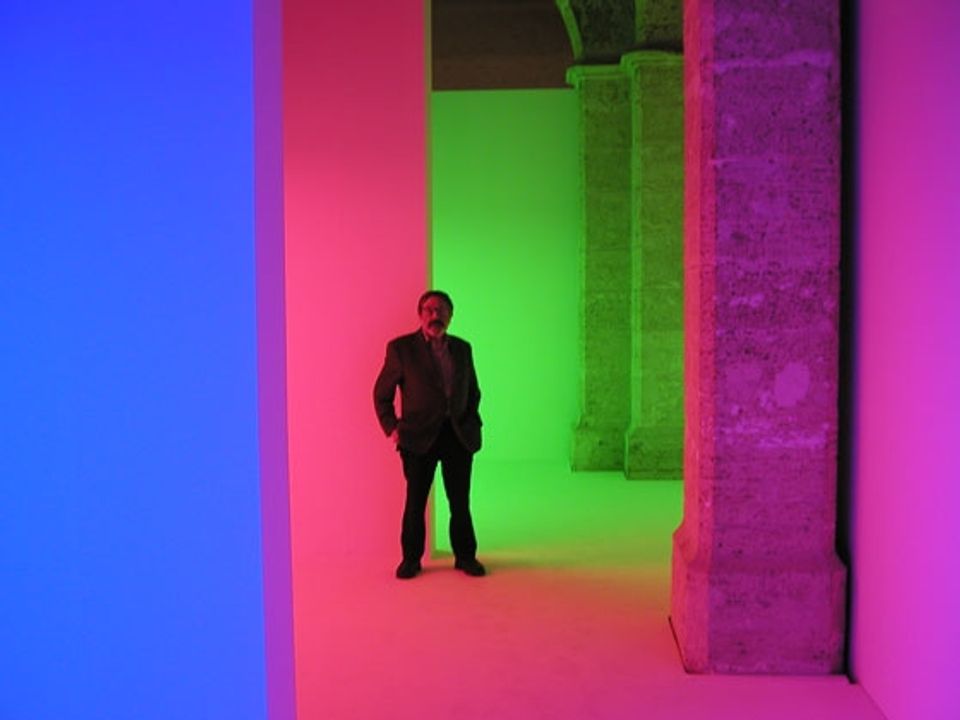 Carlos Cruz-Diez inside the work Chromosaturation, when it was on show at the exhibition De lo Participativo a lo Interactivo: Otra Noción del Color at L’Almodí exhibition hall in Valencia, Spain, in 2003 © Atelier Cruz-Diez Paris

The Venezuelan artist Carlos Cruz-Diez, known for his innovations in kinetic and Op art, has died in Paris, aged 95. According to a statement posted on his foundation’s website, Cruz-Diez died of natural causes on 27 July. “He managed to demonstrate that colour, in interaction with the observer, becomes an autonomous reality that exists without the help of form or need for support,” the foundation says.

Cruz-Diez enrolled at the School of Fine Art, Caracas, aged 17. “He wanted to change his path and chose the relatively unexplored path of colour as his focus,” the foundation says. He headed to Europe in 1955, settling permanently in Paris in 1960.

His works subsequently appeared in three major shows of the 1960s: Bewogen Beweging, the first major exhibition on kinetic art at the Stedelijk Museum in Amsterdam, Mouvement 2 at Galerie Denise René in Paris in 1964, and the epochal show The Responsive Eye at the Museum of Modern Art in New York (1965).

Cruz-Diez’s major public works meanwhile include Plafond Physichromie (1980), emblazoned on a platform at the Saint-Quentin-en-Yvelines railway station outside Paris, and his Couleur Additive (1974) floor print in the main lobby of Caracas International Airport.

Crucially, over 70 years Cruz-Diez carried out numerous investigations on the “autonomy of colour”. These include the Couleur à l’Espace works, developed in 1995, based on colour forming and disintegrating in space, and the Physichromie series, launched in Caracas in 1959 (the title combines “physical” and “chromaticism”).

Gabriel Pérez-Barreiro, the senior adviser to the New York- and Caracas-based Colección Patricia Phelps de Cisneros, tells The Art Newspaper: “Cruz-Diez was certainly important in the history of abstraction, primarily for his deep research into colour. I would argue that he and Josef Albers were the two 20th-century artists who systematised colour and its relationships. Within that tradition of favouring perception over material, he was a very significant practitioner.”

Tate owns two works including Physichromie No. 113 (1963, reconstructed 1976), a square bas relief consisting of a sequence of thin vertical coloured bands. “The work is designed to be viewed from multiple angles. Depending on the viewer’s position in relation to the work, the colour across its surface alters radically, transforming from one chromatic range to another as the viewer moves in front of it,” writes Judith Wilkinson on the Tate website.

Arnauld Pierre, a professor in contemporary art history at the Sorbonne in Paris and co-author of a 2009 monograph on Cruz-Diez, says: “He managed, with the Chromosaturations works [begun in Paris in 1965], to have colours living in real space, where the viewer experiences it [colour] as a pure physical phenomenon, devoid of all symbolism, paving the way to the environmental art of today… The lesson he taught us is that no such thing as a determinate colour exists—colour is always a totally relative phenomenon.”