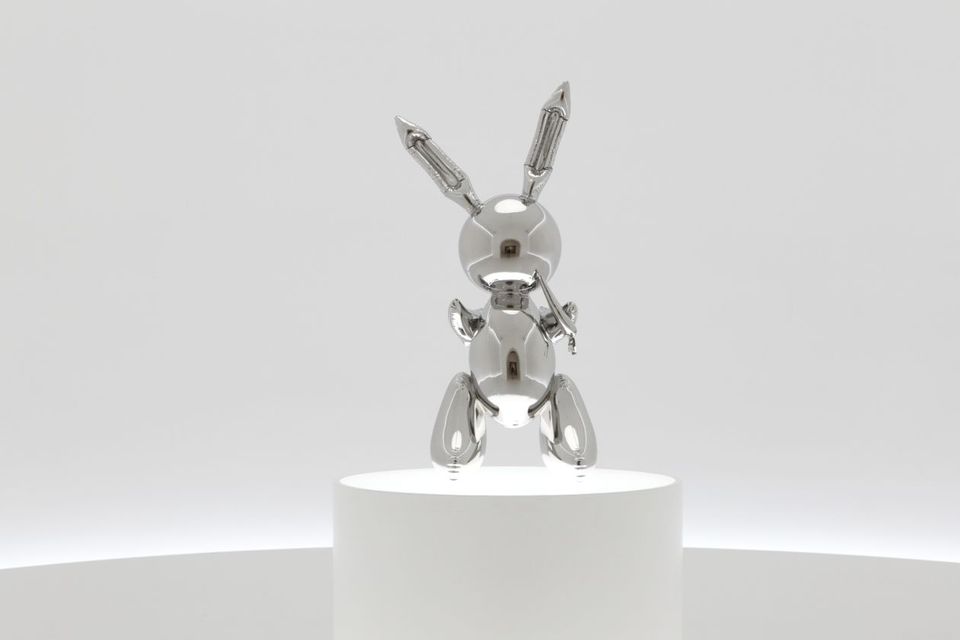 Dealer Bob Mnuchin placed the winning bid on “Rabbit” for $91m (with fees), restoring Koons to his former title of the most expensive living artist. Christie's

Jeff Koons was once again crowned the world’s most expensive living artist at Christie’s Post-war and contemporary evening sale in New York last night when his stainless steel Rabbit (1986) sold for $80m ($91m with fees) to the art dealer Robert Mnuchin, the father of the US Secretary of Treasury Steven Mnuchin, who was bidding on the floor for a client.

The slick, shiny silver bunny was undeniably the trophy lot of the evening. It was part of half a dozen works consigned by the family of the late magazine magnate Si Newhouse, and considered to be the last of an edition of four to be in private hands. Bearing an estimate of $50m-$70m and sold without a guarantee, the three-foot-tall sculpture had been ensconced in a surgically white enclave in the lead up to the sale, softly lit on a plinth like a pre-Recession religious relic.

“No one understands the psychology of wealth better than Koons,” says Evan Beard, the national art services executive at US Trust. “His Rabbit flatters and challenges the collector—and can deliver a status punch greater than any PR agency.” Koons’s previous record ($58.4m for an orange balloon dog sculpture sold in 2013 also at Christie’s) was shattered just last autumn when the auction house sold David Hockney’s $90.3m double pool portrait.

But the bunny was just one of several successes throughout the course of the evening, which yielded $468m ($538.9m with fees) with 91% of its 56 lots sold; only six works had appeared at auction in the past two decades. The total improves on its spring sale from last year by around $10m and comes on the heels of its buoyant Impressionist and Modern sale on Monday, which boasted a bumper crop of fresh-to-market works from major estates like Newhouse and others. “This was the first estate-driven contemporary auction and it was a smash with collectors, which bodes well for the coming years,” Beard says. 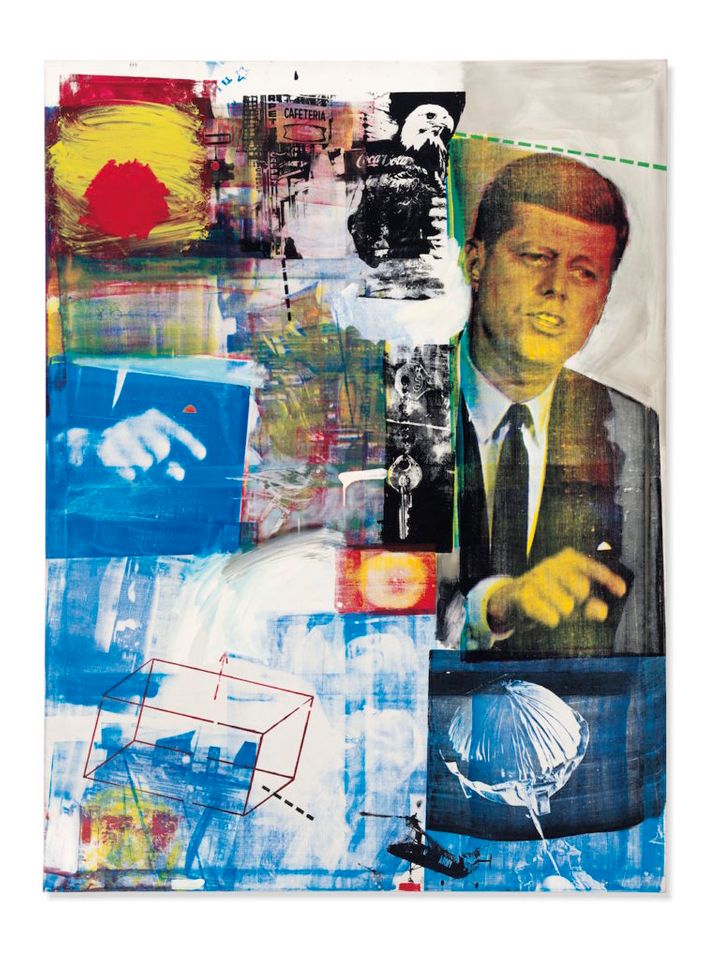 Indeed, the other major sale of the evening was also from a major estate: Robert Rauschenberg’s Buffalo II (1964) from the Robert B. and Beatrice C. Mayer Family collection, which fetched $78m ($88.8m with fees), surpassing its $50m-$70m estimate. Of the 17 guaranteed lots in the sale, it was the only one to be backed by Christie's. It attracted a flurry of bids in the beginning, but two buyers on the phones pushed it by half-million increments past $70m. Rauschenberg’s has always been a connoisseurs' market, says the art adviser Todd Levin, who was in the bidding early on for the large, politically charged silkscreen work made just after US President John F. Kennedy’s assassination. “Koons’s bunny might be iconic for the artist, but Buffallo II is an epoch-making piece,” he says.

The adviser Grace Li says the artist has long deserved a market price correction: “It makes no sense that his price was so much lower than peers like Jasper Johns and Cy Twombly for so long. [His] influence on contemporary art in the world, especially China or Latin America, was much bigger than theirs in past decades.”

Top of the pops

Several pieces by Andy Warhol also fared well after years of a cooler secondary market for his works, perhaps a result of renewed attention after the Whitney Museum’s recent survey of his work. Double Elvis (Ferus Type, 1963) sold for $48m ($53m with fees), while a blue Elizabeth Taylor portrait went for $19.3m with fees, just below its low estimate of $20m. Brett Gorvy of Lévy Gorvy gallery picked up Little Electric Chair from the Newhouse collection for $7m ($8.2m with fees).

Yet some Pop lots flopped—works by Jean-Michel Basquiat and Keith Haring barely registered. The latter’s 1982 untitled work was bought in at $2.6m just before the former’s War Baby (1984) went unsold at $4.8m. Haring’s well-known and large-scale Silence=Death canvas from 1988 barely met its low estimate of $4.5m even though it had been offered for around $8m at Levy Gorvy’s Art Basel Miami Beach stand in December. (This price was more in line, however, with a fresh-to-market untitled work by the artist from 1983 that sold for $4.2m at Bonham’s earlier in the evening.) Two late-1970s works by Hockney only just met their low estimates; when Santa Monica Boulevard barely scraped a winning $2m bid, auctioneer Jussi Pylkkanen even murmured “that took me by surprise”. 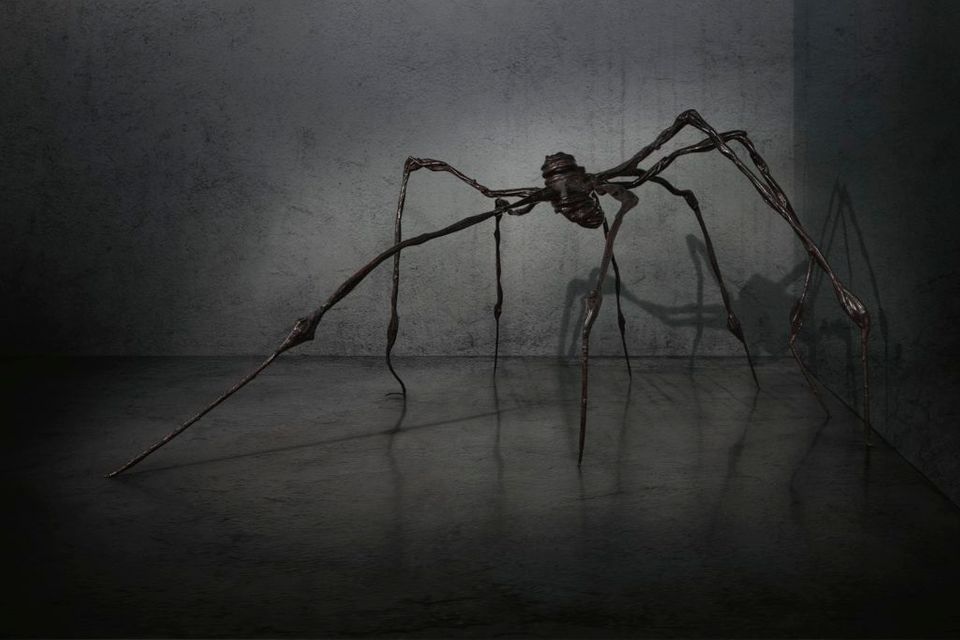 Small wins for women and the world

There were only five lots by female artists in the sale but the majority of them fared well with the exception of an Agnes Martin work that was bought in. Louise Bourgeois’s bronze Spider (1997), backed by a third-party guarantee, realised the middle of its estimate at $28m ($32m with fees), setting a world record for the artist as well as any female sculptor. The price also marks the second most expensive work by a female artist sold at auction, second only to Georgia O’Keeffe’s $44.4m Jimson Weed painting. Continuing an uptick in market appreciation of Joan Mitchell, the Abstract Expressionist’s Hans (1981) nearly doubled its estimate when it sold for $12.1m (with fees).

The last lot, a garden scene by Jonas Wood being sold to benefit Global Wildlife Conservation (GWC), sailed past its $700,000 high estimate to rake in a whopping $4.9m—doubling the artist's world auction record in the process. The proceeds, matched a generous 400% by GWC and Rainforest Trust, will fund a 600,000-acre reserve of South American rainforest to protect several native endangered species and help combat climate change, ending the evening on an unexpected altruistic note.