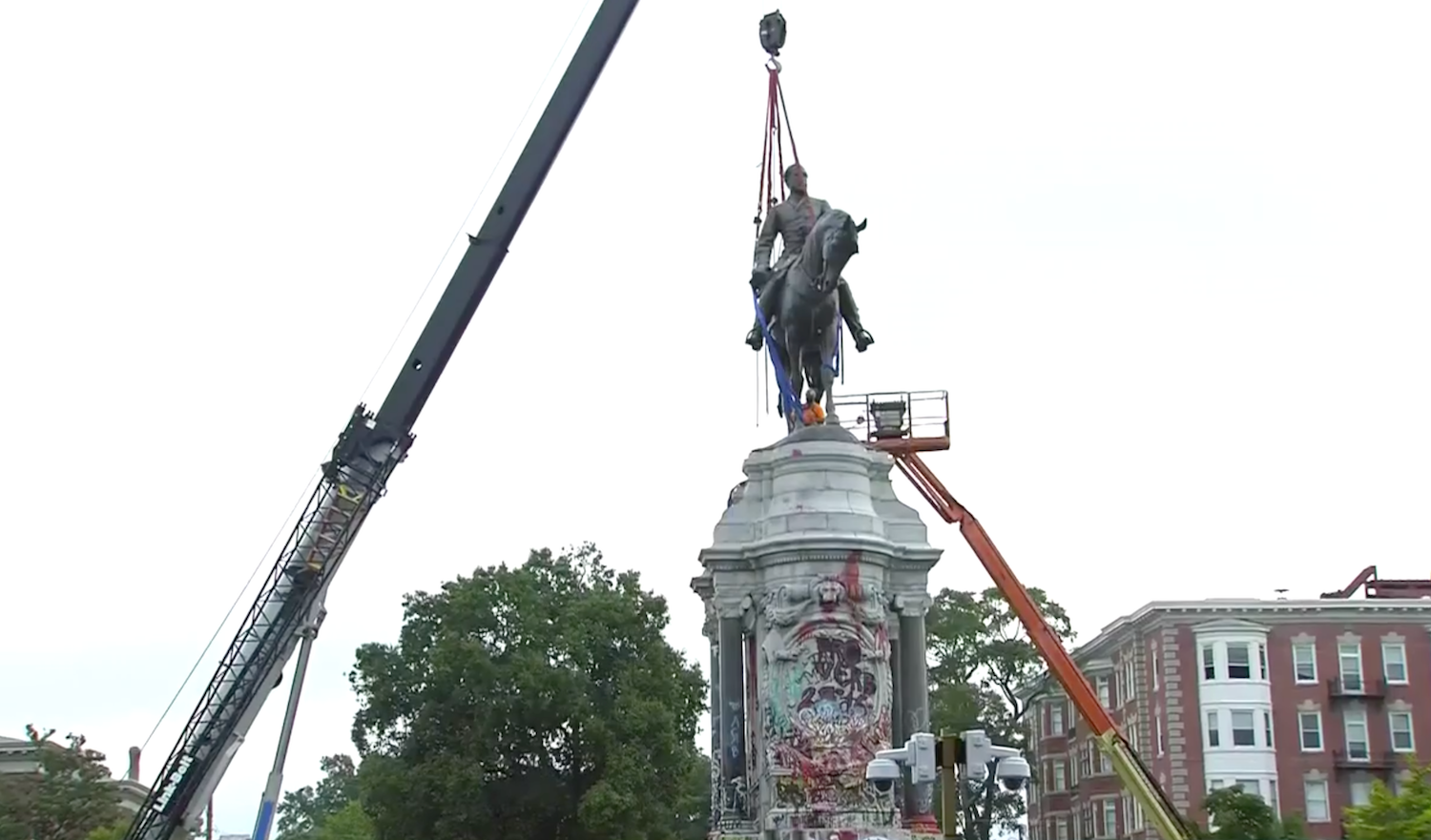 Still from a livestream of the removal of the statue of Robert E. Lee on Monument Avenue in Richmond, Virginia, on 8 September

A contested memorial of the Confederate general Robert E. Lee in Richmond, Virginia, was removed from its pedestal this morning before a jubilant crowd. The statue, which has towered over the city’s historic Monument Avenue since 1890, is the last Confederate memorial to be removed from the area since last summer, when controversial works were toppled or vandalised across the country during the height of the Black Lives Matter protests.

Virginia's governor Ralph Northam, who livestreamed the sculpture‘s removal on his social media accounts, said that the statue represented a shameful 400-year history of racial injustice in America and that taking it down marks a progressive step for the historically conservative state, which was once the capital of the Confederate government.

The 21ft-tall bronze equestrian statue, which stood on a pedestal more than 40ft-high, has been dismantled and will be moved to an undisclosed location until its final home can be determined. Northam stated that he will seek input from the public on whether such monuments should be placed in storage or given to a museum. Museums and historical societies have been invited to solicit interest in acquiring the statues for relocation and placement.

The debate over problematic statues came to a violent head in 2017, when a petition launched to remove another statue of Robert E. Lee prompted white nationalists to storm nearby Charlottesville in a bid to protect the work and other memorials. That monument was taken down this summer.

Since the Black Lives Matter protests began in June last year, nearly 200 memorials seen to enshrine white supremacy have been torn down by protestors or removed by city officials nationwide, including more than 70 in the state of Virginia. Several empty pedestals remain in place, including the one in Richmond.

It is unclear whether a new monument will take up the plinth, but a new time capsule designed by the local sculptor Paul DiPasquale will replace one buried under the statue in 1890 to “better reflect who we are as a people in 2021”, said Governor Northam. Objects submitted by the public to be placed in the capsule will include a Black Lives Matter sticker and pieces of a tarp from the unveiling of Kehinde Wiley’s Rumors of War statue, along with photos from the event, submitted by the Virginia Museum of Fine Arts.

156 years after the end of the civil war, Virginia has come one step closer to being a more inclusive and welcoming Commonwealth. pic.twitter.com/7wvRfM35mx

Some local residents had previously sued the city to prevent statues on Monument Avenue from coming down, arguing that a state law prohibited the removal of Confederate war memorials. But the law could not be applied to statues erected before 1997 and the courts denied their case.